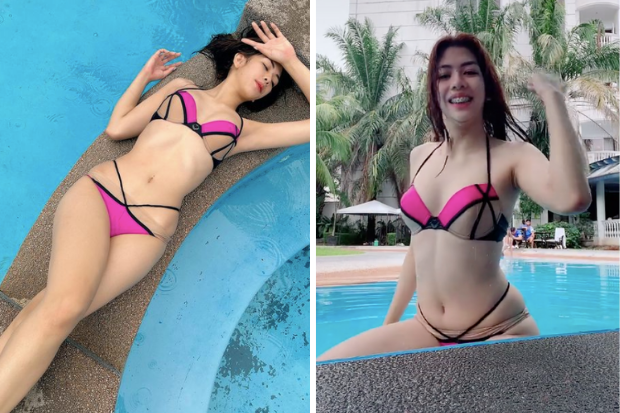 Budol flaunted her flat tummy and showed off her dancing skills at the same time via TikTok on Monday, July 12.

The short TikTok video shows the “Wowowin” host dancing to the song “Baby Ko si Pash Pash” as she sits by the edge of a swimming pool.

In the next video, Budol is seen wearing the same swimsuit while trying to copy how people move in the hit video game franchise “Grand Theft Auto.”

Budol also took to Instagram yesterday, July 13, to show off her body, again with photos of her lying by the pool while wearing a swimsuit.

Prior to Budol’s social media posts, Revillame first refuted the allegations on the July 1 “Wowowin” episode.

(There are rumors circulating that I got Hipon Girl pregnant. That is not true! You guys are just fabricating news! You even got Miss Kris Aquino involved, you should be ashamed of yourselves!)

The rumors started apparently after Hipon Girl began appearing less frequently on “Wowowin,” leading netizens to speculate that she might be pregnant with her co-host’s child.  /ra