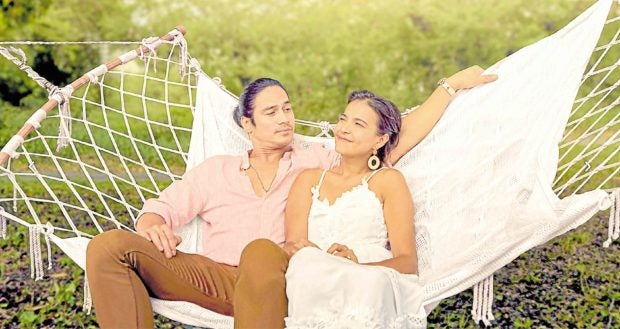 Scene from ‘My Amanda’ —PHOTOS COURTESY OF NETFLIX

When we talked to Piolo Pascual and Alessandra de Rossi for this two-on-one exclusive interview on Zoom last week to discuss “My Amanda,” their hit-bound dramatic venture on Netflix that launches globally on Thursday, it felt more like we were merely shooting the breeze with TJ aka Fuffy (Piolo) and Amanda aka Fream (Alex), their characters in the film, in a spillover scene from their breezily paced starrer.

There was no hemming and hawing about how “memorable” or “ideal” the whole shoot was because, especially for Alex, the movie was understandably no walk in the park.

After all, Alessandra didn’t just carry the burden of “creating” screen chemistry with Piolo, the country’s No. 1 heartthrob; she also had to wear so many hats just to realize her vision for its story—by also writing, coproducing and directing “My Amanda,” a film that took them three years to complete.

During the shoot, the debuting filmmaker spread herself too thin by keeping everything to herself, even when things weren’t going her way. As a result, she got sick three times within a two-week period and had to go to the hospital.

“Alex was taking on so much, so it finally took its toll on her physically,” Piolo recalled. “She was getting disappointed and frustrated because of the things she wanted to do [that we couldn’t execute].”

For Alex, however, “My Amanda” is worth all the sacrifice. In a nutshell, the movie tells the story of writer Amanda and engineer TJ, bosom buddies who share every aspect of their lives together. They’re each other’s “constant,” even when their individual worlds evolve after bitter breakups and broken engagements, over budding romances, health scares and other personal upheavals.

“It’s story is very personal to me because it’s inspired by my friendships,” Alex disclosed when asked about how the story came about. “My guy best friend’s name is TJ. I even used his real name, and he visited the set twice and met Piolo.

“But of course, the story has nothing to do with real life. I just used the dynamics of our friendship, the sort that’s intimate and sincere, not superficial. It’s a different kind of ‘love’ story.

“I decided to direct it because no one wanted to touch it. I also asked (coproducer and editor) Joyce Bernal to direct it, but she said no. Some people found it a bit unbelievable. How dare they… (laughs)! 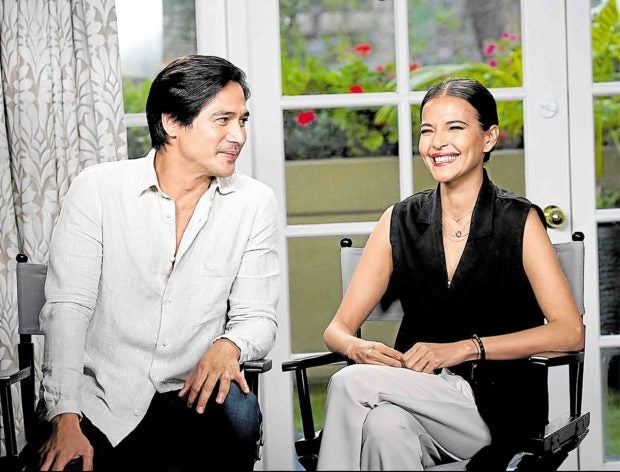 Piolo and Alex during the interview with Inquirer Entertainment

“I have the closest friendships with men. I call them boys, and they treat me like a guy. I treat them like older brothers, and it’s something that I wanted to share with viewers, because why can’t a guy and a girl be friends?

“Why can’t we share stories over a bottle of beer, get drunk, or sleep beside each other without letting sexual tension get in the way of friendship? We gotta stop adding malice into everything. Not everyone is there for sex or romance. And I don’t drink, by the way (laughs)…

“I have a lot of guy friends, and their love language is different. They tease me, they put me down (laughs)—that’s just how they show me they love me. If you can do that with me, you’re already my best friend.”

Alex also revealed that her other source of artistic inspiration was Piolo’s friendship with director Joyce Bernal. “I enjoy watching how he and Joyce treat each other—like, she’d say to Papa P, ‘Come here … kiss me!’ It’s fun to behold. My best friend and I are the same.”

For his part, Piolo described “My Amanda’s” story as “a different take on love.” There could be a tinge of romantic love in it, but he pointed out that there are lines you just know you shouldn’t cross.

“If you have the purest of intentions, it’s possible [for a man and woman to become close friends without malice],” Piolo said during the press con that followed our interview with him and Alex. “It’s possible to not cross the line and just be there for each other, like TJ’s relationship with Amanda in the film.

“No matter how loud she is or how annoying she can get, Amanda is always there for TJ—and that’s what he needs. Men don’t talk a lot about relationships or their feelings, and TJ just wants to be with her. So, it made so much sense in the end because they just let nature take its course. As long as there’s love, you know you can move mountains—and you go from there.”

Our Q&A with Piolo and Alessandra:

Alex, how did you get Piolo to agree to do this film with you?

Alessandra (A): It was when we were doing “Kita Kita.” Kasi grabe ‘yung offer ko sa kanya. I told him, “I wrote this for you!” Nakakahiya naman if he said, “No, no, no” (laughs).

Piolo (P): She came to me and said, “I have a gift for you, and I hope you like it.” When she pitched it, I didn’t think twice because I knew it was a film with a good story worth telling.

It’s always risky to produce, but if you believe in a project, you go all-in and dive head first. Her sister (Assunta de Rossi) and brother-in-law (Jules Ledesma) are coproducing this, so once we all said yes to it, there was no turning back.

Alex, you found a platform to make wise use of the wit that you utilize against bashers on Twitter, right? You’re so funny. Now, the whole world can laugh with you.P: Bawal sa kanyang mag-Twitter now (laughs).

Piolo coowns Spring Films, while Alex records self-penned songs and was the screenwriter of her film “12.” How does it feel to be in full control of your content? What is most satisfying about calling the shots?

A: You execute your vision the way you see it. Minsan kasi, people, even Piolo himself, interpret a particular line or scene differently. But if you’re the director, you can tell them, “This is how you deliver this.” I have the final say because I’m the director.

But that doesn’t mean I don’t need anybody’s help anymore. Joyce was behind me the whole time, helping me execute what I had in mind. 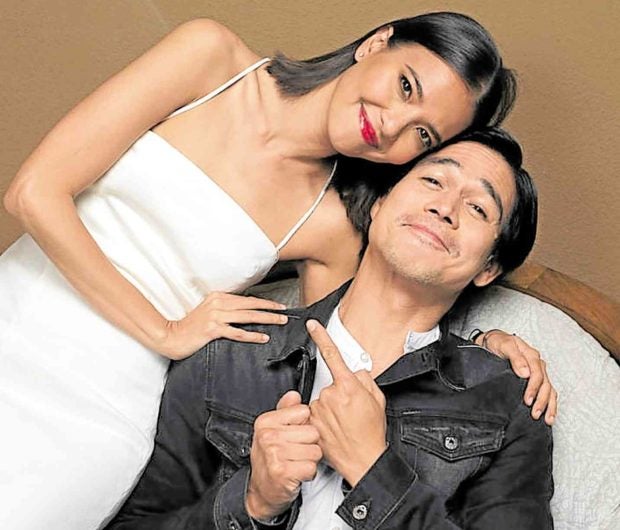 I admit, nakakahiya when you see that this film is “directed by” me, because I couldn’t have done this by myself … like, I initially didn’t know anything about sound design, so when I saw the first cut of the film, sabi ko, “Ang pangit!” Hindi ako maka-connect, kasi nga, wala pa palang sound design (laughs).P: And of course the movie had yet to be edited properly…

Piolo, you are the country’s top matinee idol, bar none. Since you’re producing more and more these days, don’t all those rom-coms and romantic dramas inspire you to direct as well?

P: Here’s one thing that I know for sure—that’s not something I want to get into. I got into producing because I love films and the process that goes into filmmaking. But directing isn’t my cup of tea. I don’t want to sit in that chair and deal with so much pressure.

In Alessandra’s case, matalino kasi sy’a and very creative, so she has to have an outlet for that. She needs to express herself, so we gave her free hand—and she delivered! Ako naman, mas gusto kong magbakasyon kaysa mag-direct (laughs)!A: Tulog nga s’ya sa set eh, so paano s’ya magdi-direct? Charot!P: Syempre, masarap magpahinga kaysa mag-set up ulit after a scene (laughs).

The whole film is about friendship and the emotional investment required for it. There’s a beautiful line there that says, “Pipiliin kita lagi kahit mali ka” (I’ll choose you even when you’re wrong). Does this apply to your friendship? Can you tell each other what the other doesn’t want to hear?

A: Kagabi lang, nasaktan ko sya! (To Piolo) But I’ll always choose you.

Over what? Creative differences?

A: Seriously, I’ll always choose you. But I’ll never say that you’re right when you’re not. Kasi, as a friend, you always want to hear the truth from me, right?

What’s your takeaway from the movie?

P: I’ve learned to let go of my expectations for other people. Let them be. Just be more open, loving and trusting without setting a lot of conditions. INQ