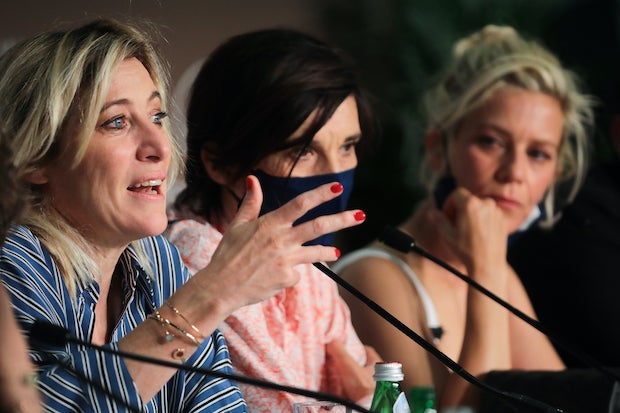 CANNES, France  — Set in a hospital where overworked medics are grappling with an influx of injured demonstrators, darkly comic French movie “The Divide” presents a snapshot of social tensions in France which have become all the more relevant since the COVID-19 pandemic, its director said on Saturday at the Cannes Film Festival.

The film centers on characters from distinct walks of life – including a down-on-his-luck truck driver and a Parisian cartoonist – who collide in hospital against the backdrop of anti-government “Yellow Vest” protests.

The demonstrations, which kicked off in 2018 as a movement against the high cost of living and descended in some cases into violent clashes with police, blighted French President Emmanuel Macron’s second year in office.

Asked what she would tell Macron if she had a chance, filmmaker Catherine Corsini, who spent time in hospitals and talking to “Yellow Vests” to prepare the movie, said she would above all campaign on behalf of hospitals.

“I would tell him to double the salary of all health workers,” Corsini told a news conference.

The film was conceived before the coronavirus pandemic, although it was filmed in the middle of lockdown, adding to difficulties for the cast and crew who had to wear masks and find new decors, producers said.

Its premise was now even more relevant, Corsini added, as the hospital had come under additional strain.

Along with the professional actors, Corsini cast a real-life nurse to play a hospital worker who tirelessly tries to cope with a lack of medication, faulty equipment, and unhinged or stressed-out patients.

“I have really felt that fatigue, that lack of consideration,” the actress and nurse, Aissatou Diallo Sagna, said.

The film, which cuts from one frantic scene to another, relies on humor to make its point, as tempers fray and the characters argue or bond over the chaos unfolding around them.

The world’s biggest film festival, which has returned to the French Riviera after a hiatus in 2020 due to the pandemic, often includes overtly political films in its selection, and this year’s competition has several entries set in contemporary France.