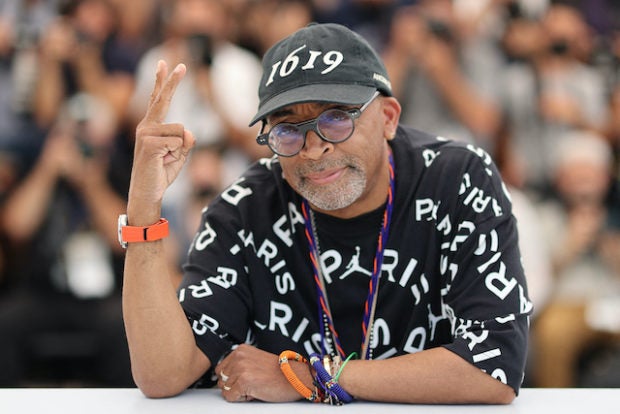 The Cannes film festival kicked off with a heavy political tone on Tuesday, July 6, with jury president Spike Lee denouncing authoritarians and the fact that black people are still “hunted down like animals” in the United States.

Lee — the first Black person to lead the festival’s jury — used his favourite nickname for Donald Trump, “Agent Orange,” and sported a cap reading “1619,” referring to the year in which the first slaves arrived in the Americas.

“This world is run by gangsters,” Lee said in response to an emotional appeal from a Georgian journalist who spoke about a recent crackdown on a Pride celebration in her country, which she blamed on Russian influence.

“Agent Orange, this guy in Brazil, and Putin are gangsters. They have no morals, no scruples. That’s the world we live in. We have to speak out against gangsters like that,” Lee said.

Asked about his 1989 classic “Do the Right Thing” on race relations in his native New York, Lee mentioned recent victims of police violence and said: “You would hope 30-some fucking years later, that black people would stop being hunted down like animals.”

Five of the nine jury members are women (a majority for the fourth time in the festival’s history), and the issue of female representation was also raised at the press conference.

“When women are listening to themselves and really expressing themselves, even inside of a very, very male culture, we make movies differently, we tell stories differently,” said actor Maggie Gyllenhaal.

She spoke about needing “an extra muscle” when she watched the male-dominated films of her youth — “to turn them into something that I could relate to,” and how deeply inspired she was when she saw Jane Campion’s “The Piano” in 1993 — still the only film by a woman to win the Palme d’Or at Cannes.

One controversy that jury member Tahar Rahim, star of Netflix hit “The Serpent,” did not seem keen to address was the fact that his wife Leila Bekhti was among those being judged, as she stars in competition entry “The Restless.”

“She’s an actress like any other. I don’t see the problem. We’ve both played in films by Jacques Audiard,” he said, referring to the French director whose latest film “Olympiades” is also in the running for the top Palme d’Or prize.

Other jury members spoke of their feelings about attending Cannes after nearly 18 months of pandemic, which canceled the 2020 edition.

“The fact that we’re all here together is a miracle, so that makes it even more of an honor to be here,” said Song Kang-ho, star of the last Palme winner, “Parasite.”

French-Senegalese actor-director Mati Diop said she felt it was the first festival of “a new era.”

“We’ve obviously been through many deep and profound changes, a lot of fragilities have been revealed,” she said.

“It’s very strange to watch a wave of cinema after an absence of it,” she added.

Gyllenhaal, who said she hadn’t been in a cinema for nearly two years, said she had recently seen a picture of French icon Jeanne Moreau dancing on a table during the festival in the 1950s.

“After skipping last year, I hope this year will be a little like that,” she said. IB