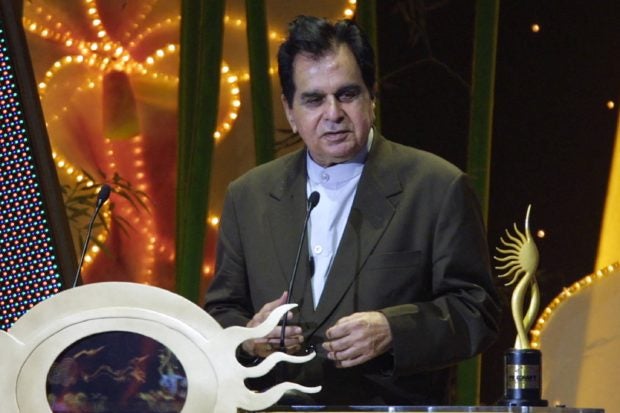 Indian veteran actor Dilip Kumar speaks at the podium for his award for outstanding achievement in Indian cinema at the 5th International Indian Film Academy Awards in Singapore on May 22, 2004. Image: AFP/Roslan Rahman

Born Mohammed Yusuf Khan in 1922 in Peshawar — now part of Pakistan — Kumar became a major star in Indian cinema’s golden age between the 1940s and 1960s, starring in nearly 60 films in a career spanning 50 years.

“He was blessed with unparalleled brilliance, due to which audiences across generations were enthralled. His passing away is a loss to our cultural world,” Modi added.

Indian President Ram Nath Kovind said: “Dilip Kumar summarised in himself a history of emerging India. The thespian’s charm transcended all boundaries, and he was loved across the subcontinent. With his demise, an era ends.”

He “will live forever in the heart of India”, Kovind added.

Kumar was spotted selling fruit at his father’s stall in Bombay —now Mumbai — by actress Devika Rani who convinced him to try acting.

Changing his name to hide his profession from his disapproving father, Kumar went on to become a beloved household name who transcended generations and India’s social and religious divides.

“An institution has gone. Whenever the history of Indian cinema will be written, it shall always be ‘before Dilip Kumar, and after Dilip Kumar’,” Bachchan added.

Akshay Kumar, another of modern Bollywood’s biggest luminaries, said: “To us actors, he was The Hero. #DilipKumar Sir has taken an entire era of Indian cinema away with him. My thoughts and prayers are with his family.”

“Our world is a little less bright today because one of our brightest stars has left us for the heavens,” actor and producer Anil Kapoor said on Instagram.

“He was and will always be the finest & greatest actor of our industry for me… he has inspired generations of artists.”

The veteran actor enjoyed a following across the Indian subcontinent and among the diaspora across the world.

Former Pakistan cricket captain Shahid Afridi said his death was a “huge loss” for his fans in Pakistan, Mumbai “and across the globe”.

“He lives on in our hearts,” Afridi added.

“An inspiration for generations to come,” he posted on Twitter.

The organization said Kumar had helped them enact a ban on the entry of elephants into Mumbai, “sparing them violence and cruelty and ensuring the safety of Mumbai’s human residents”.

Kumar, who had struggled with ill health in recent years, married the actress Saira Banu in 1966 when she was 22 years his junior. He died in a Mumbai hospital early on Wednesday. IB