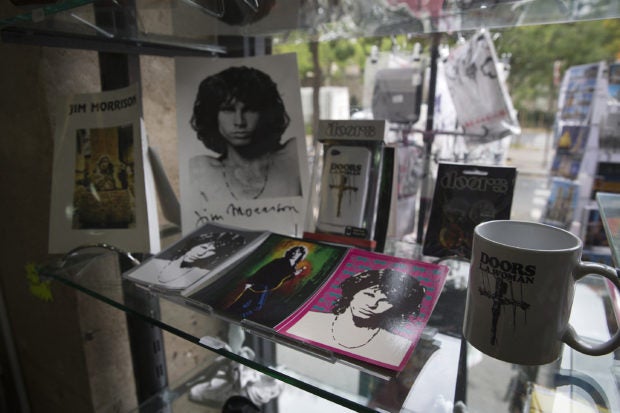 He occupies a small, tucked-away corner of a Paris cemetery, but many thousands still seek it out: half a century since his death, Jim Morrison remains a fabled presence in the City of Light.

The death of The Doors’ frontman on July 3, 1971 was one of the key signs that the optimism of the 1960s was coming to a grim end.

Today, the Lizard King lies in the Pere-Lachaise cemetery at the eastern end of the city.

Even with Google Maps, it can be tricky to find, a deliberate decision of the family who rightly feared a deluge of fans.

“He would have wanted to be buried next to Oscar Wilde,” she said, referring to the other famous tenant of the cemetery, but the spot would have been too prominent.

The grave’s seclusion has not prevented millions from paying their respects over the decades, the photo of another rock legend, Patti Smith, posing here is itself iconic.

Its headstone is protected by barriers that will no doubt be under threat again this week.

Morrison’s last home was an apartment on the third floor of 17 rue Beautreillis in the bohemian district of the Marais.

It was owned by model Elizabeth “Zozo” Lariviere, and Morrison moved there with his girlfriend Pamela Courson, hoping to escape the madness of his fame in the United States and dedicate himself to writing.

He would survive just three months in Paris.

The official version is that he died in his bath tub of cardiac arrest, aged 27.

But on the facade of his old building, someone has left a note: “Jim Morrison didn’t die here,” a sign that another story has long been making the rounds.

Journalist Sam Bernett has investigated the case over the years, and argues that the rock legend overdosed in the toilets of a nightclub, the Rock’n’Roll Circus, that he helped run.

“His face was grey, his eyes closed, there was blood under his nose and a white foam around his slightly open mouth and in his beard, he was not breathing,” Bernett writes in “The End: Jim Morrison.”

Singer and sixties icon Marianne Faithfull backed that story in an interview with Mojo magazine, saying the fatal dose came from dealer-to-the-stars Jean de Breteuil, whom she was dating at the time.

As she is speaking at the site to AFP, an American introduces himself.

Pete has been coming here regularly since 1991 around the anniversary of Morrison’s death, holding meetings with other “friends of Jim in cafes around Pere-Lachaise.”

Other stops on the pilgrimage might include Place des Vosges and the book kiosks that line the Seine where Morrison liked to wander, trying to stay as anonymous as possible.

And also the famous English-language bookshop Shakespeare and Company.

This brought him regularly into the Left Bank, near the home of his friend, the film-maker Agnes Varda, and Cafe La Palette where he liked to drink, and where a few glasses will no doubt be raised to his name on Saturday. JB

Read Next
For first movie in space, Russia races Tom Cruise and Elon Musk
EDITORS' PICK
DOH: Too early to say COVID-19 cases are declining
Acer starts the year off strong with the Aspire Vero National Geographic Edition
Duterte praises military but slams police for poor discipline, corruption
Over 3 Million worth of prizes to be won at Smart Padala’s SENDali Manalo Promo!
COVID-19 cases surging in all regions and provinces, says DOH
The best of bayside and city living at SMDC’s Sail Residences
MOST READ
Marcos Jr. visits Cebu, stands as ‘ninong’ to mayor’s son
Duterte praises military but slams police for poor discipline, corruption
Djokovic has to comply with rules to go to Spain, PM says
Comelec junks petition to scrap Bongbong Marcos COC
Don't miss out on the latest news and information.