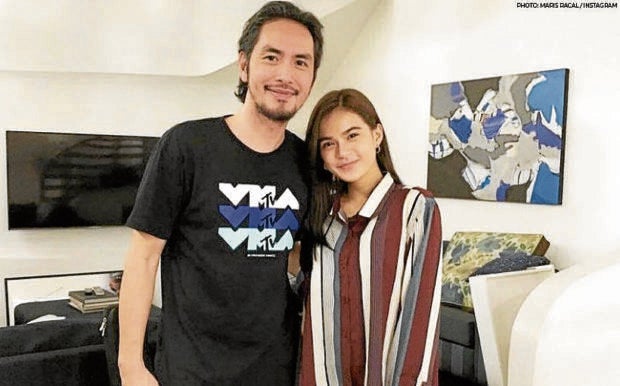 While they’re in a romantic relationship, Maris Racal quipped that she still gets nervous “all the time” whenever her boyfriend, Rico Blanco, evaluates her work as a music artist.

“After I finish writing a song, I will have him listen to it. And sometimes he’s impressed, sometimes he’s not. So there’s still that kind of pressure even though we have this kind of relationship,” she told the Inquirer in a recent Zoom press conference for her latest single, the power-pop tune “Ate Sandali.”

“I have always wanted to work with Rico. I wanted to grow and work with different people in the studio,” said Maris, who first collaborated with Rico on the song “Abot Langit” in 2019. “I believe he can help me a lot in terms of music choices, so I’m not just limited to what I know.”

Rico, on the other hand, was pleasantly surprised with the amount of material Maris has in her vault, which, he felt, could have easily propelled her music career. “After the first time we met and worked together, Maris asked my opinion about her songs, so she literally got a guitar and sang her songs on the spot. I was surprised there were a lot,” Rico said in a statement. “Naturally, I wondered why she never had a proper music career,” he added. “I was blown away by how she had an entire collection of songs she had written herself on both guitar and piano.”

Having a music icon like Rico guiding her, Maris pointed out, has had a big impact on her creative process and outlook. But she also appreciates the fact that he gives her the space to figure things out herself.

“He helps with my songwriting, with my music videos. But he doesn’t overstep. He just lets me write and finish my songs alone in the studio. We still have that line we follow,” Maris said. “He wants me to focus on my own career, build it how I want it. He thinks that I wouldn’t grow as a solo artist if he’s always in the picture.”

What are some of the most constructive tips Rico has given her? One thing that stands out, Maris said, is that one shouldn’t be too “in love” with the song’s first draft.

“He told me that I should avoid getting stuck in a single phrase or verse. Don’t be too in love with what you wrote because it still has so much more possibilities. One sitting isn’t enough. I think that helped me a lot,” related the 23-year-old singer-actor who has also noticed considerable improvements in her songwriting basics. “I used to be reckless with my songwriting; my rhyming was literal. But now I know I have learned that writing songs isn’t only about writing your heart out—there are patterns. But you also add your own flavor,” Maris added.

Maris grew up surrounded by music. Her parents listened to the classics like The Beatles and James Taylor. Her brother is a musician himself. “I remember how much I admired my brother, who was in a band at the time, as I watched him write original songs. It was very amazing to me,” she recalled.

“Ate Sandali” was written a couple of years ago, but stayed in Maris’ notebook all this time. “It’s a pop song. But I didn’t like it that much, because, at that time, I was into acoustic or piano-driven songs. But then the pandemic happened, and the past year had me listening to K-Pop, Lady Gaga and Ariana Grande. And when I watch their videos, I feel like I’m being transported to a different place, so I thought this was the perfect time to put the song out,” she said. The song was inspired by her and her sister’s past heartbreak. “That time when we felt that we were making one bad decision after another. This song is about empowerment … a friendly advice to girls trapped in toxic relationships and its endless cycle. It’s also to remind women that they’re beautiful and that they can walk away from such relationships,” she said. “But it’s also written with a bit of humor.”

While she’s more serious about pursuing her music career now, Maris isn’t about to set aside acting. “I try to manage my time. I want to focus on music because I don’t want to put my skills to waste. Both music and acting are about expressing yourself,” she said. INQ

Read Next
Tuldok, June 28, 2021
EDITORS' PICK
Malls, parks in NCR still off limits to minors even with eased restrictions
153 protests filed vs China actions in PH waters in 2021 — DFA
Lacson wants DOF to suspend TRAIN law as oil prices rise
Leaked: A 60x Zoom and all-new Helio G96 mean a complete overhaul for TECNO Mobile’s new CAMON 18 series
Delivering delight against all odds
Next level mobile photography within reach with vivo X70 co-engineered with ZEISS
MOST READ
Robredo to supporters: Be calm, gentle and do good deeds
Matibag calls Senate budget hearing ‘political,’ gets kicked out
Duterte inaugurates P684-M bypass road project in Quezon
Duterte: No drug dealers among the rich in PH
Don't miss out on the latest news and information.