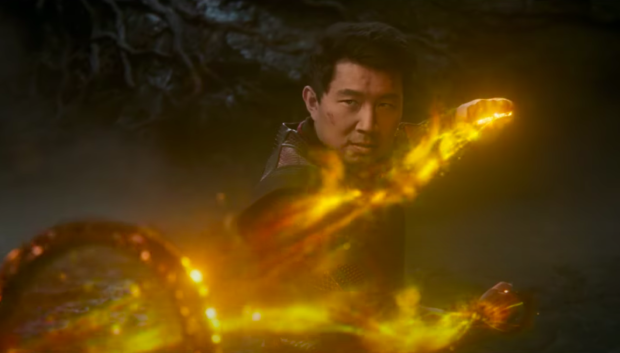 Simu Liu as Shang-Chi in Marvel’s “Shang-Chi and the Legend of the Ten Rings” (Image: screengrab from YouTube/Marvel Entertainment)

Marvel’s new trailer for “Shang-Chi and the Legend of the Ten Rings” has revealed a lot more about the film’s plot since its first trailer dropped last April.

For one, the trailer confirms that Simu Liu’s character, Shang-Chi, is trying to avoid being the successor of his father, Tony Leung’s Wenwu a.k.a. The Mandarin, as leader of the Ten Rings.

The two-minute clip posted on YouTube earlier today, June 25, also teases the power of the Ten Rings, which has been revealed as an artifact/weapon that Shang-Chi’s family has been using for ages.

Michelle Yeoh’s Jiang Nan also shows off her martial arts skills in the new trailer. At one point, she even goes toe to toe against a Ten Rings-wielding Wenwu.

She also seemingly controls air while doing stances in the trailer, a scene similar to how airbenders control their power in the beloved animated series “Avatar: The Last Airbender.”

Perhaps the biggest reveals in the trailer, however, are the appearance of the dragon-like being believed to be Fin Fang Foom and the return of the Abomination.

The said “Hulk” villain can be seen facing off against a sorcerer in what appears to be a cage match, where Shang-Chi is also shown fighting at one point as well.

The Abomination first appeared in the Marvel Cinematic Universe (MCU) as the villain in the 2008 film “The Incredible Hulk.” He, together with his human counterpart Emil Blonsky, was portrayed by Tim Roth in the said film.

Roth will also be appearing in the Disney Plus series “She-Hulk” alongside Tatiana Maslany, Mark Ruffalo and Jameela Jamil when it premieres in 2022.

“Shang-Chi and the Legend of the Ten Rings” will, meanwhile, hit theaters on Sept. 3 this year and will mark Liu as the MCU’s very first Asian lead superhero.  /ra