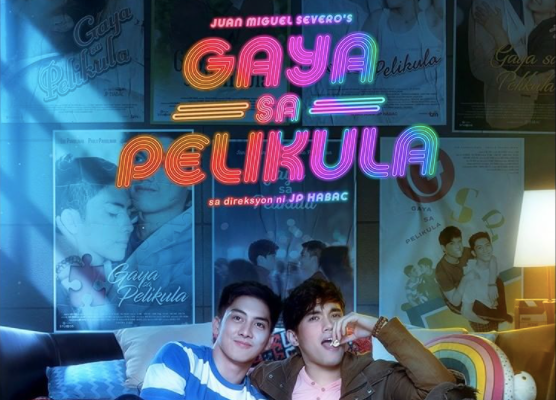 “Gaya Sa Pelikula” producer Quark Henares has admitted that he is unsure if the series will be continuing for another season, after it had been “endangered” amid sexual harassment allegations supposedly involving its writer-creator Juan Miguel Severo.

This comes after lead star Paolo Pangilinan addressed “harassers,” though not stating any names, through a Twitter post on Sunday, June 20. Fans speculated that he was referring to Severo who deactivated his Twitter account after Pangilinan made the cryptic statement.

Henares, meanwhile, did not mention names either but spoke up in his own Twitter thread yesterday, June 23, in the context of “recent events.”

“One of the proudest things I’ve ever done was become part of a BL series. It was sweet, and [feel good] and touching,” he said. Henares also noted that “Gaya Sa Pelikula” was able to do “so much good” by empowering its audience and creating safe spaces for them.

It inspired people. It empowered kids who were afraid to admit who they were. It advocated safe spaces for the LGBTQIA+ community.

The producer said “Gaya Sa Pelikula” has been “endangered” as its fans started to question the series’ message.

“The message of that show has become endangered. It broke our hearts to see [stan] accounts change their names, to see people struggling with what the show may have meant for them,” he lamented.

He then stressed that he does not want to work with “anyone who uses their power to take advantage of anyone else.”

I know there is a lingering question, and it’s something I can only answer for myself. I will not work with anyone who uses their power to take advantage of anyone else. In any capacity.

Henares added that after convening the “Gaya Sa Pelikula” team, they reflected on whether their show is “bigger than one person.”

“I’m honestly not sure. But I know that despite everything…[atin] pa rin ang kwento (the story is still ours),” he declared. He also showed a photo of the team after their meeting, where Severo is noticeably absent.

Yesterday we convened. Members of the family, as well as new friends who were about to take this journey with us. To talk. To assess. To reflect. Is our show bigger than one person? Can we really take our story back despite facing the greatest challenge we’ll ever face?

Henares acknowledged that fans may be “traumatized” by the incident, noting that the show’s team considered moving on to a new project together, as he stated in a separate Twitter post, also yesterday.

The show’s director, JP Habac, meanwhile recalled experiencing abuse in the past amid the speculations surrounding the series.

“[Kaninang] umaga, nagising akong umiiyak dahil sa isang masamang alaala [11] years ago. Akala ko kaya ko ‘tong dalhin hanggang makalimutan ko na ‘yun, pero hindi pala,” he said. (This morning, I woke up crying because of a bad memory I had 11 years ago. I thought I could carry it until I forgot, but I couldn’t.)

Habac then recounted how he was abused by a person he met online and struggled to forget about the abuser after a long time. He then stressed that any form of abuse should not be justified, as he told fans that he is “with them.”

“[Asahan] niyong kasama niyo ko sa patuloy na pakikipaglaban para bawiin ang kwento natin,” he stated. (You can expect me to join you in this fight to take back our story.)

Ian Pangilinan, one of the show’s lead actors, also spoke up amid the issue and told fans how he felt when he was meeting with the show’s team.

“I’ll be damned if I let everything I, and everyone in that room bled and fought for, die because of a single blow,” he said.

While in the company of brilliant people recently, one thought kept playing over and over in my head.

I’ll be damned if I let everything I, and everyone in that room bled and fought for, die because of a single blow.

The allegations against Severo came as a surprise to many, as he is known for his “woke” personality online. He often spoke up against the current administration and its actions on abuse and harassment. JB

Practice what you preach, a lesson Juan Miguel Severo should heed