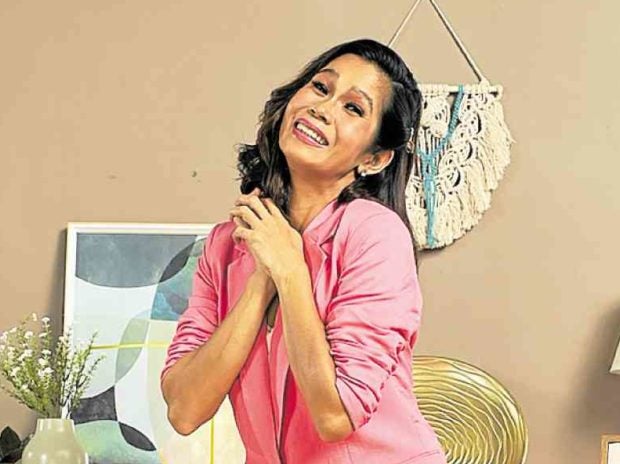 Now that she’s officially a GMA 7 artist, Pokwang said one of the things she’s looking forward to the most is working with two of show biz’s biggest female comedians, Ai-Ai delas Alas and Eugene “Uge” Domingo.

“I’m now in the same network as Miss Ai-Ai and Miss Uge. Maybe we can remake ‘Sis’ (defunct morning talk show). But since we’re all titas, we can call it ‘Tits’! Or why not a sitcom?” Pokwang said in a recent Zoom press conference, shortly after signing a three-year contract with the network.

“They have already welcomed me. I exchange Viber messages with Ai and sobrang tuwang-tuwa siya. Uge is my kumare, one of my daughter Malia’s godmothers. I’m also excited to drop by her show, ‘Dear Uge,’ as a guest,” related the 50-year-old celebrity, who’s also set to make appearances in “Wish Ko Lang” and “Magpakailanman.”

Collaborating with Michael V—another comedy icon—and being invited to the upcoming prequel of his long-running sitcom “Pepito Manaloto” is another dream come true for Pokwang. “He’s a genius! He’s so intelligent and his imagination is limitless,” she said.

Alden Richards, Marian Rivera, Jennylyn Mercado and Rayver Cruz are some of the other Kapuso stars she wants to see soon.

“I haven’t worked with Alden yet, but I once hosted an event that he also attended. He’s such a very sweet and respectful kid,” she recalled. “I used to work and go with Rayver in shows in the United States. He was so happy to learn that I’m here.”

“Marian, I have already worked (with) in a movie (“Super Inday and the Golden Bibe”), but not Jennylyn, whose works I have seen as well. And she’s also a great actress,” she said.

But aside from comedy, Pokwang said she would love to host a food and travel show a la Anthony Bourdain. “Hindi masamang mangarap!” she said, laughing. “I’m a big fan of his, so I couldn’t accept that he is gone now. I have one of his books. And even though it is thick and heavy, I brought it with me whenever I went overseas—so I can have it signed, just in case I bump into him!”

While some people assumed that Pokwang’s transfer to GMA 7 was prompted by ABS-CBN’s shutdown last year, she clarified that she already had talks with executives of the Kapuso network as early as 2019.

“I’m thankful. It was not me who said yes to GMA 7—it was GMA 7 who said yes to me. I was the one who approached them three years ago. In all fairness, they all welcomed me with open arms. As an artist, I still want to do various things that I want to share with my followers. And I’m thankful for the opportunity,” she said.

“I’m overflowing with gratitude and I’m excited for the projects lined up for me,” she added. “This is like a dream—something I have prayed for.”

Pokwang, who also accepted projects with TV5 earlier this year, related that ABS-CBN did have some plans for her back then. However, there was no concrete timeline. “I’m not getting any younger, and I want to do the things I want to do while I’m still strong and able,” she said, adding that the network had to juggle numerous stars that time.

In any case, Pokwang parted ways with her former network on good terms. “I messaged my bosses and they were supportive of my decision,” she said, adding that executives admitted that they couldn’t guarantee her work, after the shutdown. “Everything went well.”

Pokwang used to drive past the GMA 7 headquarters, wondering what was inside. “Before entering, I knocked on the gate first—a habit or superstition of mine … [a] sign of respect,” she said. INQ