Seventeen is back, full of love, confidence 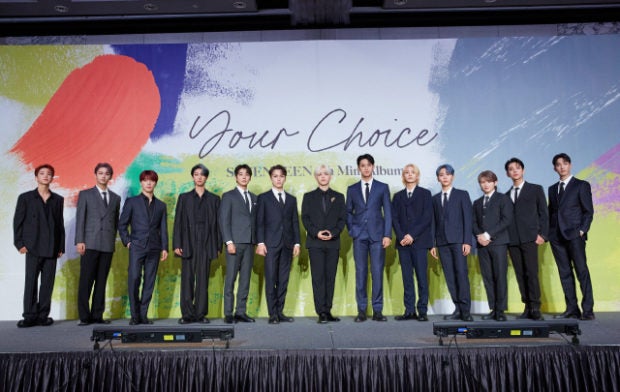 SEOUL — Seventeen held a media conference in Seoul on Friday to celebrate the release of its eighth EP “Your Choice.”

The band is returning eight months after its last release and leader S.Coups thanked fans for loving and waiting for them.

The main theme of the new music is the power of love, “a story of mature love seen from Seventeen’s perspective,” said Woozi.

“In addition to the addictive sounds and strong performances, we are focusing on showing new sides,” said Seugnkwan confidently, adding that many listeners will feel how many challenges they have taken and how much thought went into it.

The bandmates were happy that they had a chance to work with producer Bang Sihyuk, the head of its agency’s parent company Hybe.

“I’ve grown up listening to music he made, and it was an honor to work with him. Besides being the chairman of the company, he is a senior songwriter and I’m grateful that he respected me as a one,” said Woozi.

The 13 members confessed that they have set their sights high, hoping to enter Billboard’s main chart.

“We’re putting our neck on the line,” said The8, while Hoshi candidly admitted that he wants the EP to top the chart.