Moviegoing with the maids 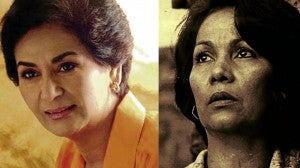 RODRIGUEZ (LEFT) AND PEREZ. Their acting styles were more subtle and effective.

WHEN I was young, I remember how excited I was every Saturday, our maids’ day off, when I would tag along with them to shop in the market in Pasay, have merienda, then catch a Tagalog movie—it was quite a treat!

I loved taking those trips, because that meant eating food I rarely ate, shopping in places other than Berg’s, Botica Boie and Syvel’s, and watching films that starred Nena Cardenas, Reynaldo Dante and Alicia Vergel.

This was in the early ’50s, when Tagalog was a “language spoken by the maids.” Remember the famous quote from Gloria Diaz? I hardly spoke it—but, I could dramatically say, “Utang na loob!”

On Saturdays, merienda was bound to be great, and the great bargains in the market were excellent. We indulged in pancit and an inexpensive glass of halo-halo.

At the movies, I loved the blatant emotions shown by the Filipino actors: Carmen Rosales was a deep well of tears—and so were Anita Linda and child star, Tessie Agana, whose mother was the hazel-eyed beauty, Linda Estrella.

Rosa Rosal made life difficult for Tessie Quintana, while Zeny Zabala and Bella Flores were usually over-“painted” and under-dressed, to indicate their wicked intentions. Lolita Rodriquez, Barbara Perez and Loretta Marquez vivified another style of heroine acting—which was subtle and more effective.

In college, Joonee Gamboa and his brother, Arthur, had a friend—an assistant scriptwriter named Emmanuel Borlaza—who also acted with them for Severino Montano’s Arena Theater. He invited Joonee, Arthur, Lino Brocka and me to watch a film shoot at Sampaguita Pictures in San Juan. We were thrilled to see screen stars like Eddie Garcia, Cesar Reyes, Vic Vargas and Amalia Fuentes—and I couldn’t wait to get home to tell the maids!

Years later, I became friends with Robert Arevalo and Barbara Perez, who introduced me to Eddie Mesa and Rosemarie Gil. Thereafter, I became a tito to their children. I continued to watch American films—but, this was before friends like Brocka, Borlaza, Ishmael Bernal and NUT introduced us to a “different” kind of Philippine movie.

Thus, when some students would complain about the state of local films, I would ask them, “What was the last Filipino movie you saw?” It’s the law of supply and demand: If you want better Filipino movies, you’ve got to ask for them—and patronize them!