25 years after its release, the 'Macarena' still gets people dancing | Inquirer Entertainment

25 years after its release, the ‘Macarena’ still gets people dancing 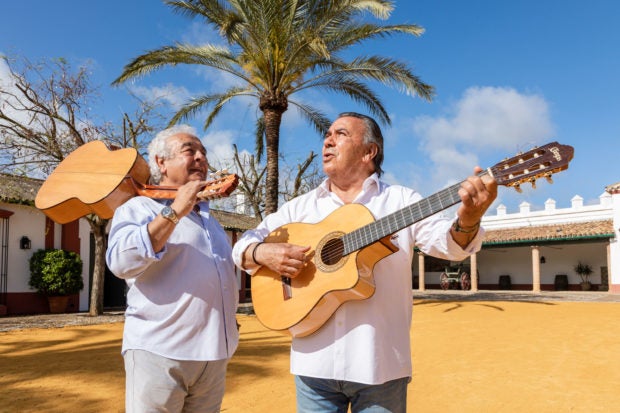 To this day, Antonio Romero Monge and Rafael Ruiz Perdigones still struggle to put words to the worldwide success that “Macarena” brought them, even 25 years after its release in the United States.

It must be said that there was nothing in particular about how the song came about that hinted that it would become one of the most popular hits of the 20th century. Antonio Romero Monge, now 73, was at a party in Caracas, Venezuela, when a dancer inspired him to write the lyrics “Dale alegria a tu cuerpo” (“Give joy to your body” in English). Thirty minutes later, the Spanish singer-songwriter had composed what was set to become Los Del Rio’s biggest hit.

“When you write a song, you do it with the belief that it will become very popular and many people will listen to it. And that it will touch the hearts of the whole world. When you write a song, you always do it with this idea in mind. But you never imagine that it can actually happen, and that your song is going to become one of the most listened-to songs of the last 25 years,” he says.

From Bayside Boys to TikTok

While Los Del Río first released the song “Macarena” in 1993 with the album “A mí me gusta,” it was the 1995 Bayside Boys Remix (which added some English lyrics) that really made this party anthem take off in music charts around the world. It reached number one in Australia, Austria, Belgium, the U.S. and, of course, in the duo’s native Spain. Many other covers have followed over the years, making “Macarena” enter the pantheon of popular song.

“To my knowledge, there are more than 5,000 different covers of ‘Macarena.’ Versions in French, Filipino and, most recently, one in English with rapper Tyga. That’s what ‘Macarena’ is. It’s a song that goes beyond us, and it’s not going to die with us. Children are still singing ‘dale a tu cuerpo alegria, Macarena’ today. They weren’t even born when the song came out,” says Rafael Ruiz Perdigones.

Some of them even turn to TikTok to discuss the lyrics they danced to during their childhood with other music fans. That’s the case of TikToker @peakay81, who recently expressed his shock at the suggestive lyrics of “Macarena.” And he doesn’t seem to be the only one, as his video has been viewed more than 1.8 million times to date.

It’s a phenomenon that Antonio Romero Monge finds highly amusing, although he insists that he and Rafael Ruiz Perdigones have worked hard to get to where they are.

“The success that ‘Macarena’ has brought us is above all the fruit of 30 years of work. It was our reward after so many years of hard work. Our gift of the Holy Macarena” (laughs). We may have to wait another 30 years before we have another hit like that,” he laughs.

The Seville-based duo is working on it though, and in May they released a new single entitled “Dentro de mi guitarra.” “We love music very much. We spend our days in the recording studio doing what we love and striving to bring a little joy into the world,” Rafael Ruiz Perdigones enthusiastically explains. “The music lives in us, and we are going to use it to leave behind the catastrophic year we have lived.”

Meanwhile, Los Del Río has partnered with Airbnb to celebrate the 25th anniversary of “Macarena” in style. Starting June 28, the vacation rental site will offer users the possibility of booking an Andalusian villa near Dos Hermanas, a familiar haunt of Antonio Romero Monge and Rafael Ruiz Perdigones. The duo will also offer an exclusive online experience where they will take users behind the scenes of their biggest hit through cooking, dancing and singing. IB