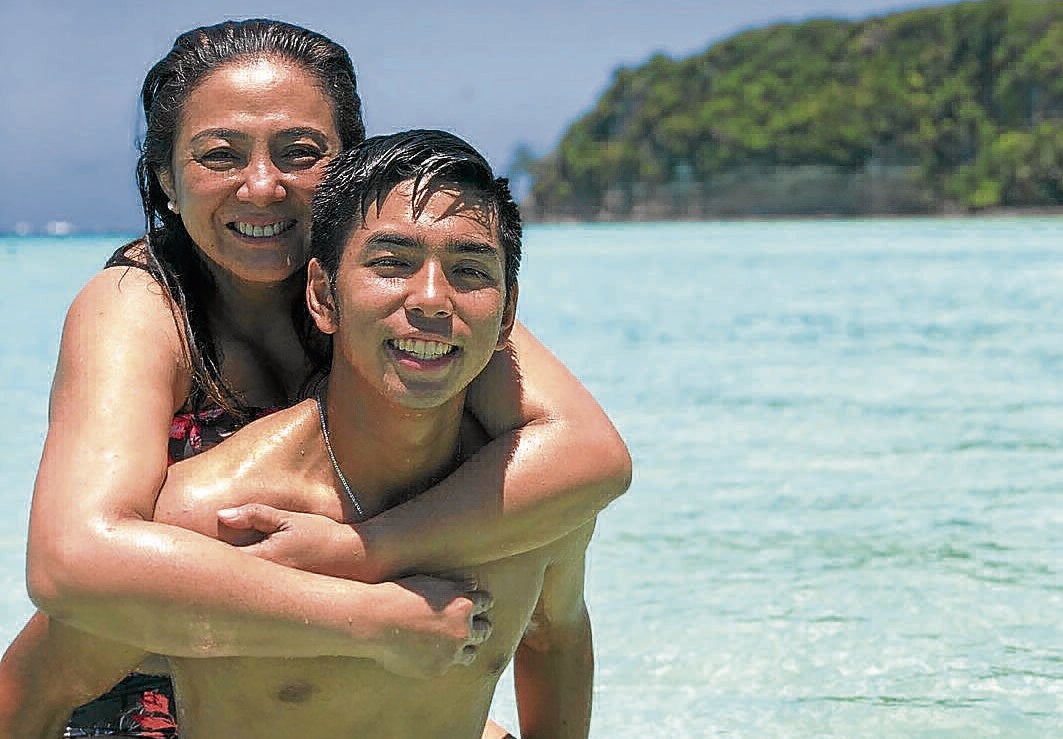 Nio Tria, the only son of dramatic actress Cherry Pie Picache, admitted that before the global health crisis happened in 2020, he had several plans that were not at all related to him joining local tinseltown.

Nio, 19, was supposed to study at the Loyola Marymount University (LMU) in Los Angeles (LA), California, on full athletics scholarship in 2020. Nio, who started playing tennis at 5, has been representing the country in competitions here and abroad since he was a teenager.

“The pandemic happened. Lockdown was imposed everywhere, including LA. Eventually, schools were prohibited from engaging students in any face-to-face interaction,” Cherry Pie explained to Inquirer Entertainment. “Luckily, he was able to return to Ateneo de Manila. We’re thankful that he is still a scholar. He got really sad that his plans had a drastic change.”

Nio added: “My mom and I talked about what happened. I understood why I can’t go to the States just yet. It was also my decision to stay. I know that it’s not safe to leave now with the pandemic.”

It was also around this time when Cherry Pie said they got the all-important call from Dreamscape Entertainment, an ABS-CBN production company and content provider. “Nio was asked if he was interested in doing a vlog (for the Kapamilya network’s online platforms). After all, it’s something he could do online and won’t require him to go out of the house,” she recalled.

Nio, who confessed to not having enough engaging activities as an effect of the pandemic, eventually said “yes.”

Cherry Pie added: “They also promised to cast him in digital shows and films. It was really a blessing.”

Nio is part of the newly formed group Squad Plus. He is seen in the sci-fi film “Click, Like and Share,” alongside The Gold Squad members Andrea Brillantes, Seth Fedelin, Francine Garcia and Kyle Echarri.

Nio said that, at first, his dad Gary raised concerns over his decision to join show biz. “Dad had been concerned about my studies. He really wanted me to go to the States because it’s a good opportunity to study there. Now, he agrees to the setup. He is very supportive. He didn’t make me promise to do anything. It’s actually my mom who made me promise to finish school,” he said.

Asked what pointers she gave Nio in terms of how to excel in show biz, Cherry Pie said: “I told him doing vlogs is OK. But if he wants to become an actor, too, he has to be fully committed to it. It’s not an easy job. It requires hardwork, so he has to really think about it before pursuing it.”

Cherry Pie is convinced that with her around, breaking into show biz would actually be more difficult for Nio. “I think the pressure is greater for him compared to other young celebrities. People’s expectations of him are high because they know that he’s my son,” she pointed out. “I want to make it clear, though, that there’s no way I will use my influence in order to make things easy for Nio. He has to learn on his own. He has to earn his spot through hardwork.”

Nio, on the other hand, said he was “determined to make a name for myself in this field. It’s so much better to be known because of your talents and capabilities rather than because you’re the son of your mom or your dad.”

When it comes to bashers, Cherry Pie said she has them, “believe it or not! I just don’t read the comments.” Nio agreed, adding that, “the best thing to do is to not mind them. Sometimes their goal is merely to send negative energy to you. Minding them won’t be healthy for you. So if it’s not constructive criticism, then it’s not worth the notice.” INQ

Read Next
Love Knots, June 8, 2021
EDITORS' PICK
Gilas out to prove Korea win not a fluke; Tab fires back at ‘lucky shot’ remark
Smart brings KCON:TACT especially 4U to subscribers from June 19 to 27
Smart celebrates all kinds of ‘#SimplyLove’ for Pride Month
SWS: Over 12M Filipinos still jobless as of May 2021
Brazil set to pass half a million COVID-19 deaths
WATCH: INQside Look with Fil-Am actress Aina Dumlao
MOST READ
Underdog Dasmariñas vows to fight to the death vs Inoue
Rajko Toroman praises, warns Gilas Pilipinas
Kai Sotto, Angelo Koaume lead Gilas roster anew for Korea rematch
The opposition’s dilemma
Don't miss out on the latest news and information.