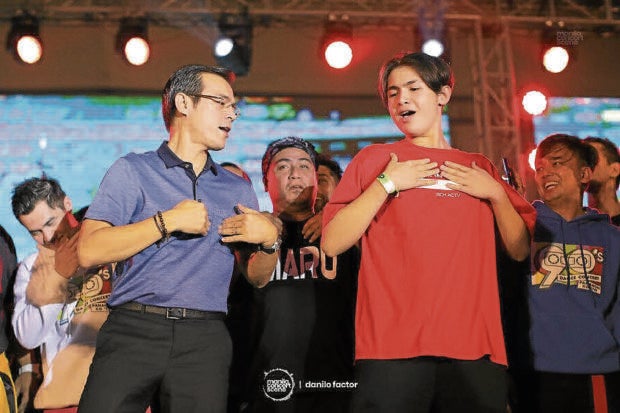 “If you want tomorrow to change, you’ve got to do something about it today.”

Thus said teen actor Joaquin Domagoso when Inquirer Entertainment asked him what important life lesson did his dad, former actor and incumbent Manila Mayor Isko Moreno (referred to as Yorme), share with him and his four siblings while growing up.

“If you keep doing the same thing today, then there won’t be anymore chance for you to achieve that change,” expounded Joaquin as he spoke with reporters during a recent media gathering for his film project, “Caught in the Act.”

Other people might find it hard to believe, but Joaquin said it’s not really “too difficult” to be a son of an overachiever father like Isko. “The only times I felt it’s ‘hard’ to be his son was when we’re out and I really wanted to go home already but I can’t because there are still people wanting to have their pictures taken with Papa,” Joaquin said, laughing. “Aside from that, everything about him and what he does is OK by me.”

Isko’s was a rags-to-riches story: It started with him working as a scavenger and pedicab driver at 10 years old. He became an actor at 19, and then a Manila City councilor at 24. He married Diana Lyn Ditan at age 26, and then won as vice mayor at 33. Now 46, he has been serving as mayor since 2019.As to whether Joaquin plans to take a career path similar to his dad’s—becoming an actor first and then later on, a public servant—Joaquin admitted that he doesn’t think much about that part of his future.

“Politics, that’s something you enter maybe when you’re 30 or later in life. Although my dad entered it very early, in his 20s, I plan to just focus on show biz. I’m not closing any doors, though,” the 19-year-old declared.

In terms of trying to step out of his father’s shadow, Joaquin said he tries not to focus on that, too. “If I do that then I will never be able to enjoy my time in show biz. His is a shadow that’s so hard to get out of. It’s gotten so big because he helped a lot of people. Come to think of it, why would I be afraid to be under that shadow?”

He further said: “People say we’re different because I’m coño, but I know I’m just being me. I’m coño, but friendly. People will just have to accept us for who we are. Daddy Wowie (Roxas, their talent manager) said that I got my being makulit from Papa. He is makulit but you still get to enjoy his company. I also don’t aim to make everybody happy because that’s impossible. I don’t try to live up to all the people’s high expectations, either. I just do me; and my dad is proud of that.”

Joaquin, on the other hand, said he has dreams and personal goals. “I think everyone should have them, because they help you push yourself to do better,” he pointed out. “In the future, I really want to do an action movie similar to ‘The Bagman.’ I like Arjo Atayde’s role there. Even though he is fair-skinned and an Inglisero, in the show, he was able to convince his audience that he’s an ordinary barber; and also a bad guy. You won’t see that, off-cam, he is actually rich; that he’s actually a sweet and loving person.” He added: “I want a role that will challenge me when it comes to action. I want to play a character that’s totally different from my real self, just like the one I will be portraying in this movie.”

In the crime-mystery comedy film “Caught in the Act,” Joaquin’s character becomes part of a group of senior high school students who invent a new mobile app that is supposed to help stop crime. The app enables onlookers to report a crime as they see it. While testing the app, they get to witness a crime committed by a syndicate group. The app effectively sends a report about this to the authorities. However, the first person to receive it is the head of the police, who is also involved with the syndicate. As the syndicate group tries to cover its tracks, these innocent teenagers now have to decide whether to run away as they are being hunted down, or face their tormentors head on.

“I’m not sure about how effective having an actual crime-solving app would be, because there’s a certain danger to letting civilians use it in the actual world sense. I’d be more careful with it if ever we’d eventually have a real, functioning one in the future,” Joaquin told Inquirer Entertainment when asked for his thoughts on the possibility of having an actual crime-solving app later on.

“Our characters are just regular teenagers, and with the technology they’ve developed, they can really get into trouble and maybe even die because of it. They don’t have the weapons and expertise to actually fight the villains. Apps like this still have to go through some form of government regulation,” he pointed out.

Asked which app he finds the most useful, Joaquin said, “it has got to be the Waze app. I can’t imagine going on road trips back when Waze was still inexistent. How can you possibly be able to get to different gimmick places or hangouts, or even shooting locations, without it?”

If he would develop his own app, Joaquin said it would be something that would help people locate clean public toilets. “I always have a hard time finding clean toilets when I want to do No. 2. This app will conveniently show everyone the location of all the clean restrooms in the area,” he said laughing.