‘Manoy’ for all seasons 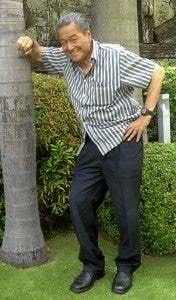 According to show biz lore, Eddie Garcia is irreversibly tight-lipped about his age, which thus assumed the preeminence of a state secret.

Actually, it took very little coaxing for the actor-director to make the big reveal. After all, he is an ageless wonder in the eyes of movie fans.

“In the 1980s, a reporter wrote a feature story that put my age at 10 years older,” he told the Inquirer.

He didn’t make a fuss; another actor, Ramon Revilla Sr., did. “Ramon said I should demand an erratum. He felt wronged because he is two years older than I am,” Garcia said.

Another urban legend about Garcia is his supposed daily intake of over a dozen nutritional supplements—said to be the secret of his vitality.

Garcia tackled this one with unusual candor: “After breakfast, I take about 20 supplements: vitamin A, B, C, D … Iron. One each … since I don’t like multivitamins.”

In the 1970s, Garcia, or Manoy as he is known in the biz, kept to a Spartan physical fitness regimen— and that was before it became all the rage.

These days, his pastime of choice is target shooting. “It’s good exercise,” he said. “It keeps me mentally alert and physically fit. I go to the firing range thrice a week and spend the entire day there, running and sweating.”

He added: “It teaches gun owners the safe handling of firearms. There’s a great sense of camaraderie among gun enthusiasts, too. The shooting community in the Philippines has over 3,000 members.”

He’s a competitive shooter, too, traveling across the country to join tournaments.

Before the movies beckoned, Garcia was a sergeant in the military police (MP) of the Philippine Scouts, which was under the US Army after World War II. 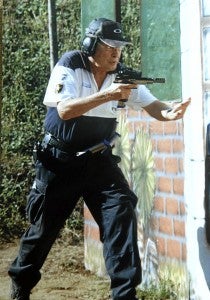 TARGET shooting keeps him active and alert, he says.

On his return to the country, he considered re-enlisting and flying back to Okinawa, but his friend George Sanderson had other plans. He showed Garcia a newspaper ad for a screen test. Actor-director Manuel Conde was looking for new stars for the swashbuckling costume flick “Siete Infantes de Lara.”

Garcia recalled that there were over 40 applicants and only seven, including him, got in. The other six were Sanderson, Johnny Monteiro, Albert Madison, Jaime Castellvi III, Terry Campillos and Mario Montenegro.

“We trained in fencing and stunts for three months,” Garcia recounted. “In the morning, we lifted weights and in the afternoon we had sword-fighting lessons.” That was in 1949. “Manuel’s son Jun was only 10 years old. As an adult, Jun (Urbano) became Mr. Shooli on TV and in the movies.”

The former Army man never dreamt of becoming an actor. “Everything was strange to me,” he said. “Our family and I used to live on Gilmore Street, near the studio of Sampaguita Pictures. One time, while I was on a month-long furlough, I caught the shooting of a movie starring Oscar Moreno, the father of Boots Anson-Roa.”

When he became a contract star of Sampaguita, he became the resident contravida. “I always played the guardia civil with the thin mustache,” he said. “That was because I spoke Spanish. My grandfather was a captain in the Spanish Army.”

He counts himself fortunate that, in his youth, he worked with the country’s finest directors, including two National Artists for Film, Conde and Eddie Romero. 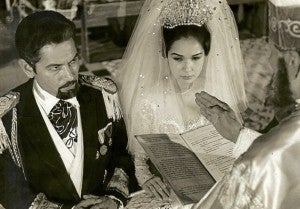 OFTEN cast as the evil Spaniard, he acted opposite Susan Roces in “Maruja.”

In an earlier interview with the Inquirer, Romero asserted that Garcia was a good example of an actor who improved in his craft

through sheer hard work and determination. “A good actor is born. There are a few exceptions. The one I am proudest of is Eddie,” said Romero of his namesake. “In the beginning, he was clumsy. But he refused to give up. Now, he is a fine actor.”

Garcia acknowledged that he learned a lot from Romero about filmmaking. Back then, Garcia said, Romero was already meticulous. “He knew exactly what he wanted to achieve. His background as scriptwriter helped a lot. He was a disciplinarian and was particular about punctuality, but was very cool on the set.”

His stint with Sampaguita instilled in him a strong work ethic, said Garcia. “Our producer, Dr. Jose Perez, and his wife Azucena were quite strict. They imposed fines on tardiness. Romeo Vasquez’s take-home pay would be almost down to zero because of the penalties.”

In his 12 years in Sampaguita, Garcia picked up precious pointers from other master directors like Octavio Silos, Nardo Vercudia, Armando Garces, Mar S. Torres and Olive La Torre (father of singer-actress Sylvia La Torre), among others.

Garcia admitted that working behind the camera entailed birthing pains. “Nanganay ako. But as a new actor, I had vowed that, in 15 years, I would direct.” He was ahead of schedule. “I 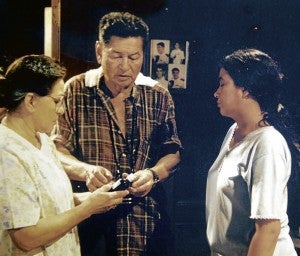 COACHING Nida Blanca (left) and Lorna Tolentino in the last film he directed, “Abakada ... Ina,” in 2001.

learned by hanging out in the studio. Nagbabad ako sa editing room. I consulted the directors and cinematographers,” he said.

In the mid-’60s, Garcia diversified, putting his military training to good use via a number of action films starring Tony Ferrer as secret agent X44 Tony Falcon.

“James Bond was very popular at the time,” Garcia related. “Tony’s brother, Atty. Espiridion Laxa, thought of a local version. I directed nine X44 movies, including  ‘Sabotage,’ ‘Modus Operandi’ and ‘Kontra Senyas.’” He wasn’t picky, he admitted. “I grabbed everything thrown my way.” 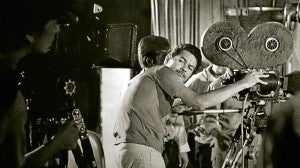 He has fond memories of shooting “Pinagbuklod ng Langit,” second bio-pic on the late President Ferdinand Marcos (after “Iginuhit ng Tadhana,” directed by Mar S. Torres, Conrado Conde and Jose de Villa).“My staff grew fat while making that movie,” he recalled with a hearty laugh. “Ninety percent of the film was shot in Malacañang Palace and the First Lady was always sending carts of sandwiches and juice drinks to the set.”

Depicting the lives of the rich and famous became his forte when he returned to directing in the 1980s, for Viva Films. “Producer Vic del Rosario and I created what we dubbed the Viva look—like a beautifully wrapped gift, even if the story is actually empty,” he admitted mischievously.

He explained that a lot of craft likewise went into these glossy dramas. He cited two scenes in the Vilma Santos tearjerker “Saan Nagtatago ang Pag-Ibig,” released in 1987: “Cinematographer Romy Vitug and I waited until late afternoon, when the columns at the back of the Manila Film Center formed long shadows. For another scene, we waited until dusk so the funeral procession would be reflected on a pond in the cemetery.”

“When I played these real-life personalities, I did lots of research. If my character was still alive, I would interview him. If not, I’d watch video footages,” he said.

Although his filmography is studded with commercial fare, most famously his “Manoy” movies, he doesn’t shy away from projects that are out-of-the-box.

He considers Lino Brocka’s “Tubog sa Ginto,” in which he played a family man hiding in the closet, as one of his favorites. “It was a meaty role. Other actors turned down the part,” he said. “They were worried about their macho image. I think it was the first time that the story of a gay man was tackled explicitly onscreen. My lover was played by Mario O’Hara, who later became a director himself.”

In 1978, Garcia depicted the struggles of a domestic helper in “Atsay” and, as director, guided Nora Aunor to her victory as best performer in the Metro Manila Film Festival. It was the first and last time that the best performer award was handed out in the MMFF.

He was a staunch supporter of independent filmmakers long before it became fashionable to do so. In 2000, he appeared in Raymond Red’s short film “Anino,” which won the Palme D’Or at the Cannes International Film Festival. “Raymond just called and asked me to work with him,” he recalled. Garcia’s only question was: “When do we shoot?”

In 2005, he played the lead role (a senior citizen coming to terms with his mortality) in Rica Arevalo’s “ICU Bed #7”—an entry in the first Cinemalaya Philippine Independent Film Festival—for which he won best actor. This year, he returns to Cinemalaya with Jun Lana’s “Bwakaw,” an entry in the Directors’ Showcase section.

He doesn’t mind the shoe-string budget in indie films, as long he plays an interesting and challenging role. In “Bwakaw,” he portrays an elderly dog lover with a deep secret. “It’s a complex character … the script (by Lana) is well-written. We spent 10 days, during Holy Week, in Quezon province to finish the film,” he said.

Lana looked back: “We shot non-stop. Near the end, people were collapsing. Not Tito Eddie. Dedicated and detailed, he is a director’s dream. He’s a hard worker like none I’ve ever seen.”

Roa, who acted with and was directed by Garcia in various films, described him as “an absolute professional, a dyed-in-the-wool artist and craftsman. He is the epitome of discipline and is compassion personified.”

Related fellow actor Madeleine Nicolas, who shared the screen with Garcia in Marilou Diaz-Abaya’s “Ikaw ang Pag-ibig”: “I was tasked to look after Tito Eddie on our set in Naga. For our trip back to Manila, we were supposed to meet at the hotel lobby at

Mike Tan, Garcia’s costar in the GMA 7 soap opera “Legacy,” concurred: “He would arrive on the set ahead of everyone, even the production assistants.”

Lovi Poe, another “Legacy” costar, also had nothing but praise: “I would see him intently reading his script. He’s a perfectionist, but flexible at the same time.” She said she was thrilled to work with Garcia,  who acted opposite her father, the late Action King and National Artist Fernando Poe Jr. in several films.

“FPJ was a complete professional,” Garcia said of Da King. “When he was directing, he refrained from drinking [alcohol]. He was totally focused.”

It didn’t come as a surprise that Garcia’s name cropped up, along with Dolphy, Joseph Estrada, Aunor and Santos, when talk of the need to declare a National Artist from the film community made the rounds.

“I don’t aspire for that,” he said. “If it comes, well and good. As I always say, awards are just a nice bonus for a job well done.”

He offered simple advice to today’s young actors: “Love your work. Come to the set prepared. Don’t give your directors headaches. And avoid chismis.”

Read Next
Tony DeZuñiga, comic book legend
EDITORS' PICK
Gilas out to prove Korea win not a fluke; Tab fires back at ‘lucky shot’ remark
Smart brings KCON:TACT especially 4U to subscribers from June 19 to 27
Smart celebrates all kinds of ‘#SimplyLove’ for Pride Month
SWS: Over 12M Filipinos still jobless as of May 2021
Brazil set to pass half a million COVID-19 deaths
WATCH: INQside Look with Fil-Am actress Aina Dumlao
MOST READ
The opposition’s dilemma
Minor’s death in Laguna drug raid prompts probe; 10 cops held
Underdog Dasmariñas vows to fight to the death vs Inoue
Chavit Singson joins Nationalist People’s Coalition
Don't miss out on the latest news and information.