Dave Bautista on his Filipino grandfather, living with regret and being around superheroes and zombies | Inquirer Entertainment
Close
menu
search 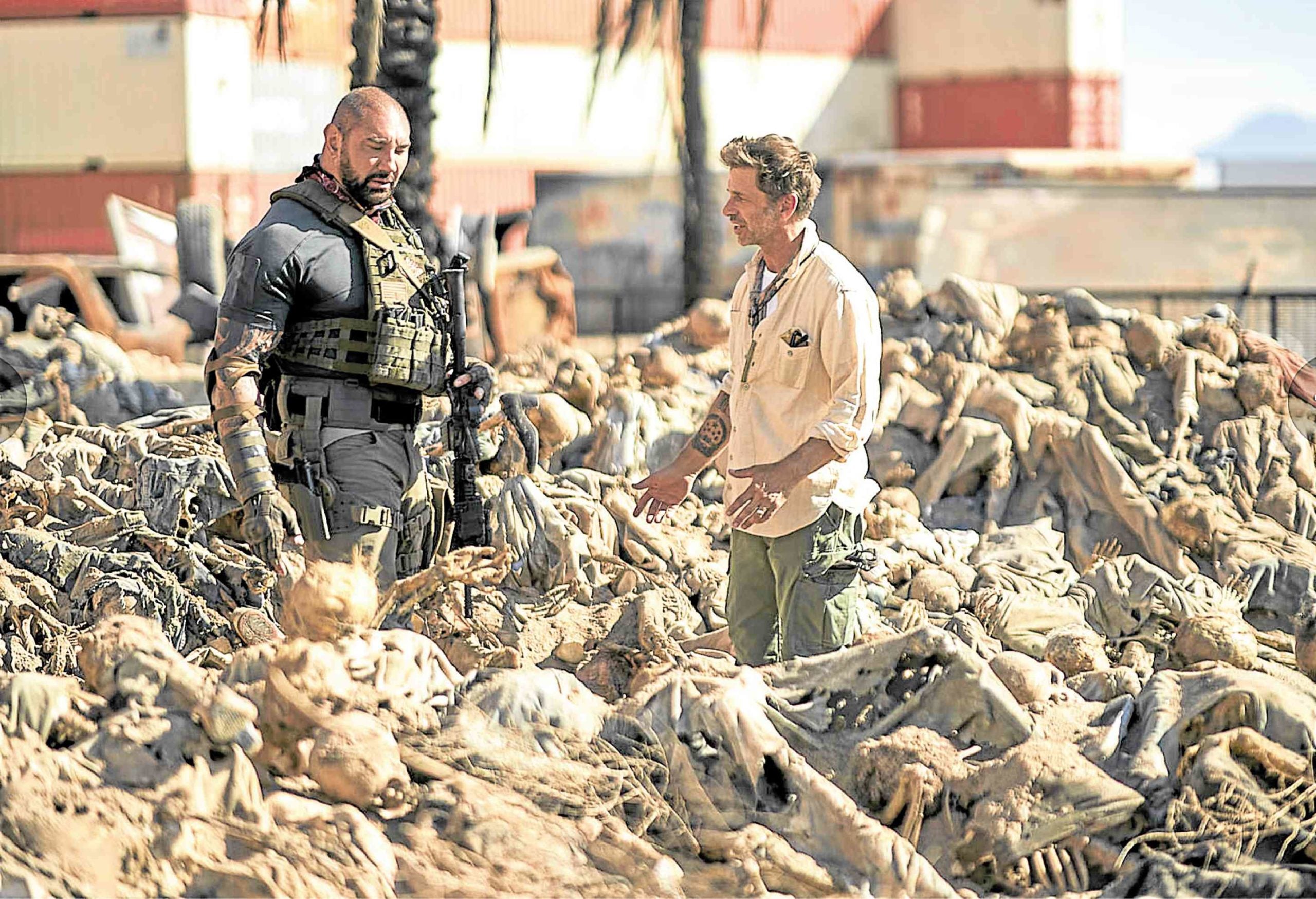 Even before booking the roles that thrust him into the A-list, Filipino-American actor Dave Bautista was already landing roles in high-profile titles that would make every actor-wannabe green with envy—from Sam Mendes’ James Bond flick “Spectre” to Denis Villeneuve’s “Blade Runner 2049.”

His participation in the upcoming “Dune” remake and “Knives Out” sequel are another source of bragging rights for Dave.But the 52-year-old wresting superstar-turned-actor, who’s best known for playing Drax the Destroyer in the “Guardians of the Galaxy” and “Avengers” films, is marking a career milestone as an actor on Friday.

With the release of “Army of the Dead,” Dave is stepping up to solo leading man status by way of Zack Snyder’s second foray into the zombie genre (after 2004’s “Dawn of the Dead”), which will be launched on Netflix.

The film takes place after a zombie outbreak that leaves Las Vegas walled off from the rest of the world. It reminds us of two things: First, it brings to mind Yeon Sang-ho’s 2020 “Train to Busan” sequel “Peninsula,” where a whole country is segregated from the rest of humanity because of its inability to contain a virus outbreak.

Second, it makes us mull over the sorry state of the Philippines, while the rest of the world is starting to reopen their borders and economies after hurdling the calamitous repercussions of the coronavirus. It’s a scenario that could happen to us if the government continues to pretend that its inept pandemic response is “excellent.”

In the film, former zombie war hero Scott Ward (Dave) seizes the opportunity to “reconnect” with his estranged daughter Kate (Ella Purnell) when he is tasked by casino boss Bly Tanaka (Hiroyuki Sanada) to put together a ragtag mix of mercenaries and nerds to break into the zombie-infested quarantine zone.

In “Dawn of the Dead,” the undead are called “twitchers,” while in “Army,” they’re referred to as “shamblers.” But even scarier than the shamblers are the highly evolved alpha zombies that punch like MMA fighters when they aren’t feasting on human flesh.

Their leader rides a horse like a seasoned equestrian—with a similarly ravenous zombie pet tiger in tow! If that doesn’t give you the heebie-jeebies, how about this blood-sucking bunch’s ability to reproduce baby zombies? Yikes! The group’s mission: Retrieve $200 million sitting in a vault beneath the Vegas strip before the whole city is nuked to smithereens in four days’ time!

Like Zack’s zombies, Dave is setting his sights on thespic reinvention in “Army.”

“The most challenging thing for me were the film’s emotional scenes,” Dave told us, along with a small group of Filipino journalists. “Sometimes, it’s a challenge for me to deliver lines to a large cast because I’m typically a soft-spoken person—I’m not very vocal.

“So, when I have to be the man in-charge, it feels unnatural to me. It takes me out of my comfort zone. It’s simple things like that that you’d never think of that are the biggest challenges for me. The physical stuff has always been easier for me, which was why I was able to transition into professional wrestling and come into my own. “But once I’m supposed to pick up a microphone to speak to people, that’s where my struggle comes in—and you’d see me being self-conscious and insecure because, believe it or not, I’ve always been an introverted person.

“I find the intimate moments that require me to act challenging—which is what I love about this role. Scott isn’t exactly who I thought he was going to be. He isn’t that predictable, generic action hero. I feel challenged by acting on that level, because it’s new to me. I can’t wait for my next project because I want to become a better actor.”

After telling him how proud we were of what he has accomplished, we told Dave how envious we were of his “cool jobs,” which require him to either hang out with Marvel Cinematic Universe’s superheroes or spar with zombies. Which was a more fun experience for him?

“Oh, [it’s more fun being around] zombies (laughs)!” the actor said, chuckling. “Yeah, I’m a zombie fan. You know, being in those Marvel films and hanging out with my friends in ‘Guardians of the Galaxy’ or the actors from ‘Avengers’—it’s great! I’m a fanboy. I love being in that atmosphere and being included in that conversation!

“But to be around a bunch of zombies, who are just flipping and flying all over the place—I mean, I’m a big kid, and there’s nothing better than that (laughs)! These are moments that I can’t do anywhere else! This is what keeps me young. “What was even more fun were the days when we were shooting big action scenes. So, in between takes, I would do like martial arts with some of the athletes made up as zombies. Who’d ever thought I could do breakdancing or jiujitsu with a zombie (laughs)!”

As a wrestler, Dave may have found his place in the sun in a world that thrives on bravado, but his answers to our questions are always the thoughtful and contemplative sort.

We were swept off our feet even more when he admitted that he was living with regret for not trying to know more about his homegrown war-vet grandfather when he had a chance. Still waters run deep, indeed. 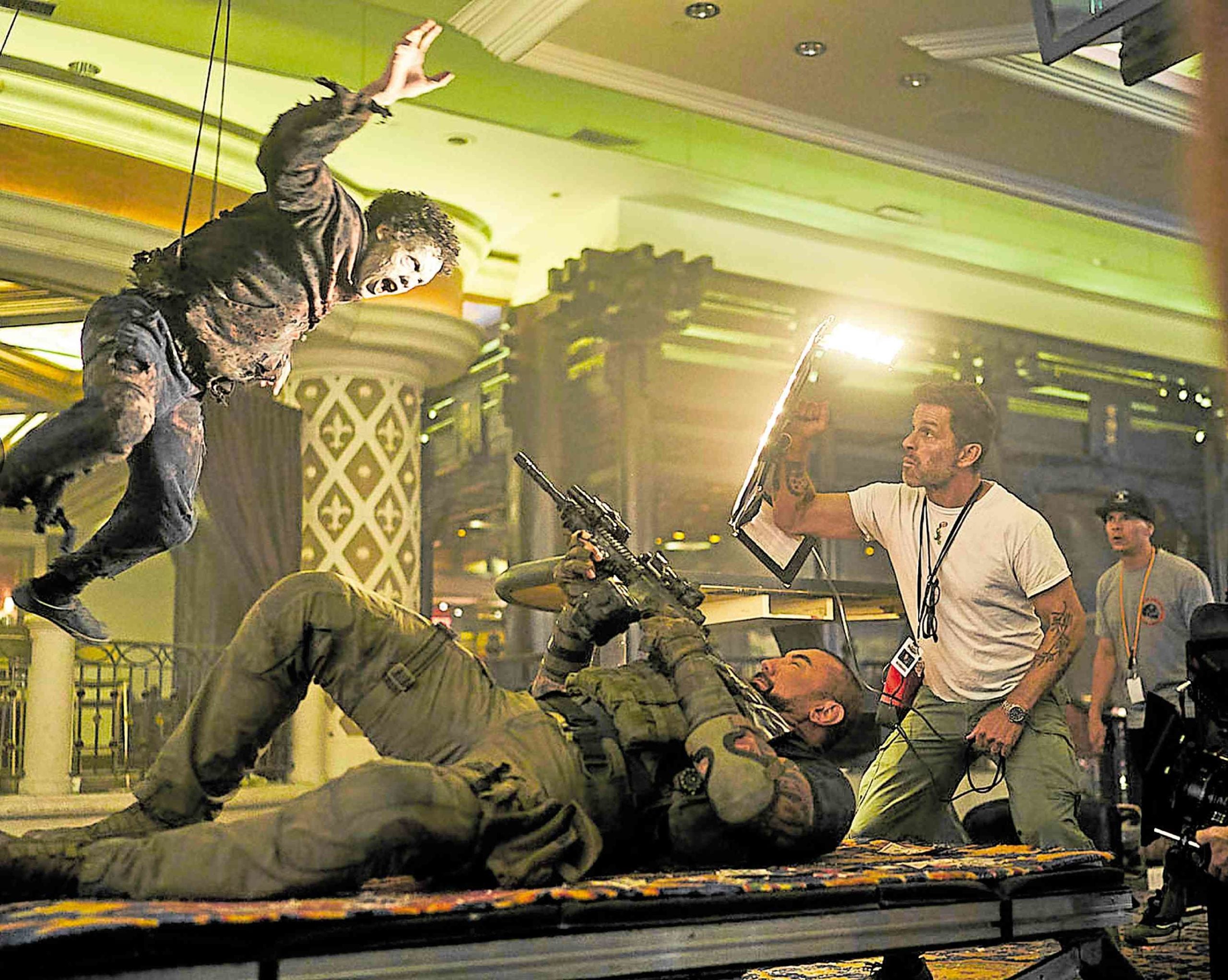 Bautista (center) and Snyder (right) shooting a scene with a zombie

More from our Q&A with Dave:

Could you share what you know about your grandfather, who was reportedly a war veteran in the Philippines?

His name is Alfonso Bautista. I lost my grandfather when I was 18. It’s weird because I began reflecting [on my relationship with him] as I got older. You know, when you’re younger, you don’t think about having those conversations with your grandfather because all you see is right there in front of you. So, the things that we talked about was food. I always wanted to take him to McDonald’s.

He was a barber as I was growing up, so I grew up in his barber chair. But at the time, I didn’t have an interest in his background as a soldier. I knew that he was wounded because of it … and I saw the scars. But I never asked him how he got them.

Now that I’m older, I live with regret for finding out more about his childhood, where he was from, about my relatives, his upbringing and his time in the military.

I’ve heard from multiple sources that when my grandfather first came to the United States, he was in San Francisco first—and he was super wild as hell. Like, he’d run in the streets like he was a terror!

I would have liked to know more about that side of my grandfather, and I wish I did because it all sounds so interesting. I tried to find out from different family members, but a lot of them who were the same age or grew up with my grandfather are long gone. It’s one regret that’s hard to live with sometimes.

Your character is as badass as he is gentle, especially in his quiet moments with his daughter Ella. How did you see yourself in Scott?

It wasn’t always easy. I don’t have a theatrical background and didn’t spend years in drama school, so I draw a lot of my acting from experiences—so sometimes, the experience is a little painful for me.

It’s something that isn’t expected of a guy with my frame and stature. Some people would look at my physicality and would never see me as an emotional person—which I am, absolutely. I’m very loving and emotional. I’m so Filipino.

I want to continue expressing that side of me because I don’t want to be a stereotypical action hero. I want to be somebody who has a heart because I want people to be able to relate to me and empathize with me. Sometimes, it’s hard to do that when you’re a large, muscular person. But I’m learning.

Your character often talks about regret. Do you have a lot of regrets?

There are things that bother me when I think about mistakes that I’ve made in my life. But every mistake I’ve made has made me a better person.

Sure, there are things that I would change—especially those that affected other people. But I’ve come a long way, and I’m pretty content with my life. I’ve been able to provide for the people in my family, who I love dearly.

So yeah, I do live with some regret, but I wouldn’t change that because my mistakes made me who I am today.