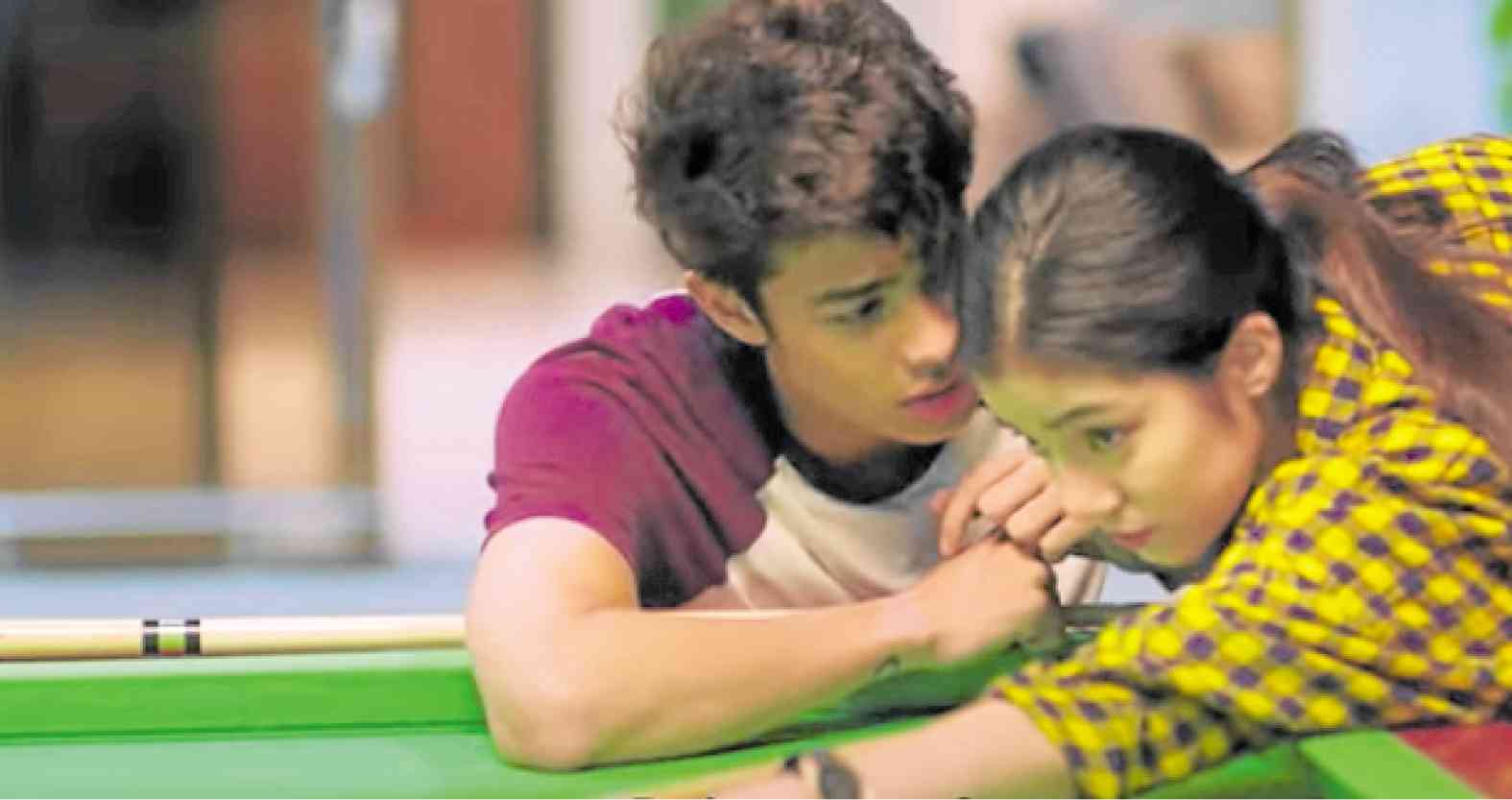 Donny Pangilinan (left) and Belle Mariano in “He’s Into Her”

With the huge height difference between Donny Pangilinan and current onscreen partner Belle Mariano, “He’s Into Her” director Chad Vidanes admitted that they had to make use of apple boxes on the set whenever he needed to get a close-up shot of the two.

Donny is a six-footer while Belle measures only five-foot-two. They are collectively known as DonBelle.

“Making people feel kilig for our characters was easy. What was hard was looking up at Donny all the time. My neck would hurt a lot,” Belle said, laughing.

“I think the pairing is quite effective. Maxpein (Belle’s character) may be short but she is strong and feisty. As you have seen in the trailer, she hit Deib (Donny) in the face. It’s really interesting to see someone like her stand up to a tall bully like Deib,” Donny told reporters during a recent media conference to announce the release of “He’s Into Her,” a youth-oriented romantic comedy series that will start streaming on iWantTFC on May 28.

“There’s no problem with the wide shots, but with the close-ups, we really had to utilize apple boxes just so Belle would be able to get into the frame alongside with Donny,” explained Chad. “It didn’t affect the quality of work of the two leads, though. I can testify to that. Despite the height difference, there were a lot of Take One scenes. When they began staring into each other’s eyes, tapos na ang usapan.”

Donny said he and Belle would often discuss a scene before the take. “Our emotions have to be as natural as possible for the scene to be effective. You have to really be able to feel it,” pointed out Belle, adding that aside from this, they also attended several workshops, team-building sessions and one-on-one acting classes.

When asked what his first impression of Belle was and what he eventually discovered about her when they were finally working on the set, Donny replied: “I thought she was the shy type. You have to give her time to come out of her shell. I saw more of that side of Belle when we finally got into our lock-in set,” recalled Donny. “At first, there was awkwardness because we only had small projects together before and weren’t really close. Through time, I saw that she’s also energetic, that there’s a side to her that’s very outgoing and easy to work with.”

Belle, meanwhile, admitted she felt apprehensive about approaching Donny in the beginning. “I was afraid he would just ignore me. I realized later that he’s very approachable and is actually super nice,” the actress said. “During the shoot, I learned that, like me, it also takes time for him to open up to people he doesn’t know.”

Donny added that he is very excited that the series will finally be released. “This pandemic has made me realize a lot of things. One of them is that I miss working, I miss being on set. I’m just so happy that this show, which has been in the works for quite some time, is finally airing,” he pointed out. “In terms of being scared, yes I am. It’s because we still don’t know how the audience will react to the show. There is also that pressure to reach the expectations of people who have read the book.”

The series is based on the popular Precious Pages-LIB novel of the same title by Filipino author Maxinejiji. “Overall, the pressure is more of a good thing. At the end of the day, we always want to give something that would really inspire people and make them go through a roller coaster of emotions. I believe this is one.”

“He’s Into Her” is the story of Maxpein (Belle), who agrees to live in Manila, upon the request of her father. She ends up studying at the prestigious Benison International School. As she tries to fit in, she also clashes with Mr. Popular, Deib Lohr (Donny). Her life soon turns upside down when Deib decides to get their entire batch to prank and bully Max. But as he does this, Deib realizes that in crushing Max’s spirit, he is also slowly falling for her.

Belle described playing Max as “very challenging.” She explained: “Unlike her, I’m girly and super kikay. Although it’s important to note that we’re both family-oriented and honest to ourselves.”

Donny, however, refused to give a detailed answer, lest he would spoil the film for the audience. “He is a bully, but he also has qualities that other people don’t see. I just want to say that there’s this other side to Deib that I could relate to,” he said.

So is Donny now very much “into” Belle?

“I would say that Belle and I get along a lot,” Donny declared. “In the beginning, it was hard to find that emotion that shows me already falling in love with Max. We eventually reached that point when our walls were broken down already, when we opened up even more. What I like about Belle is that she’s very easy to work with. I observe her and I should say ang galing niya! From the very beginning, I believed in her. I even told people who doubted her that Belle is very capable of playing Max.”

Asked how much they have grown emotionally since the time they began the project, Donny jokingly said: “About five inches! Seriously, a year of not leaving your home because of the pandemic really forces you to try new things and think about life. I’ve gotten closer to my family—we actually fought more. I also tried a lot of new things, studied more, worked out more. I became more focused and more efficient in time management.”

Belle agreed with Donny by saying: “We were all stuck in our homes and this actually forced us to grow. Working in the new normal has taught me to become more independent since I was on my own most of the time, or just with my personal assistant, and my family is away. These days, I have developed a deeper understanding of my craft.”

As to their “take-away” on love from being Deib and Max, Donny said: “The biggest one would have to be that love can happen unexpectedly, and with people you least expect to fall for.”

Belle added: “You first need to be honest with yourself and to love yourself first before you become capable of truly loving another person.”

Joining Belle and Donny are Jeremiah Lisbo, Vivoree Esclito, Kaori Oinuma, Rhys Eugenio, Joao Constancia, Criza Taa, Ashley del Mundo, and Gello Marquez. “He’s Into Her” streams on iWantTFC on May 28, two days ahead of its premiere on May 30 (Sunday) on the Kapamilya Channel, A2Z and on Kapamilya Online Live.