An eye on Paoay 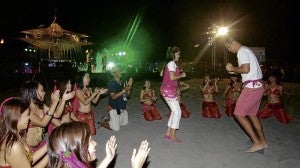 PAOAY, Ilocos Norte—“She deserved to be recognized for what she did in the film. She was perfect, the model professional actress,” recalled Ilocos Norte Gov. Imee Marcos of actress Nora Aunor who worked here on “Himala” in 1982.

Directed by Ishmael Bernal, who would be national artist for film, the critically acclaimed drama was shot entirely in this province, showcasing the desert-like landscape. Marcos bankrolled “Himala” as head of Experimental Cinema of the Philippines.

“I suggested that they film here. I held them hostage [for three weeks]. Nora was so cooperative. She would be up at 8 a.m. There was nothing to do here at night, anyway,” Marcos told the Inquirer.

She said Aunor even figured in an accident that broke her arm. “Nagdusa talaga siya. We had a hard time, especially with the crowd scenes. I remember Joel Lamangan was our crowd director, his first job after getting out of prison. The great Ishma (Bernal) was crazy!”

Sadly, Aunor failed to attend “Himala sa Buhangin,” a music and arts festival held here on May 10. It was the highlight of a weeklong celebration of the feast of the La Virgen Milagrosa of Badoc town.

Marcos said Aunor wasn’t feeling well, but added that the event was just the start of a huge project. “We’re experimenting on what to do with the sand dunes. Farmers used to think this 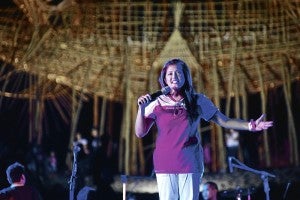 place was cursed, but it’s now becoming the place for sports, recreation and, lately, of art. For some reason, artists get inspired, maybe because it’s so strange-looking, so alien to us.”

Some 5,000 rock music fans went to see Wolfgang, Up Dharma Down, and local bands Power Popcorn, Hidden Nikki, Clip Walk Circus and Better Than Noise that night. The fest was held to help promote the province’s “Paoay Kumakaway” tourism campaign.

“Himala” wasn’t the only movie shot in the province, Marcos pointed out. She proudly noted that Ilocos Norte stood for Vietnam and Mexico in Oliver Stone’s “Born on the Fourth of July” (1989). The Australian action flick “Mad Max” (1979) was also filmed here, as well as Roger Corman and Cirio H. Santiago’s “Stryker” (1983).

“It’s a big deal for us when we become the stand-in for other places. It’s the kind of advertising that we can’t afford as a province anyway,” Marcos said.

She has thought up incentives to encourage more producers to shoot their films in the province. “The provincial government hasn’t formalized it, but it has begun operating as locations manager for anyone who wants to shoot a film or TV commercial here. We basically try to help look for accommodations or even sponsors for low-budget indie movies. We match every peso spent here with at least 50 percent.” 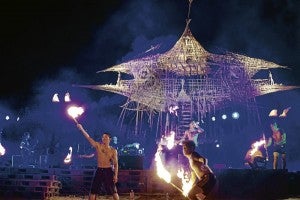 FIRE dancers start the burning of art installations during the festival. Photo by Alaric Yanos, contributor

Marcos said tourists started pouring in after the ABS-CBN drama series “Walang Hanggan” featured the windmills of Bangui and the Cape Bojeador lighthouse in Burgos in some episodes. “I blame that show for the influx of people,” quipped Marcos. “The northern leg of Ilocos Norte wasn’t quite ready yet. It didn’t have enough hotels and ATMs; roadways were still unfinished. Dinagsa kami ng tao. But that’s a happy problem.”