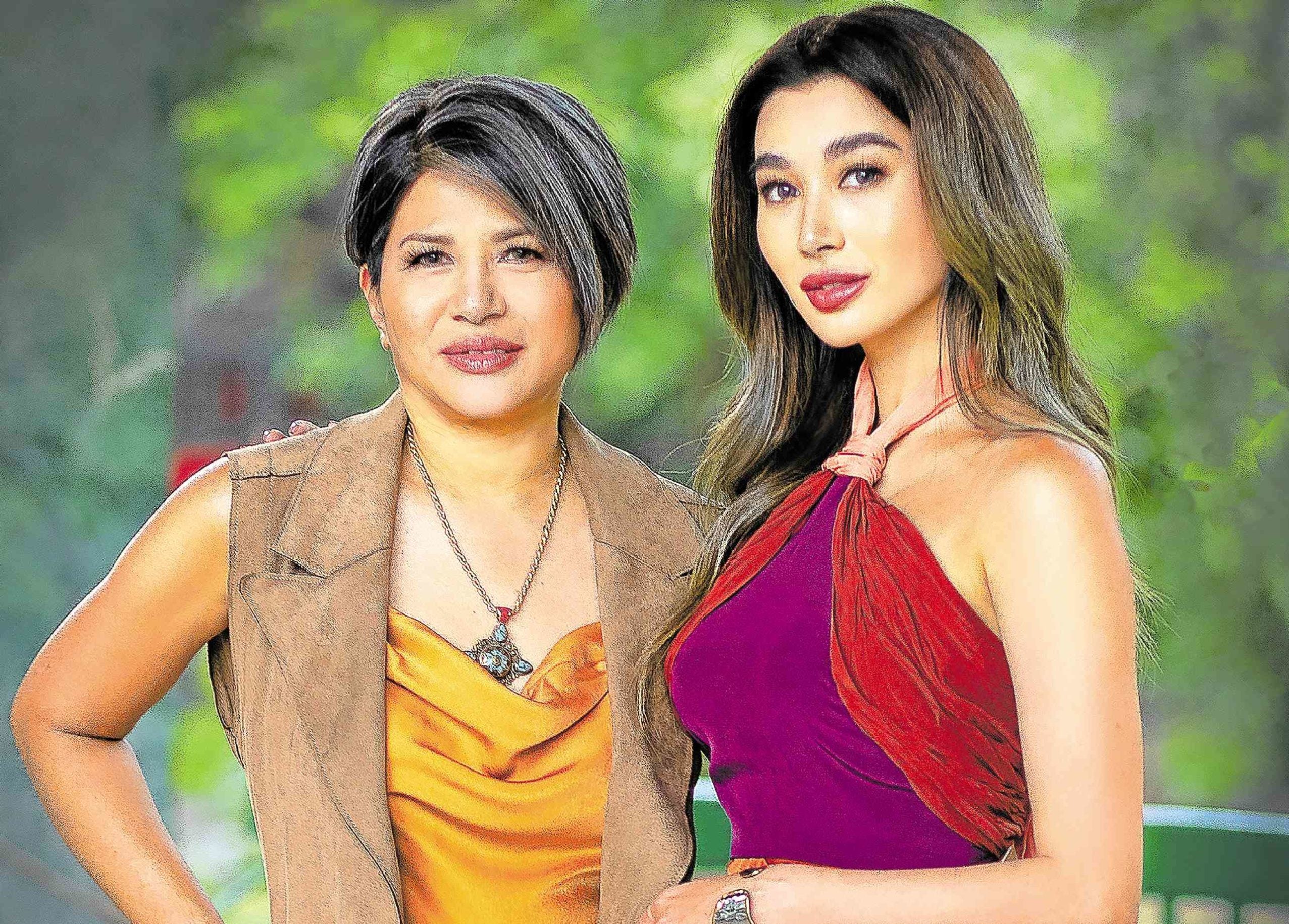 OPM aficionados have something to look forward to when the clock strikes midnight tonight, just in time for Mother’s Day.

And it’ll be doubly special for anybody who grew up listening to the enduring tunes featured in the soundtrack of Jeric Soriano’s youth-oriented 1984 movie musical “Hotshots,” which starred Aga Muhlach, Raymond Lauchengco and Gary Valenciano.

Of course, Gary V’s “Reaching Out” and Raymond’s “Shadow of Time” immediately come to mind. But after 37 years, the album’s “other” unforgettable ballad—Cecile Azarcon’s “Special Memory”—will be revived by the original interpreter herself, the lovely-as-ever Iwi Laurel. However, it’s a “cover” that comes with a cleverly imagined Mother’s Day twist. This time, Iwi will sing it with her talented daughter Nicole Laurel Asensio, who has of late been making her presence felt as a genre-scaling performer.

Here’s a trivia: On the day Iwi recorded the original version of “Special Memory,” the studio sent her the demo tape at 11 a.m., and she finished recording the song at 1 p.m.—after a single take! How prodigious can you get? As icing on an already scrumptious cake, the new version, released by Warner Music Philippines, will be jointly arranged by Nikko Rivera and the song’s original arranger, Homer Flores.

In a two-on-one interview over Zoom last Wednesday, Iwi explained why she welcomed the idea of “reintroducing” her signature hit to a new generation of music lovers.

“Well, it’s been remade twice or three times already, before Nicole thought about this,” Iwi said. “But I thought, ‘If this was going to be revived, then it had to be Nicole’—because she’s my daughter (laughs)—and because I originated the song, thanks to Cecile Azarcon, who wrote it. So, I’m excited—no, thrilled—to hear the outcome! Remember, this was written in an era when synthesizers were new, so how do you top that?”

After her forays into musical theater (“Annie,” “The Magic Staff” and, later, “Rent” ) and on the local band scene (Crowjane, General Luna), Nicole didn’t want to rest on her laurels. Instead, she embarked on a solo career, galvanizing music lovers with the rock-and-theater vibe of her continually emerging artistry by way of the 2015 album, “Schizoprano.”

Aside from singles like “Love Me or Don’t” and “See Through” (her collaboration with Grammy-nominated US producer Blue Hamilton), Nicole has even created her “kwela” alter ego, Tita Flores, that has been generating a lot of crowd-pleasing traction on social media—a fictional laugh-out-loud socialite character that is making her even more accessible to the masa.

Her self-penned originals hew close to the mishmash of sounds that suits her voice to a T. But the challenge of interpreting her mom’s OPM hit was a task she was both scared and excited to embark on.

“Trust me, I was so nervous to touch this song,” Nicole admitted when we asked her how she came up with the decision to finally record her version of it. “The other songs kasi, I wrote most of them, so OK lang if I made a mistake! But I grew up around ‘Special Memory,’ and as my mom’s daughter, whenever I would bump into someone who knew her, they’d be like, ‘Sige nga. Can you sing your mom’s song?’

“And I never tried! I would just clam up because that song is a monumental piece in OPM and my style is very different. I was scared to do a song that was so well-remembered.

“But it was two Mother’s Days ago, before the pandemic started, that I decided it was as good a time as any to remake the song because, back then, it was the 35th anniversary of ‘Special Memory.’ Sabi ko, it’s now or never … kaysa naman I’ll wait till the 45th year (laughs)!”

Does Iwi give Nicole feedback about her voice and singing style?

“When I was younger, my mom would give me helpful feedback. I used to do a lot of things with my voice that were not good for it. But it was her, Tito Cocoy and my grandma Fides who would make sure that the foundation is there. They made sure that I would be able to preserve my voice when needed.

“These days, not a lot of people know that my mom and I share playlists on Spotify, so we get to listen to each other’s music choices. So, people will hear a nice combination of flavors for this particular remake.”

But, as they say, the apple doesn’t fall far from the tree.

“Our voices are really quite similar,” Iwi said when asked how different her voice is from Nicole’s. “Sometimes, when we do a duet, you can’t tell who’s who—and, when we lip sync, we get confused—because we sound so much alike (laughs).

“But Nic has a very rich and deeper timber—mas hollow for her age. And I sound like her younger version! My voice isn’t as big, but I can belt. But when she belts, wow, it’s effortless for her. So, I have to go through a muscle memory kind of thing, whreas she just floats through all the notes easily.”

How has Iwi’s voice changed since she recorded “Special Memory” in 1983?

“It’s very different,” Iwi admitted, laughing. “I was only 19 then, so my voice was very young and todo vibrato—I had no straight tones in those days, because of my background in theater (“You’re a Good Man, Charlie Brown,” “Sweeney Todd,” “Fiddler on the Roof” for Rep). In terms of singing styles, we didn’t have any—we were just floating through the melodies that we hear in our heads when we wanted to interpret a song. There was no styling.

“Later on, we developed our own styles. You learn that it sounds good when you have space from the vibrato sometimes … when you’re delivering the notes. So, the thickness of the quality of my voice came in after Nicole was born… I guess it’s the body. The muscles get thicker, which changes the texture of the voice, it becomes lower and more hollow.

“Then, I joined the ‘80s band Overdrive for a hobby. They started making me sing all the male songs that were leaning towards rock—like those by the Pretenders and all that. So, my voice kind of changed and I stopped sounding like how I did when I was 19 when I did ‘Special Memory.’ So, I stopped singing it! That’s why, for the longest time, I never really promoted ‘Special Memory’! They just kept playing it on the radio all the time—it was insane (laughs)!

All this exhilarating display of artistry doesn’t really come as a surprise to us. In fact, we’ve actually worked with Iwi and Nicole years before we “officially” began directing theater plays and musicals for New Voice.

In the late ‘90s or early 2000s, we were “called in” by the Laurels, who were close to Tita Terry Wilson, Monique’s much-missed mom, to help Cocoy direct a special version of “The King and I” for the clan’s reunion at Mania Polo Club. All roles would be portrayed by members of the family.

Of course, we were initially intimidated by the prospect of directing Tito Doy as the King of Siam and Tita Celia as Anna Leonowens. But it didn’t take long before we realized what a fun, kind and down-to-Earth bunch the Laurels were. Cocoy was the over-all director, and Iwi was tasked to play Tup Tim.

What we didn’t expect was how we would end up becoming an “adopted Laurel” by accident—because a week before the show, a crucial member of the cast had to beg off from performing!

And guess who was “promoted” to play Lun Tha opposite Iwi and sing the classic show tune “I Have Dreamed”? Yes, we wore Lun Tha’s gorgeous, Broadway-quality costume prepared by Tita Celia herself!

So, we held our breath, sang as earnestly as we could and held our head high. After all, it isn’t every day that one gets to become a Laurel—even for just an hour or so.