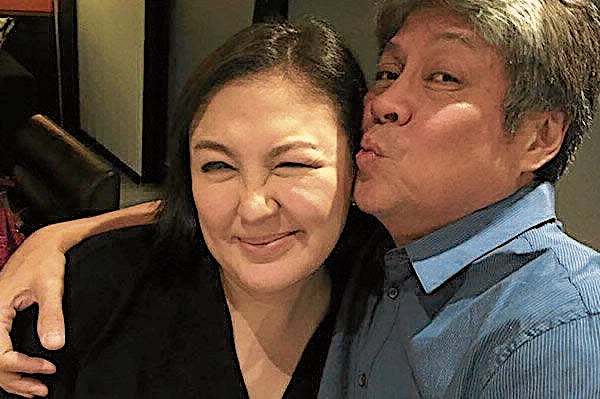 Marriage is no guarantee for a “happy-ever-after.” Sometimes, it turns into a “never after.” Staying married is quite a feat, especially for celebrity couples. When you’re in the limelight, it feels like you are married to the public, as well.

So, Sharon Cuneta and Kiko Pangilinan have all the reasons to celebrate their silver anniversary (on April 28). After 25 years, four kids and countless fur babies, they still manage to be each other’s “home” and “adventure.”

Here’s my chat with Kiko:

How do you and Sha keep the fire burning?

Marriage between two imperfect human beings, in order to endure, ought to be God-centered—a lifelong commitment and never-ending effort at courtship, wooing, understanding, forgiveness, sacrifice, faithfulness, lots of laughter, fun times and a healthy respect for one another.

What’s the “craziest” thing you and Sha have done as a couple?

We aren’t really into doing “crazy” things. Given the pressure-cooker environment we both face in our professional lives, at home, we prefer the quiet, laid-back, stress-free setting and slow pace. Some may even think it’s boring, but when one is faced with tons of daily pressure at work, boring is the new exciting.

How do you and Sha handle misunderstandings?

We have our spiritual advisers, a few pastors and close family relations we run to for advice and guidance. Sharon and I are also prayerful. We give each other space for prayer and reflection during a misunderstanding. After all that, and as a means of making amends, I woo her back with her favorite food (laughs), beautiful flowers and carefully written love notes. And we set aside our differences—with me having the last say … ‘Yes, dear!’

How do you handle it when Sha gets emotional about KC, like her recent vid of their FaceTime convo?

I let her be, but I make sure she knows I will always be there for her and the children. I allow her the space she needs to express her emotions, and if she needs me to provide her the emotional and spiritual support, she can count on me.

If your love story with Sharon would be made into a movie, what will the title be?

The entire showbiz industry mourns the loss of an icon and pillar, our beloved Tito Ricky Lo. I will never forget the time he came to my rescue when I was embroiled in a controversy back in the ’90s. He devoted his entire column to print the “proof” (a handwritten letter) that I was telling the truth.

Kindness was in everything Tito Ricky did. No actor/singer became famous without his help. Long before there was social media, YouTube and Tiktok, the surefire way to become famous was by being featured in Funfare, Ricky’s widely read column in Philippine Star.

My fondest memory of him was when we had an online show together with our colleagues, Isah Red and Shirley Pizarro called “My Foursome” on PLDTMyDSL in 2009. It was so much fun cohosting with Tito Ricky, Isah and Shirley, so it did not seem like work at all.

The last time I saw Ricky, he was prodding me to write a book about my “colorful past.” He told me, “It should be a tell-all, but don’t name names, so it will be intriguing The title would be ‘To All the Men I Used to Love’—and I will write the intro.” Tito Ricky, we showbiz folk cannot thank you enough for everything you tirelessly did for the entertainment industry. You left a void and column space that nobody else can fill. As we send you off to heaven, Mr. Funfare, you deserve the grandest fanfare ever for a job well done and for being so well-loved.

Beauty’s advice to Derek about her BFF Ellen