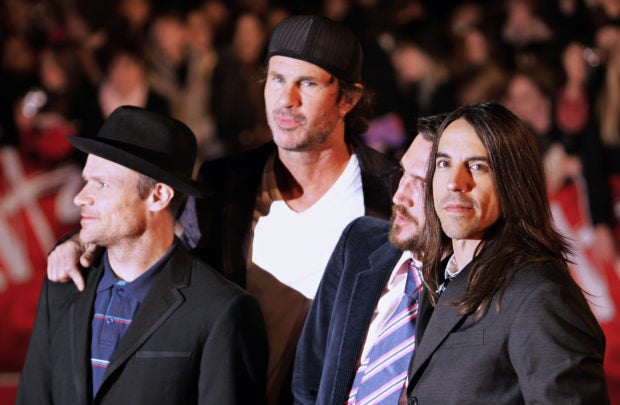 The Red Hot Chili Peppers are the latest high-profile act to sell their music publishing rights, in a deal reportedly worth $140 million to $150 million struck with the British investment firm Hipgnosis.

Industry tracker Billboard cited anonymous sources in first reporting the sale of the catalog that includes hits like “Under The Bridge,” “Californication” and “Snow (Hey Oh).”

Neither Hipgnosis nor the band’s representatives immediately responded on Tuesday to AFP requests for comment.

As most of the songs were written collectively by band members Flea, Anthony Kiedis, John Frusciante and Chad Smith, the purchase required joint approval.

According to Billboard, Hipgnosis sold nine million new ordinary shares at $1.66 per share on April 29 to finance the deal, which brought in $14 million.

The company headed by music magnate Merck Mercuriadis debuted on the London Stock Exchange in July 2018, and has dropped well over $1 billion on catalog acquisitions including from Neil Young, Blondie, Shakire and RZA.

The latest sale is part of a song rights purchasing boom as financial markets increasingly are drawn to the lucrative portfolios as an asset class.

In many cases, the transactions have come at staggering prices.

Bob Dylan sold his full publishing catalog for a reported sum of $300 million to Universal Music Publishing Group, while Stevie Nicks of Fleetwood Mac sold a majority stake in her catalog reportedly for $100 million.

The owners of a song’s publishing rights receive a cut in a number of scenarios, including radio play and streaming, album sales, and use in advertising and movies.

The sales allow artist to receive immediate payouts rather than wait for those earnings, necessary for some as the pandemic has thwarted performances. JB