The ballad of Lilia Cuntapay 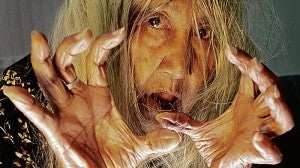 THE MOST famous Pinay aswang. photo by RAFFY LERMA

The mockumentary “Six Degrees of Separation from Lilia Cuntapay” was well-received at the Far Eastern Film Festival in Udine, Italy, said its director, Antoinette Jadaone, who attended the seven-day event with lead actress Lilia Cuntapay.

“The audience applauded clapped as soon as the closing credits rolled … it was overwhelming. Nanay Lilia kept waving and blowing kisses to them,” Jadaone told Inquirer.

“Six Degrees” is about a veteran bit player nominated for an acting award for the first time in her 30-year career.

It won for Cuntapay and Geraldine Villamin the best actress and best supporting actress awards, respectively, at the Cinema One Originals Digital Film Festival, where the movie debuted in November 2011.

“In Udine, for a 3 p.m. screening on a weekday, a lot of people watched. They were mostly college students, since the venue was near a university,” related Jadaone. “After the screening, there was a long line of people who wanted to have snapshots with Nanay Lilia. Some asked for my autograph, too.”

A big press conference followed. “Reporters of different nationalities turned up,” said the director. “We were given headsets for translations. They were curious about how close the

DAYS OF WINE and pearls for Lilia Cuntapay, hailed as a star during the Udine Film Festival. PHOTO FROM LILIA CUNTAPAY’S FACEBOOK PAGE

story was to real life. They also asked how we got Mercedes Cabral to play a cameo. Apparently, she’s a big star in Italy, like director Joyce Bernal, whom they all love because of the movie ‘Agent X44.’” Bernal was creative consultant for “Six Degrees.”

“Six Degrees” will be screened at the 2012 Pusan International Film Festival in South Korea in October.

Prior to the Udine fest, Jadaone, Cuntapay and Villamin, line producer/production manager Daphne Chiu and music composer Ayn Marie Dimaya chatted with us after a special screening of “Six Degrees” at the Inquirer offices in Makati City.

Did you really shoot at Lilia’s house?

What were the challenges of shooting there?

How long is your hair exactly? 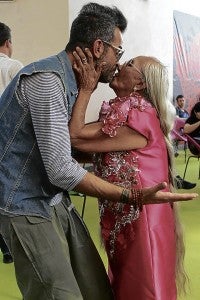 KISS ON HER LIST With Max Mestroni, a “life prospect partner,” she says. PHOTO FROM LILIA CUNTAPAY’S FACEBOOK PAGE

Cuntapay (letting down her hair, which falls all the way to her buttocks, and making her famous “aswang” face for the photographer): Every month ko pinapaputulan ito for the past four years. ’Di ko po kasi afford bumili ng maraming shampoo. Humingi po nito si Mon Confiado (actor).

How did you come up with “Six Degrees”?

Jadaone: This was originally a short film titled “And the Winner Goes To…”

I submitted this to Cinemalaya the year before and we made it to the semifinals, but it was still in narrative format. I rewrote it, changed it into a mockumentary, then submitted it to Cinema One with the same title.

How did you meet Lilia?

Jadaone: I work for GMA 7 and Nay Lilia always has TV appearances there.

What was your initial reaction to the project, Lilia?

What was your reaction to winning best actress? 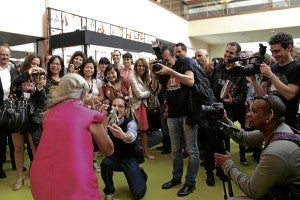 MEMBERS of the international press scramble for a snapshot of Nanay Lilia in Udine. PHOTO FROM LILIA CUNTAPAY’S FACEBOOK PAGE

Was that your first trip abroad?

Weren’t you once a teacher, too?

Do you have children? 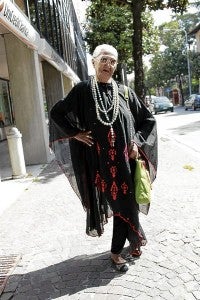 BE ITALIAN “I never thought I’d be invited to this event,” says the actress. PHOTO FROM LILIA CUNTAPAY’S FACEBOOK PAGE

How much of the film is based on Lilia’s real life?

Villamin: Sobrang interesting niya as a person and as a coactor.

How did you end up in show biz?

Lilia, you used to be a talent agent?

What are your plans for the movie?

Jadaone: There are talks for a commercial release. Gusto talaga namin ’yon kasi work of love ito, inisip ko magpa-screening to thank all those who supported us. Sana matuloy before the world ends (laughs).

What have you learned from directing your first full-length film?

Will you keep making films after this?