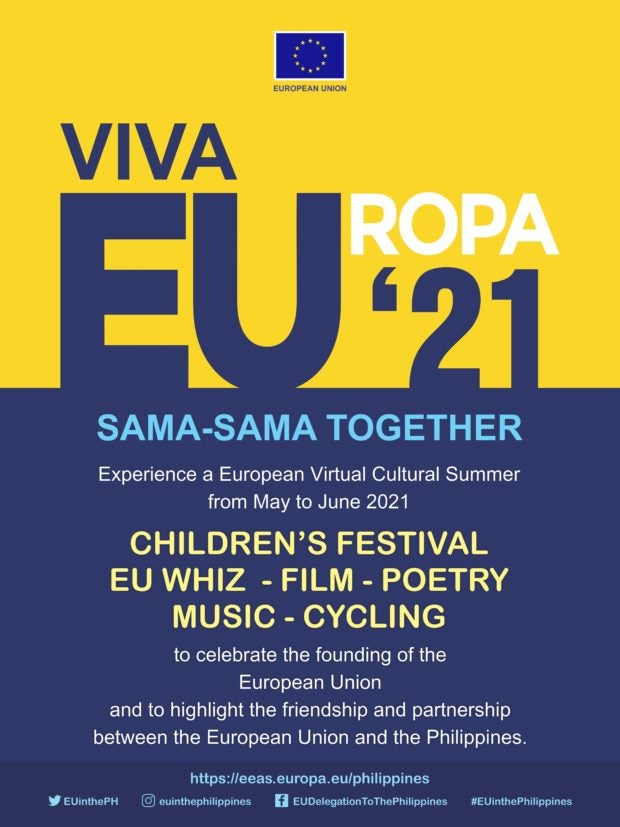 Image: EU Delegation to the Philippines

Going digital once again, the European Union (EU) Delegation to the Philippines will be pushing through its annual cultural festival amid the pandemic.

Through “Viva Europa 2021,” which aims to strengthen European-Filipino ties, artists from both cultures will be given platforms to share their artistry through a slew of different activities from May to June, the EU revealed in a release earlier today, April 22.

The summer fest will be packed with unique events including a film festival, intercollegiate competitions, concerts, as well as webinars on Europe’s renowned space programs and many more—which Filipinos will get to watch and participate in for free.

Films have always been an “important signature component of the Viva Europa festival,” according to the EU, and “this year will be no different” as the Union takes it online for the second time.

Filipinos will be able to watch seven “carefully selected” movies made by European filmmakers through the “EU film festival and Europelikula” from May 5 to June 5.

While enjoying the film fest will be completely free, the EU noted in a press conference earlier today that interested individuals will need to register first. More details will be provided via the EU Delegation to the Philippines Facebook page in the future.

Here is the list of the films to be featured at the festival: 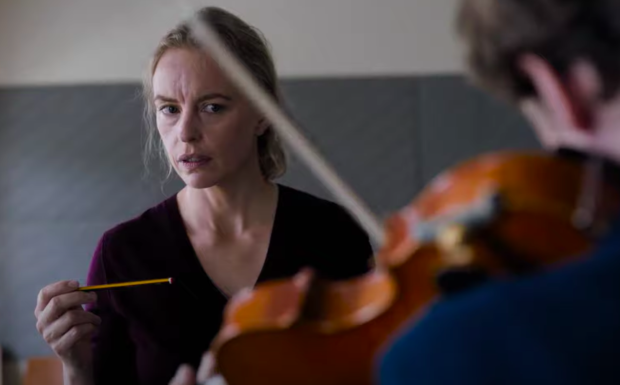 A scene from “The Audition” (“L’Audition”). Image: screengrab from YouTube/UniFrance

These movies will be accessible through the Festival Scope platform that is being set up by the EU headquarters in Brussels, Belgium, according to the EU Delegation.

Showcasing poetry focused on “friendship/partnership,” the EU will also stage the “Bersong Euro-Pinoy” recital featuring Belgium, Czech Republic, Denmark, Germany, Spain, France, Italy, Austria and Poland. The event will be held on May 21 and 28 at 6 p.m.

One of the participants will be German artist-actress Luisa Katharina Davids, who will recite the German translation of Jose Rizal’s “Mi Ultimo Adios” for the first time.

The said performance will also come amid the German Embassy’s unveiling of Rizal’s former furniture from Heidelberg, Germany, and an official marker with the German translation of “Mi Ultimo Adios” at the Museo ni Jose Rizal in Intramuros, Manila, all happening this year.

Carl Norac, Belgium’s fourth National Poet and a prize-winning poet-author of many widely acclaimed and best-selling children’s books, will also recite his own poems. His works have been translated into 47 languages so far, and among these is his bilingual children’s book “My Daddy Is a Giant,” which appeared in Tagalog-English back in 2005.

Several members of the European embassies will also be reciting works from famous authors. For one, a representative from the Embassy of France will read Victor Hugo’s famous poem “Amis, Un Dernier Mot,” while Danish Ambassador Grette Siallasen will read Hans Christian Andersen’s “Det er Liv et Reise” (“To Travel Is to Live”).

Filipino poets will in turn share their talents with the world. A number of poets from the De La Salle community will be performing their works both in Filipino and other local languages at 5 p.m. on May 28.

These authors and their works are:

Two poets from Ateneo de Zamboanga University (AdZU) and Mindanao will, meanwhile, read their pieces in their dialect at 6 p.m. on May 21, namely Hiligaynon poet M.J. Cagumbay Tumamac of Southern Mindanao, the Makata ng Taon 2019 titleholder and Chavacano poet Sigrid Gayangos from Zamboanga City/Dumaguete City, who is a 2018 Palanca awardee.

The embassies of the Czech Republic, Germany, Spain, France, Italy, Austria and Poland will be providing performances for Filipinos at 6 p.m. on June 4, which will also be free to watch on Facebook.

“A highly acclaimed contemporary dance titled ‘GUIDE’ will be performed by Věra Ondrašíková and Co. from the Czech Republic,” the EU said in the release.

The Far Eastern University (FEU) and the EU Delegation to the Philippines will also be regaling Filipinos with choral music from 8 p.m. to 9:30 p.m. every Saturday in May. These days will fall on May 1, May 8, May 15, May 22 and May 29.

“Watch the choirs perform famous music from folk to classical from both the EU and the Philippines during the [month-long] choral concerts,” the EU said.

Also in collaboration with FEU, the EU will hold an intercollegiate competition titled “EU Whiz: Filipino Youth of the FEUture,” which is also endorsed by the Commission on Higher Education.

The EU noted that the competition, which has been around since 2006, “has been a fun and exciting way for Filipino students to showcase their knowledge and understanding of the EU and EU-Philippine relations.”

Apart from the quiz, the competition has also been expanded to include two more events: the “My Space, My Rights” video competition and the “Green ECO I See” digital art competition.

“This year also marks the first time that all events will be held online as a result of the pandemic,” the EU said, thanking the Czech Republic Embassy for its support.

The EU Delegation to the Philippines only started staging its Viva Europa events online last year due to the COVID-19 pandemic.

Filipinos will also get the chance to learn about the EU’s Copernicus and Galileo space programs and “how these technologies are used during the pandemic and in disaster preparedness” through a webinar titled “Beyond the Stars, Reach out to the Skies” on June 25, from 3 p.m. to 5 p.m.

Space scientists from the European Commission and Hungary will join a roster of local speakers and participants from the Philippines.

The EU also disclosed that the webinar will be held in conjunction with the launch of the EU-Philippines Copernicus Cooperation National Program.

Meanwhile, the Danish Embassy and Intramuros Administration will present free webinars on “Bicycle Tourism, Road Safety/Etiquette, Bike-Friendliness and People-Centred Architecture” at 9:30 a.m. on May 21.

On the same day at 3 p.m. to 4:30 p.m., the public will be able to watch the webinar titled “Starter Sessions: Your Guide to Be a Bike Friendly Business” hosted by The Royal Netherlands Embassy and the Makati Business Club.

These webinars will be done with the goal of helping Filipino businesses learn the best practices from the Dutch, who are famous for their love of cycling.

To commemorate the 700th death anniversary of the renowned Italian author Dante Alighieri, the EU will also hold a webinar discussing the poet’s major work, the “Divine Comedy.”

This webinar will talk about the relevance of the said classic “to contemporary Filipinos and investigate two important aspects of cultural transmission: teaching and translating.”

Prof. Paul Dumol of the University of Asia and Pacific and Profs. Michael Coroza and Jonathan Chua of the Ateneo de Manila University are resource persons for the webinar.

The EU will also hold the “Lakbayin Natin ang EU”  (“Journey to the EU”) festival at 10 a.m. on May 16, which will feature several activities for Filipino children and families.

“The EU Delegation together with the Embassies of Czech Republic, Germany, France, Italy through the Philippine-Italian Association, Austria and Poland have prepared the best of European stories and tales, games, languages, film, music, arts and crafts for Filipino children,” the EU said.

“The art of creating friendship bracelets in line with the theme ‘Friendship and Partnership’ will be taught to kids during the festival,” it added.

Among the programs for the children is a storytelling session conducted by the National Library of the Philippines, which will also be aired for free via the EU Delegation’s Facebook page.

Viva Europa 2021 “aims at highlighting the partnership, friendship and the shared cultural values between the EU and the Philippines and in the context of the bilateral Partnership and Cooperation Agreement,” according to EU Ambassador Luc Véron.

The mentioned deal is a legally binding agreement between the EU and Third World countries, according to the EU Monitor. Through this, the EU “works to support the democratic and economic development of a country.”

On why the EU focuses on a cultural collaboration, Véron explained earlier in the briefing that “culture is a part and parcel of who we are and part of our foreign policy. It is not just our hearts but it represents the souls of humanity.”

“Cultural cooperation counters stereotypes and nurtures dialogue, open-mindedness, dignity and mutual respect. It is also a means to deliver important social and economic benefits both within and outside the EU,” he added.

The ambassador also shared that such a collaboration with the Philippines is not a hard thing to pull off, as we are a country that has “such great talents for music, whether it be singing or dancing, or in other genres such as visual arts, literature, sculpture or theater arts.”

Viva Europa 2021 will also mark Europe Day on May 9, for which the EU has adopted the tagline “Sama-Sama Together.” On why they chose this phrase, Véron said it is “to convey the values of friendship [and] partnership we have with the Philippines as well as the cooperation, solidarity and togetherness that we need to nurture especially in these trying times.”

The said festival is the “outcome of a fruitful cooperation” between the EU Delegation to the Philippines, the Embassies of Belgium, Czech Republic, Denmark, Germany, Spain, France, Italy through the Philippine-Italian Association, Hungary, Austria, Poland, Cultural Center of the Philippines, AdZU, De La Salle University and FEU.  /ra