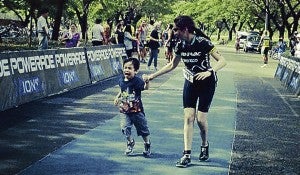 Lucky girl that she is, GMA 7 star Jennylyn Mercado found a way to turn a career slump into a productive period for self-improvement.

Since the end of the afternoon soap “Futbolilits” in October, she has slowed down, with only her hosting chores in the weekly afternoon gab fest “Showbiz Central” keeping her occupied.

Instead of moping, Jennylyn engaged in sporting activities. She took jujitsu and Muay Thai lessons in her free time. “They built up my muscles. I looked heavy onscreen,” Jennylyn recounted. “I realized that I needed cardio exercises to slim down.”

She discovered running and biking, which soon led her to join duothlon competitions in Alabang and Laguna.

She competed twice in Alabang. “A race usually started with an 8-kilometer run, followed by 40 km of biking and another 3 km of running.”

In her last race, she clocked in at two hours and 30 minutes. “It was hard. There were 500 participants, among them elite athletes. It wasn’t my goal to place first. I just wanted to finish strong and to keep on improving.” 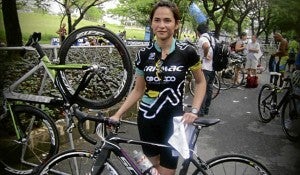 Takes to the bike as part of her triathlon events

Now she’s preparing for the Iron Man triathlon in Cebu, set in August.

“I try to train four times a week. But I’m busy with work again so I get to practice only twice a week,” she said.

Triathlon somehow prepared her for her current work schedule, which is grueling.

Apart from “Showbiz Central,” she has a guest stint in the coming prime time soap opera “Makapiling Kang Muli.” She is also set to resume her hosting chores in “Protégé” season two.

She will also do a new horror movie, “Guni-Guni,” with Regal Films. A new afternoon soap is in the works, too. 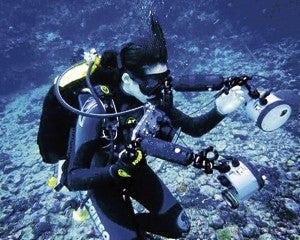 Scuba dives in her leisure time

“Triathlon isn’t easy,” Jennylyn explained. “But it’s fulfilling to finish a race. It makes all your hard work seem worthwhile. That I lost weight is just a bonus. I’ve noticed that my stamina has improved, too. I’m no longer as sickly as before.”

Another bonus is that sports and the great outdoors allow Jennylyn to spend quality time with boyfriend Luis Manzano.

Jennylyn had previously checked out other dive spots in the country—Cebu, Bohol, Boracay—but Batangas proved special, for obvious reasons.

“Batangas has a lot of dive spots,” she said. “I wasn’t aware that there was such a place in Luzon. It’s near Manila, but it still has beautiful and unpolluted waters. And down there, it’s a different world.”

Diving has taught her to be more environmentally conscious.

“When we dive and we see trash, Luis and I make it a point to bring it back on land,” related Jennylyn, who celebrated her 25th birthday on Tuesday.

Luis and Jennylyn have clearly hit it off. (Although he’s a Kapamilya, he guested in her birthday celebration in “Showbiz Central” last Sunday. Earlier, she appeared in his ABS-CBN game show “Deal or No Deal.”)

She admitted that he helped her in TV hosting as well.

“When my script for ‘Protégé’ [season one] arrived, he was visiting me at home,” she recalled. “I was embarrassed at first about rehearsing in front of him. But he insisted on giving me pointers. I learned a lot. He told me that I should try to make my spiels more interesting and colorful.”

Jennylyn said hosting (and Luis) encouraged her to overcome her shyness. “My communication skills have vastly improved. Now, before I interview someone, I do research. I come to the set prepared.”