Back with his abusive girlfriend | Inquirer Entertainment
Close
menu
search

Back with his abusive girlfriend

Handsome actor’s mom is fuming. She was relieved when HA broke up with Sexy Starlet.

(Mom never liked the girlfriend, whom she finds loud and crass. Worse, SS had the nasty habit of smacking HA on the head. It was her way of showing her affection, SS insisted. Is she related to the Three Stooges?)

However, it seems HA couldn’t get enough of the abusive girl and ran back to her. He says he had his first taste of bedroom mazurka with insatiable SS. Was that why HA looked dehydrated?

Sexy Actress and Drama Star were screen sweethearts. In real life, they hated each other’s guts. To their credit, they managed to hide the animosity and even won accolades for their stirring performances as passionate lovers.

SA insists that DS was unpredictable on the set. Could it be because his love life was in shambles at the time?

Talented Performer has long been thought to be gay.

On an out-of-town gig, TP shared a hotel room with Reality Cutie. TP must’ve been on cloud nine.

RC is quite the dreamboat. Was that TP grinning from ear to ear on the beach of the world-famous summer destination?

This one makes us doubt the criteria of an esteemed award-giving body.

Hunky Actor won a coveted award from this group. Perhaps HA did exceptionally well in that project, but consistency is clearly not one of his gifts.

In another high-profile project, HA was sacked. The director wasn’t pleased with HA’s lackluster performance and replaced him with Stud Muffin.

Singer-actress Lea Salonga denies the rumor that she was to appear as mentor in the reality show “American Idol,” where Filipino-Mexican-American Jessica Sanchez is competing this week as one of the Top 3.

Salonga was on tour in the United States at the time the scuttlebutt made the rounds. She told Rushes she was “about to come home.”

Piolo Pascual, asked about the biggest lesson his mom taught him: “’Yung pagiging strong, maka-Diyos at disiplinado. At … pagmamahal sa pamilya.” (That would make a perfect man.)

Jaclyn Jose’s message to Rina and Albie Casiño: “Wala ba kayong ibang magawa? Go to the beach! Have fun, just relax, chill!” (Or maybe this one.)

HELEN glad to be friends with Mega again

Ramon Tulfo, asked if his macho image was affected by the mauling in Naia: “Maaaring natalo ako, pero lumaban ako.” 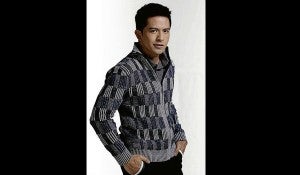