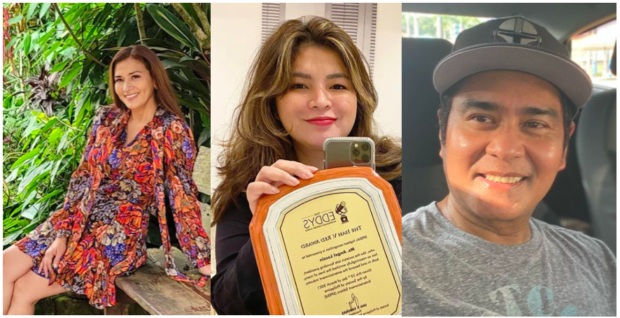 Celebrities expressed their disappointment over alleged poaching within Philippine territory by Chinese fishermen aboard huge vessels.

“Who’s stopping them?” Zsa Zsa Padilla asked as she reposted a report by Philippine Daily Inquirer on her Instagram page last Friday, April 16. The report states the Philippines could face a possible fish shortage because around 240,000 kilos are being taken by Chinese vessels in the West Philippine Sea.

She also quoted a statement from Villardo Abuene, president of the Homonhon Environmental Rescue Organization, who said the Chinese fishermen were “overfishing” and “depleting marine resources” in Philippine waters.

Other celebrities also aired their sentiments on the issue through Padilla’s post, and most of them appeared to be in agreement with the singer.

“Thank you for this,” esteemed actor John Arcilla told Padilla. “It’s Showtime” host Amy Perez was also saddened by the situation and said it is “so devastating.”

Meanwhile, actor Robin Padilla, known to be a fervent supporter of the Duterte administration, did not give an answer to Zsa Zsa but showed her a report that says Vietnamese fishermen are the most frequent poachers in the Philippine seas.

Netizens answered him back, with one @maryvicpuentespina asking him, “So ok lang kasi ginagawa ng Vietnam?” (So it’s okay [for China to do it] just because Vietnam does it too?). Others told him to “wake up” and stop defending the government. 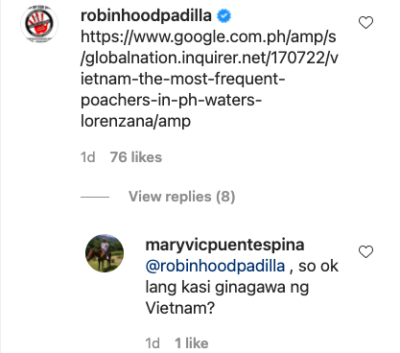 Over the past years, Filipino fishermen have been driven away from the shoal by Chinese coast guards and fishing vessels. The National Task Force for West Philippine Sea conducted a sovereignty patrol on April 11, where they found about 240 Chinese vessels throughout the Philippine waters.

The Philippines has demanded the withdrawal of the vessels from the Julian Felipe Reef in March, but China ignored the protests and continued to claim ownership of the area within the Philippines’ territory. JB