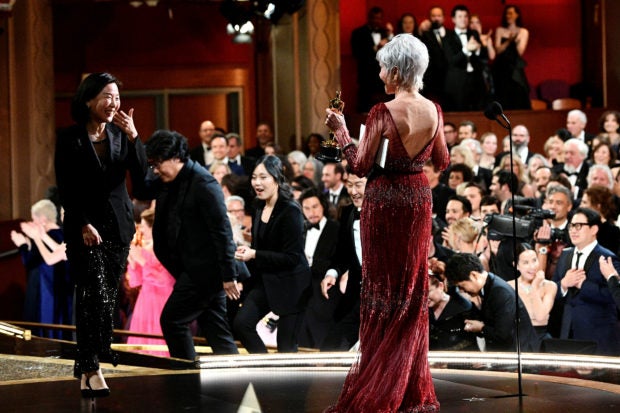 LOS ANGELES — In a Tuesday meeting for the studio and personal reps of Oscar nominees, producer Steven Soderbergh called the logistics of organizing this year’s ceremony “mind-numbing.”

The producers announced they would add venues in London and elsewhere for participants who are not able to travel because of COVID restrictions.

“London is 100 percent confirmed. We’re in negotiations with the location. We cannot share it with you yet. There are no more tickets… It is nominees plus one,” Sher told the meeting attendees.

Soderbergh and co-producer Stacey Sher apologized for the confusing guidelines and reiterated that the producers are still figuring out this year’s challenging ceremony.

“We’re so sorry for the frustration that our silence has caused. It’s not because we don’t care. It’s not because we aren’t listening or that we’ve been caught off guard by the complexities of the show,” Soderbergh said. “Every day since the nominations came out, we’ve had an internal debate whether to release information about what we’re doing even though that information is often etched in Jell-O.”

Collins said, “We have an opportunity to do something special and in a safe way and deliver on that and show that this show is really the pinnacle and that we’re going to do something different from everybody else in getting us back towards what people want which is some sense of community and normalcy.”

The meeting, which was twice postponed, took place over Zoom on Tuesday morning. Soderbergh had to duck out pretty quickly because he is currently shooting. After brief remarks from Sher and Collins, the two left the meeting before Academy reps and COVID coordinator Dr. Erin Bromage answered questions from the publicists.

All performances for the original song category will be performed in Los Angeles, the producers noted. It has not yet been decided if attendees will be asked to wear masks when seated.

For attendees coming to Los Angeles for the show, their quarantine requirements will be based on a number of factors, including where they’re coming from, vaccination status and if they’re currently working in a COVID bubble.

Everyone will have to be tested upon arrival in the city using an at-home kit provided by the Academy that will be processed at a lab being set up at the JW Marriott in downtown Los Angeles. Another COVID test will be administered in person at the hotel the weekend of the Oscars.

Bromage emphasized that he is working with L.A. County public health officials.

Studio and personal publicists will not be permitted to attend. Each nominee and companion guest are being asked to arrive together in the same car, which should be a town car or SUV. There will be hair and makeup stylists on site for touch ups.

The red carpet will be scaled down to just 20 outlets that are licensed to broadcast the Oscars. Four photographers will be credentialed for the carpet.

A pre-event reception for nominees is expected to take place on April 24.

Producers revealed in a letter to nominees on March 18 that there would be no Zoom options for nominees who were unable to attend the ceremony, a decision that was met with backlash from foreign nominees and others who were shooting projects in other countries.

“We are going to great lengths to provide a safe and enjoyable evening for all of you in person, as well as for all the millions of film fans around the world, and we feel the virtual thing will diminish those efforts,” they wrote.

Nominees and presenters were told they would be allowed one guest each to the ceremony, which will be held as an open-air production at Union Station in downtown Los Angeles. Musical performances are believed to be taking place at the Dolby Theatre. Later, as Variety exclusively reported, attendees learned that producers were mulling plans to rotate groups of people in and out of the area where the awards are being handed out, as a COVID precaution. Cleaning crews would sanitize chairs and tables between the rotations.

Academy reps have been mum on any plans other than what the producers’ letters explained. As with any plans being made during the pandemic, participants are being told that the situation is fluid and nothing will be set in stone until the day of the Oscars.

The Oscars were originally set to take place Feb. 28, but were postponed due to the pandemic. JB

Read Next
Liza Soberano looks into the future with Enrique Gil on his birthday: ‘To growing old together’
EDITORS' PICK
COVID surge moves outside NCR, raises cases by 200% in provinces
SMDC’s Style Residences: A real estate investment that will always be on-trend
BBC StoryWorks and TECNO make short film about inclusive mobile camera innovations bringing people together
PopCom: High mortality rate, slow birth rate due to COVID, not vaccines
Start the year right with sustainable oral hygiene with SPLAT’s eco-friendly natural toothpastes
Vaccine expert warns against deliberate COVID-19 infection
MOST READ
IATF places 4 provinces under Alert Level 4
Vaccine expert warns against deliberate COVID-19 infection
Pagasa: LPA may enter PAR by weekend
Vendor in viral video says she used to be a Duterte fan, but not anymore
Don't miss out on the latest news and information.