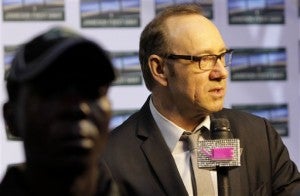 JOHANNESBURG – U.S. actor and director Kevin Spacey said he is looking for opportunity in Africa, Asia and Europe.

Spacey spoke about his outlook during a brief visit to the South African capital Johannesburg.

With backing from a whiskey company, Spacey ran an international contest to find film making talent from the United States, Russia and South Africa. A script from each country was chosen, and Spacey starred in and helped produce three films, including 26-year-old Cape Town writer-director Alan Shelley’s “A Spirit of a Denture,” which was given a red carpet premiere in Johannesburg Saturday.

Spacey, who also recently worked on a Chinese film and is artistic director at London’s Old Vic Theatre, sad, “I like the idea of going to as many places as possible and (having) as many experiences as you can.”