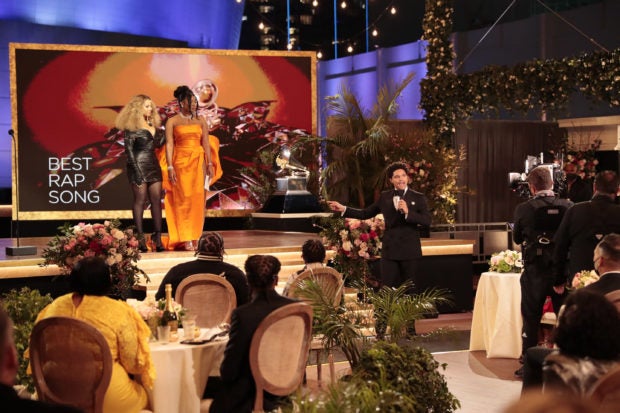 Although keenly awaited among culture sector professionals, awards ceremonies have been struggling to muster public interest since the onset of the pandemic. The latest Grammy Awards, for example, were shunned by almost 98% of Americans aged 18 to 49, and scored the worst viewer ratings in their history.

They once set the tempo in the cultural calendar, but the COVID-19 pandemic and its various restrictions have forced awards ceremonies to reinvent. Now, these events are favoring more hybrid formats, where musical performances alternate between live and pre-recorded sets. Take, for example, the 63rd edition of the prestigious Grammy Awards, held March 14 in Los Angeles.

While the ceremony was marked by many highs, it failed to win over United States TV viewers. Only 8.8 million tuned in to watch the Grammy Awards live this year, according to Nielsen data, down 53% on 2020. Ratings for this 63rd edition are particularly poor among Americans in the 18 to 49 age bracket, just 2.1% of whom followed the event on NBC or online. In comparison, 5.4% of them tuned in to the 2020 ceremony.

This drop in ratings is a worry for chiefs of the Academy of Motion Picture Arts and Science and the ABC network, who are preparing to stage the upcoming edition of the Oscars in Los Angeles, April 25. This is a particularly awaited ceremony given that it will be held over a year after movie theaters in the U.S. city were forced to close due to COVID-19. The Oscars organizers already had reason for concern after the Golden Globes, which drew just 6.9 million TV viewers in the U.S.

Although awards ceremony viewer ratings have been at rock bottom since last year, industry professionals note that the figures were already relatively disappointing, even well before the start of the pandemic.

“This is actually nothing new, but it’s accelerated,” Richard Rushfield, editor-in-chief of newsletter The Ankler told CBC News. “Things that might have taken 10 years have now happened in six months.”

Many also point to the various scandals that have recently sullied the credibility of awards ceremonies, like nomination snubs for The Weeknd at the Grammy Awards and the hit series “I May Destroy You” at the Golden Globes. Maybe the next edition of the Oscars will reverse the trend. JB

Read Next
Angelina Jolie claims having ‘proof of domestic violence’ against ex-husband Brad Pitt
EDITORS' PICK
Tired of your Wi-Fi signal problems at home? Here’s a solution!
POVA x Mobile Legends Bang Bang: A partnership that’s built to win
Infants bundled off; no one hurt in PGH fire
OPINION: Mischief Reef – where it all started
Must-know scams to avoid when buying cars
Fire-damaged PGH calls for donations
MOST READ
Leonen impeachment case moves forward in House
Hot, humid weather for PH on Monday — Pagasa
Mischief Reef – where it all started
Woman believed to be dead wakes up minutes before her cremation
Don't miss out on the latest news and information.