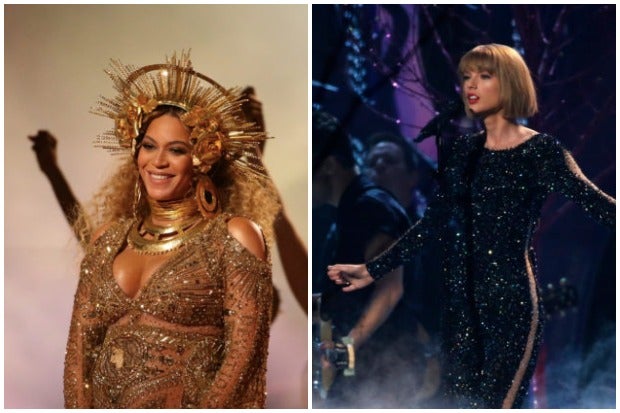 LOS ANGELES—“Who run the world? (Girls)” might as well have been the official song at Sunday’s history-making Grammy Awards as women won in every major category in a joyful night for music’s biggest stars after a devastating year for the industry.

And quite fittingly, Beyoncé, who released the women empowering song in 2011, captured four awards to break the record for most career wins by a female artist with a total of 28.

Taylor Swift also became the first woman to win the coveted Album of the Year prize three times, this year for “folklore,” the first of her twin quarantine releases.

Megan and Queen Bey earned two awards together for their remix of the rapper’s smash hit “Savage.”

The night featured a host of impressive performances featuring Dua Lipa, DaBaby, Swift, Bad Bunny and Record of the Year winner Billie Eilish, among others—a line-up that kicked off with chest-baring Harry Styles, who won his first ever award (Best Pop Solo performance) for “Watermelon Sugar.”

The ceremony, held nearly a year to the day after COVID-19 grounded tours and forced performance venues to close, stood as a concerted effort by the music world to try to move past a crushing 2020 by celebrating its biggest stars.

And there was perhaps no one bigger than Queen Bey, whose Best R&B Performance award for her summer track “Black Parade,” an homage to Black power and heritage, sent her into the Grammy record books.

“As an artist, I believe it’s my job and all of our jobs to reflect the times. And it’s been such a difficult time,” Beyoncé said, with her husband Jay-Z looking on, as she received her history-making award.

But it was the 19-year-old Eilish who took Record of the Year—a category in which Beyoncé had two nominations, one with Megan Thee Stallion—a moment that brought to mind Beyoncé’s controversial losses to Adele in 2017.

In accepting her second straight Record of the Year prize, Eilish nodded to Megan, who she said had an “untoppable” year and deserved to win.

“You deserve it, honestly, genuinely, this goes to her—can we just cheer for Megan Thee Stallion,” she told the small audience of mainly nominees and performers.

The soulful 23-year-old R&B performer H.E.R. pulled an upset in scooping the Grammy for Song of the Year for her justice-minded song “I Can’t Breathe,” which tackled Black pain and police brutality.

Swift thanked her fans, saying: “You guys met us in this imaginary world that we created, and we can’t tell you how honored we are.”

It was a less shiny night than predicted for British star Dua Lipa, who was shut out of the major categories but won Best Pop Vocal Album, for her sparkly disco ball of a record released just as the pandemic took hold.

Brittany Howard—known for fronting the band Alabama Shakes—won Best Rock Song, as Fiona Apple scored two awards for her album “Fetch The Bolt Cutters,” which many critics hailed as a masterpiece.

Though most of the rock fields were unprecedentedly dominated by women, The Strokes won for Best Rock Album for “The New Abnormal,” their first Grammy ever.

But it wouldn’t be the Grammys without controversy. The Weeknd has pledged to stop submitting music for awards consideration after he surprisingly received no nominations despite a big year commercially. —AFP