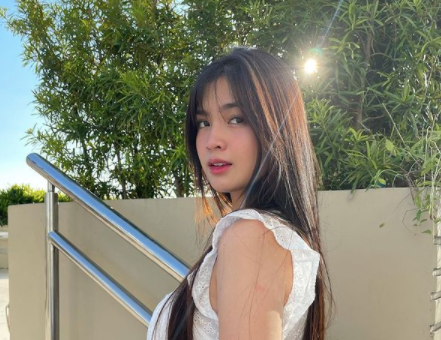 Heaven Peralejo has shut down rumors that she is the third party in the breakup of Kiko Estrada and Devon Seron.

Peralejo stressed via an Instagram Sttory yesterday, March 11, that she and Estrada were only co-actors in ABS-CBN’s drama-romance series “Bagong Umaga” and nothing more.

“Associating me with actors I have scene with can be easy. At the end of the day, we’re nothing more than just co-actors working with each other,” the 21-year-old actress stressed.

“I should not have been dragged into the personal issue between Devon Seron and Kiko Estrada. However, I will not stay silent about it especially after being harshly accused of something I didn’t and would never do,” she added. 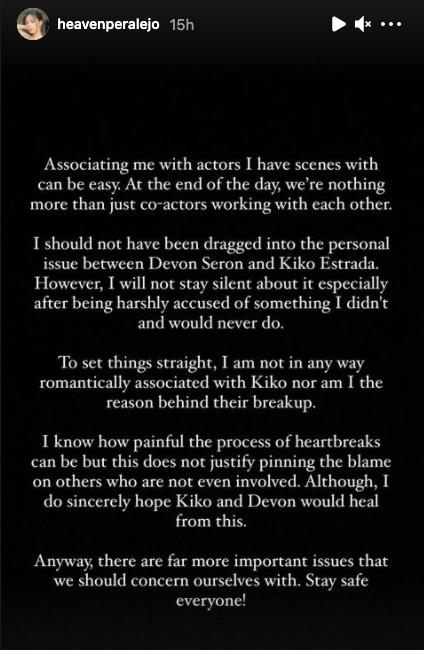 She also emphasized that she was “not in any way romantically associated with Kiko” and that she was not “the reason behind their breakup.”

“I know how painful the process of heartbreaks can be but this does not justify pinning the blame on others who are not even involved,” Peralejo stressed.

The young actress, however, still wished that Seron and Estrada would heal from this issue.

Peralejo’s mother, Shiela Luanne Peralejo-Angeles, likewise took to Instagram yesterday to defend her daughter and slam those spreading the rumors.

“I am calling out to those who are responsible for spreading lies about my daughter, Heaven, with clear intent to destroy her reputation. They are outright false and malicious,” the mother stressed.

“For days, IG posts are insinuating that Kiko Estrada has been cheating on his ex-girlfriend, unnecessarily dragging Heaven as the third party. Without even trying to know the truth, these irresponsible people took to social media with ill-intent to create a bad image of Heaven,” Peralejo-Angeles said.

Despite having “exerted all efforts to reach out” and demand that the spread of the rumors be stopped, the mother noted that these people refused to speak with her and “continued to malign” her daughter.

“Your failure to clear the name of Heaven has led to the continuing spread of these lies to which my daughter is now being the subject of social media bullying. You show no mercy!” Peralejo-Angeles emphasized.

She then disclosed that they would be bringing the matter to court to have the culprits “publicly apologize and admit to their fault.”

“Again, I appeal to you to stop committing these malicious acts of spreading falsehood and apologize publicly,” Peralejo-Angeles said.

While Seron and Estrada have yet to publicly address their apparent breakup, fans speculated that it is the case after Seron posted a cryptic message on March 9 that said, “The tongue may hide the truth but the eyes never.”  /ra

Read Next
A paw-some indoor park & café coming soon at SM City Fairview!
EDITORS' PICK
Metro Manila posts lowest temperature yet this ‘amihan’ season at 19°C
Over 3 Million worth of prizes to be won at Smart Padala’s SENDali Manalo Promo!
Acer starts the year off strong with the Aspire Vero National Geographic Edition
DOH: 28,471 new COVID-19 cases in PH; active cases now 284,458
On Day 2 of implementation, gov’t says workers now exempt from ‘no vax, no ride’ policy
Gear up and get ready to play with Yamaha Mio Gear
MOST READ
Emma Stone calls Andrew Garfield a ‘jerk’ after he ‘lied’ about his ‘Spider-Man: No Way Home’ appearance
LOOK: Edu Manzano, Cherry Pie Picache enjoy Palawan with her son Nio Tria
Unvaccinated has rights but it has limits—DOJ
Retirements prompting major reshuffle in PH military
Follow @IBiongINQ on Twitter
Don't miss out on the latest news and information.