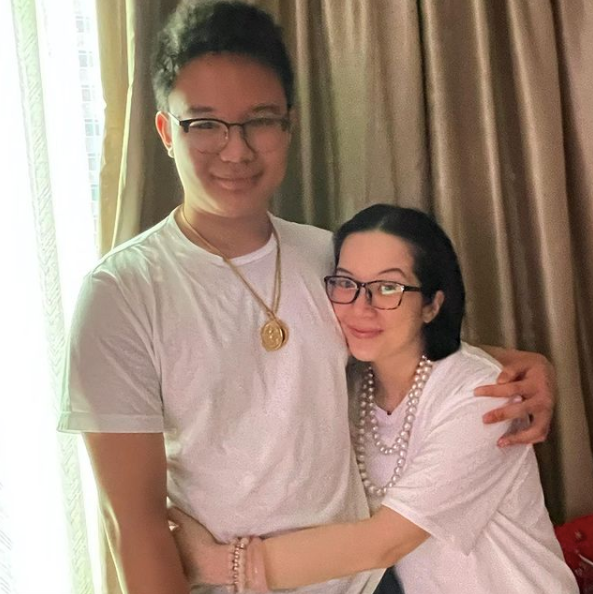 Kris Aquino defended her children after they became targets of damaging comments online over the past week.

“I am not blind, and I am not stupid… in a span of a week my children have been used to trigger me,” the host-actress stated in an Instagram post today, March 7.

“Kuya Josh with zero factual basis was said to have impregnated a girl. Bimb has been repeatedly targeted with bullying because people are insisting he is gay,” she said.

“Regarding Kuya Josh, name us and show us the girl. About Bimb, he is 13 years old, [I] know my son doesn’t identify as being gay BUT in the event he ever does, he will still be my son.”

“The bullying you are doing is a reflection of your homophobic attitudes that are no longer welcome in 2021,” she declared.

Bimby was subjected to comments about his sexual orientation after he appeared in a video having dinner with his mom and fashion designer Michael Leyva last March 4. At one point, Aquino tells him off for covering his mouth with his hands while he laughed, telling him, “Wag kang ganyan (Don’t be like that).”

While people observed that he had adopted his mom’s own mannerisms — given that she has been raising him on her own — others jumped to conclusions about his sexuality based on the video, with some even making disparaging remarks.

There are also social media users who have come to Bimby’s defense, like one @Hansolodc who shared a clip from the video and said, “Just a daily reminder that people’s voice pitch or physical movement doesn’t represent their sexual or gender identity.”

Aquino, now on fight mode, appeared to hint at joining politics if attacks made against her sons continued.

“What is very clear to me is that some people cannot stand the fact that despite all their efforts to bury me, [I] am still standing. And they must be cringing that at a time when our country is hungry and struggling, as a private citizen, [I] am doing my part with my [hard-earned] money, to share with those in need,” she said.

“You picked the wrong children to harass and bully because this mother knows your motives… what does a lioness do when her cubs are threatened? She attacks.”

“Leave my children alone and [I] will remain a private citizen,” she said. “Continue messing with them then you are pushing me in the direction you are so obviously afraid [I] will take. That yellow brick road is starting to look very inviting now. “

Fighting homophobia is nothing new to Bimby — at just 10 years old, he appeared in one of Aquino’s vlogs in 2017, stating, “People think like I’m a homosexual.”

When his mom said, “Don’t be homophobic, right?” Bimby agreed and stated, “Why would you judge a child?”

Bimby is Aquino’s son with PBA player James Yap, while Josh, 25, is her child with actor Phillip Salvador. JB