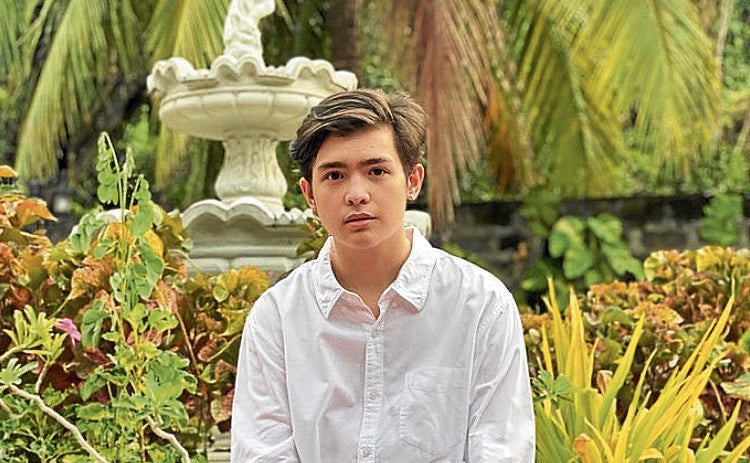 Joaquin Domagoso is fully aware that stepping out of the shadow of his father, Manila Mayor Francisco “Isko Moreno” Domagoso, will be a tall order. But that doesn’t deter him from pursuing his dream of becoming an actor and making his own name in show biz.

“It will be hard … There will be challenges. But I have accepted that. I will have to deal with them one way or another anyway,” he said in a recent virtual group interview for GMA 7’s upcoming romantic comedy series “First Yaya.”

“At one point, I realized that my father is my father and I’m me,” pointed out the 19-year-old newbie. “How far I can go [in the industry] will be up to me.”

No one forced Joaquin to enter show biz. Performing is something he has always been interested in. And as a naturally bibo kid, he felt that being a celebrity would be a fitting choice.

“Papa didn’t tell me to do it—no one did. I’m really hyperactive, so I thought that this would be a good outlet for a person like me; that it’s a job I can do,” Joaquin told the Inquirer. “And GMA 7 was already interested in getting me even before my dad won [in 2019]. I went with them because it’s where my dad started, too.”

Like many celebrity parents, Mayor Isko’s only requirement is for his child to finish college.

“He always reminds me not to take school for granted. That’s the most important thing for Papa, because that’s something he didn’t get the chance to do when he was younger. He was always working,” he said. “But now he has the means to provide that for me.”

Joaquin, who’s in his second year as a business entrepreneurship student at Southville International School, added: “There will be a slight conflict because I also want to do show biz. But he told me that as long as I can do both of them properly at the same time, it’s fine with him.”

In “First Yaya,” which will be topbilled by Sanya Lopez, Joaquin will be paired with Cassy Legaspi, with whom he had instant chemistry. Working with her is easy, he said, because their personalities jibe.

“There’s kilig in our scenes. And even the crew feels that. One time, they cheered after one of our scenes,” said Joaquin, who used to perform production numbers together with Cassy in the defunct variety show “Studio 7.” “We have been friends for quite a while.”

A thing he admires about Cassy is that she wears her heart on her sleeve.

“If she’s sad, she’s sad. When she’s happy, she’s always smiling and giggling,” observed Joaquin. “I was nervous when we first started taping, but I became more chill and comfortable the more I talked to her. She’s so friendly and welcoming to everyone.”

Joaquin is also amused that there are already fans “shipping” them, even if the show has yet to air.

“I have been seeing fan-made montages of our photos on TikTok. And that’s good for us! I love that,” he said.

The primetime series revolves around a nanny (Sanya) who unexpectedly becomes a “first yaya” after her boss, the Philippine Vice President (Gabby Concepcion), ascends to the presidency. The theme hits close to home for Joaquin, because he, too, was raised with the help of a nanny.

“I had my yaya when I was about 5 years old and then left when I was 14, because she decided to get married. It hurt when she left us because, at that point, she was no longer a yaya, but a family member,” he said. “It was a painful goodbye, but we still chat from time to time.”

Despite his first soap being shot through locked-in tapings, Joaquin said he still had a lot of fun.

“We get to work, sleep, wake up with everyone … we do everything together. And I actually think it’s more fun that way,” he related.

Joaquin didn’t have expectations when he decided to pursue acting. But now that he has been doing it for the past year, he said he had become more fascinated with how things work behind the scenes.

“Now that I’m part of it, I can’t help but get amazed,” said the young actor, who also expressed interest in directing. “But let’s see—I’m still a kid!”