As handpicked by beauty experts from California and Manila
By: Cynthia De Castro
AJPress / 05:57 PM May 12, 2012 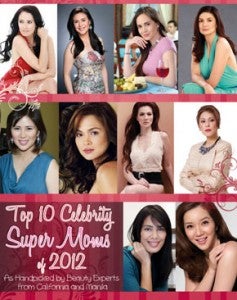 “Our criteria is that the winning celebrity mom is the one who has managed to retain her beauty and figure despite motherhood, and who has successfully balanced her career in showbiz and her responsibilities as a mommy,” explained Monet Lu.

Here are the Top 10 Celebrity Moms (based on Monet’s poll) in random order.

Ruffa Gutiérrez belongs to a rare breed of women who is endowed with classical beauty, perfect figure, elegance and intelligence. The Filipina model, beauty queen and actress is truly worthy of being Binibining Pilipinas World (1993) and Miss World 2nd Princess. She was also the Philippine winner to represent the country at the 1992 Look of the Year (now Elite Look) modeling search in New York, USA.

A single mom with two precious daughters, Lorin and Venice, Ruffa has been able to make her daughters her priority in life, without sacrificing her showbiz career.

Talking about motherhood, Ruffa told the Asian Journal: “For me, motherhood is  not really about difficulty. As a matter of fact, I welcome it. I love it. And if I can have another baby na walang tatay, I would do it. For me having children and taking care of them is not a sacrifice, because I enjoy doing it,” said Ruffa who admitted that her daughters also look for a father figure. She hopes she can find the right man for her, who will also love her daughters as his own.

“She always used to say na ‘Ruffa wag kang masyadong maging lenient sa mga anak mo. The formative years of their lives are from the ages one to seven. So, kailangan dun pa lang, i-train mo na sila. Disiplinahin mo na sila.’ And of course, being a single working mom, I have to have both, ‘yung pagke-care and at the same time, ‘yung pagdi-disiplina din sa kanila,” Ruffa admitted.

When popular actress Krista Ranillo got married and gave birth to her son, Nate, she decided to leave showbiz to concentrate on her family.

“Right now, my main focus is raising Nate. My husband Jeff  wants me to be involved with our food service division but for me, more time is spent with Nate because I want to be there for every milestone of our son’s first years of life. I go with Jeff to check on the stores and I attend our meetings for The Hut and even read financials. Whenever we open stores and even during construction, we take Nate with us everywhere we go. We travel and do business as a family unit,” said Krista.

Obviously enjoying motherhood, Krista said, “The best thing about being a mother is how it makes us stronger as husband and wife. I realized that as my love for our son grows everyday, so does my love for my husband. I love seeing Jeff take care of Nate and the way he looks after him and is very protective of him. The second best thing is seeing our son grow up, his personality developing, how he’s changed and matured in just one year. I also love how he looks for no one but mommy. No one can comfort him like mommy does. Nakaka-kilig.”

Krista’s advice to new moms: “There are a lot of classes and books about raising children but personally i think that as a new mom the best advice is that you shouldn’t be too hard on yourself. Give yourself time to recover from childbirth, have time for yourself, feel beautiful always. Having a child can be overwhelming that you forget about yourself. But remember to find what makes you happy apart from your child. Go on dates with your husband, get your hair done, do yoga. A happy mommy equals a happy home. Of course, more important than anything is prayer. No one can give you the exact recipe of how to be a mother but praying for guidance and perseverance makes for a very strong foundation.” 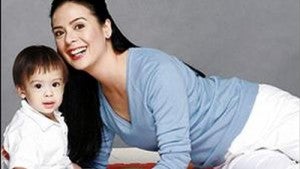 Dawn Zulueta
After a long hiatus from showbiz, Dawn Zulueta is back — looking as fresh and beautiful as she was, when she got married more than 14 years ago in New York.

In an article in Manila Bulletin, Dawn explained how she viewed her  role as wife. “I had already decided that once I get married, I was going to concentrate on my married life. So I gave up show business and the life I had. I wanted to seriously settle down, and hoped to have children right after the wedding. But that didn’t happen until seven years later,” confessed Dawn.

Anton and Dawn are blessed with two children – Jacobo Antonio and Ayisha Madlen. “Being parents brought Anton and me closer to each other. It has also, in a way, made us more responsible human beings. It changed our lives dramatically,” said Dawn.

There used to be a time when Lucy Marie Torres was more popularly known as the wife of celebrity hunk, Richard Gomez. But those days have long been over, since Lucy has been able to carve out an identity of her own — being an actress, a model, a host, and since 2010, a politician.

Whenever the beautiful Congresswoman from the 4th District of Leyte is asked about her priorities, she is always quick to say her family: Richard and daughter Juliana.

Her vision for her district confirms her love for her child. She said in an article in the Leyte Samar Daily Express,  “I envision to develop a child – centered society. Hence, I am behind the cause of children, specially those in the marginalized group. I hope we will all unite to prevent them from being trapped in poverty.” 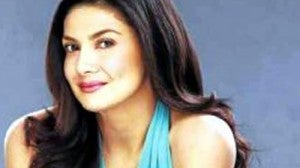 Charlene Gonzales recently celebrated her 38th birthday on May 2, but was inundated with birthday surprises and greetings by husband, Aga Muhlach and their twins, Andres and Atasha on a pre-birthday celebration at the The Buzz on April 30.

Aga was replete with praise for his wife, saying that she has been very supportive in everything he decides to do. Aga said that his marriage to Charlene is his definition of perfection. He is proud of the fact that Charlene prioritizes their family above everything else.

During her 38th pre-birthday celebration in The Buzz, Andres and Atasha described their mom as “loving, compassionate and respectful.” Andres even said that he plans to apply R-O-R to his mom.

Meanwhile, Atasha has vowed to help Charlene when she grows up. She regards her mom as her bestfriend and hopes that she continues to be the “”loving, best mom” that she already is.

Judy Ann Santos has become a favorite mom endorser, which is not surprising since Juday (as she is fondly called) is a fiercely devoted mommy to her two kids, Yohan and Lucho.

Motherhood seems to become Juday, as Monet Lu said of the beautiful actress and wife of Ryan Agoncillo. “She has developed from a child actress to a beautiful woman and a great mother who has balanced her priorities well,” said Monet.

In several interviews in the past, Juday has often said that becoming a mommy has taught her to be a selfless individual. “Totoo pala ang sabi sa akin ng friends ko who are moms. You are not allowed to get tired. You really have to be a giving person,” she said in an article by Ed Sicam (Switching Channels).

The mother of twins and wife to Zoren Legazpi, Carmina Villaroel admitted that motherhood made her realize that she could “love unconditionally.”

“Nung naging mommy ako, doon ko lang naintindihan ‘yung unconditional love. ‘Yun pala ‘yun, pagdating sa mga kids mo, you will do anything and everything for them. Ngayon huli ko nang iniisip ang sarili ko. Every time I do something, or Zoren and I make a decision, it’s always for them,” Carmina admitted in a story about her in Smart Parenting.

Carmina said that another secret to being both a mother and a friend to her twins is constant and open communication. “Be open and honest, even if it means admitting what you don’t know, ” she said.

After living in the States with former husband Norman Bustos and daughter Ashley Nicole, Sheryl Cruz decided to make a comeback in the world of Philippine showbiz. Immediately, the still very pretty and slim Sheryl got swamped with movie and TV offers.

But while she is busy in her career, Sheryl continues to maintains that “family is top priority.”

Popular celebrity and TV and movie actress Angel Aquino still looks every inch the ramp model that she has long been known for. It’s hard to believe that the statuesque FAMAS and Gawad Urian Award-nominated Filipino film and television actress already has two teen-aged daughters, Iana and Thea.

Angel is a favorite of many fashion designers because of her slim figure and her Filipina “kayumanggi” beauty, revealed Monet Lu. She has maintained her figure and her beauty, even as she developed her career and raised two daughters.

Known as the Queen of All Media, and Philippines’ Queen of Talk, Kris Aquino is said to be the highest paid celebrity in the Philippines. Not only being successful in her TV and movie career, Kris is also a successful businesswoman. She owns a couple of restaurants, an upscale flower shop, a boutique and agency and other ventures.

Despite her success in her career though, Kris maintains that her two sons, Joshua and James, are her main focus in life. Whenever she’s free, Kris makes it a point to spend time with her boys. “Kris likes to travel with her sons and says that taking them to many places form part of their education,” said Monet.