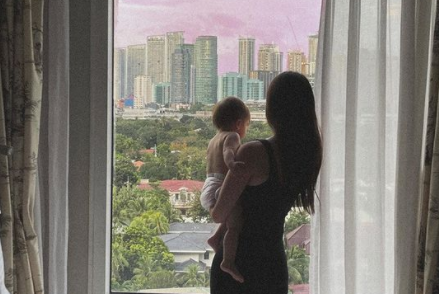 Anne Curtis and Erwann Heussaff have finally returned to the Philippines with Baby Dahlia after over a year in Australia.

The couple announced their homecoming to the public via their Instagram pages, much to the delight of fans and fellow celebrities alike as they welcomed them home.

In one of the clips, Curtis can be seen undergoing a swab test, while others showed Baby Dahlia having fun with the couple in her first time in the Philippines.

“Good Morning Philippines,” Curtis posted on Instagram earlier today, Feb. 11, sharing with fans a photo of her carrying her firstborn as she looks out the window.

Since December 2019, Curtis and Heussaff had been in Australia, where they welcomed their first baby in March last year.

Curtis, who hosted “It’s Showtime” back then, previously disclosed that she went to Australia to give birth as she wanted to take a break from work while also being with her mother, Carmen.

As Dahlia nears turning a year old on March 2, the couple set up a fundraiser with UNICEF Philippines to help disadvantaged and vulnerable children.  /ra