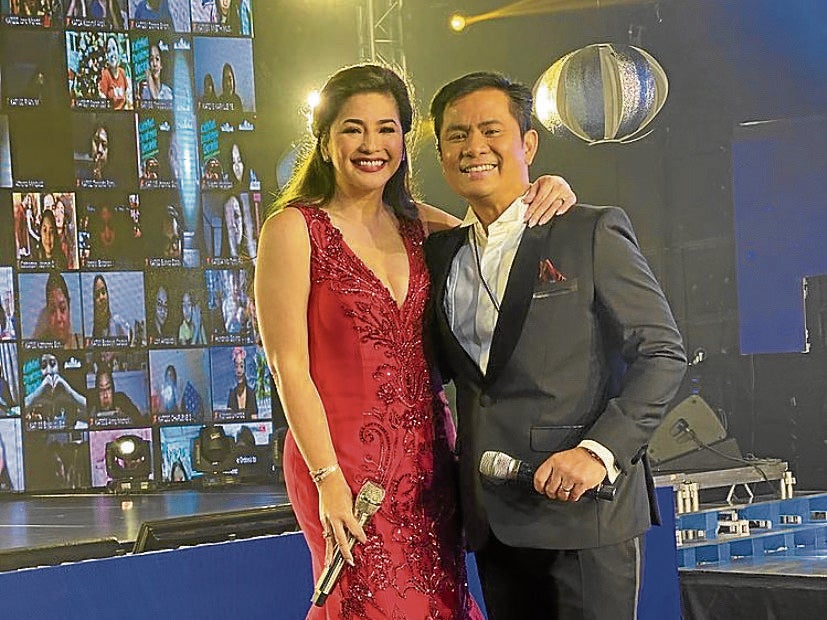 Like most, Regine Velasquez can’t really celebrate or go out on Valentine’s Day, because she’s the one often doing the serenading and entertaining couples on dates. But luckily, she can always count on her husband, Ogie Alcasid, to still make that day special.

“I work during Valentine’s Day every year. But in all fairness, lagi namang may paandar si koya! It could be a gift or a surprise dinner,” Regine told the Inquirer in a video conference for her digital concert, “Freedom,” on Feb. 14 on KTX.ph. “He would always surprise me with something.”

(The concert has been postponed due to Regine’s exposure to a COVID-19 positive person.)

Truth be told, Regine doesn’t want to get her hopes up too much, because of the COVID-19 pandemic.

“I’m looking forward to this year’s Valentine’s Day. However, I’m managing my expectations—it’s difficult to expect anything these days because of what we’re going through,” the music icon pointed out. “It’s tough to celebrate, too, knowing that others are having a hard time. But knowing him [Ogie], he will have something under his sleeve.”

Besides, it’s the little things that help spice up a marriage, Regine observed. Get used to grand displays and gestures, she said, and you lose the capacity to be surprised.

“As I was telling my fans, don’t always expect something big, so that, hopefully, we can continue surprising each other. It’s the same when it comes to marriage. You need those little surprises to make things work and make the relationship exciting,” she explained.

Regine and Ogie tied the knot in 2010, and had their son, Nate, the following year. But it seems like time hasn’t passed, Regine said, because the marriage is “bonggang-bongga pa rin.”

“We celebrated our 10th anniversary last year. And it makes me so happy that we made it to 10 years. It feels so long ago, but it also feels like it was just yesterday. My feelings are the same,” she gushed. “I love having him around. He’s still all that I need.”

And if anything, the past year has only made them stronger together. Yes, there will be misunderstandings sometimes, but that’s just normal, the singer stressed.

“It’s inevitable to have arguments along the way, especially amid the pandemic, because we’re all just stuck at home. We did have some disagreements, but that’s all part of the process. Actually your relationship will be tested in situations like these,” Regine said.

In a way, the situation allowed Regine to learn new things about Ogie and discover a different side to him.

“All couples all over the world were tested by the pandemic. But I’m happy that we were able to overcome the challenges with flying colors,” the 50-year-old recording artist said. “We’re still in a pandemic, but we will make it.”

But longtime couples can’t get complacent. They have to continue working on their relationship.

“When you get married, you and your partner become one; you need to put an effort to actually grow together. Changes will happen, but you need to stay aligned to stay in a wonderful relationship. Walang iwanan kumbaga,” Regine related, adding that honesty and communication are key.

And humor, too. It makes a whole world of difference to have someone who can make you laugh, especially these days, Regine said. “You have to spend time together, talking and just being honest with one another. You have to tell each other exactly how you feel.”