Jane Fonda to get lifetime award at Golden Globes 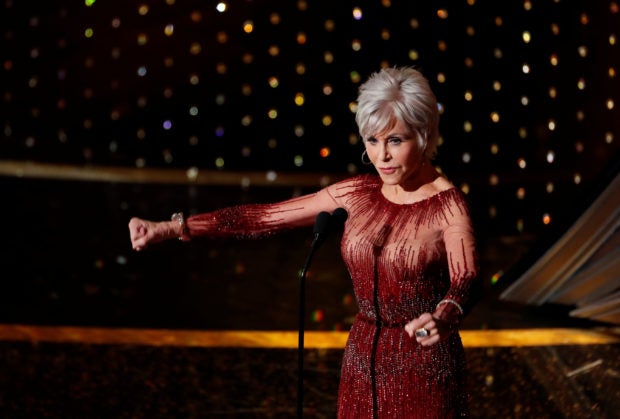 LOS ANGELES — American actor and activist Jane Fonda will get a lifetime achievement award at the Golden Globes ceremony next month, marking a career in film, television and at the forefront of social issues over some 60 years.

The Hollywood Foreign Press Association (HFPA), which organizes the Golden Globes, said on Tuesday that Fonda would receive its Cecil B. deMille award at the Feb. 28 ceremony.

“Her undeniable talent has gained her the highest level of recognition, and while her professional life has taken many turns, her unwavering commitment to evoking change has remained,” HFPA president Ali Sar said in a statement.

Fonda, 83, made her professional debut in 1960 on Broadway and on screen and went on to become one of the biggest movie stars of the 1960s and 1970s with films like “Barbarella” and “Klute” and later “On Golden Pond” and “9 to 5.” Her most recent appearances have been in the Netflix comedy series “Grace and Frankie.”

She also developed a voice as a political activist, campaigning against the Vietnam War in the 1970s, against the Iraq War in 2003, and in the past year holding weekly protests highlighting the dangers of global warming.

Read Next
Why Eva Noblezada started ‘crying, shaking’ the first time she met Lea Salonga
EDITORS' PICK
Every Filipino home can now be a smart home with realme TechLife
PLDT Home Prepaid WiFi customers now under the care of Smart
Nestlé Philippines’ ‘NESCAFÉ Plan’ bags Grand Anvil at PRSP 56th Anvil Awards
Wesley So officially a US citizen
‘Pilgrim of peace’ Pope Francis heads to war-scarred Iraq
WHO: Arrival of vaccines in PH ‘a powerful step’ towards economic recovery, normalcy
MOST READ
Kris Aquino dispels rumors on son Josh getting married, thanks Ogie Diaz for defending him
Wesley So officially a US citizen
Ginebra trades Slaughter to NorthPort for Standhardinger
LTO’s P500-M deal for screws draws scrutiny
Don't miss out on the latest news and information.