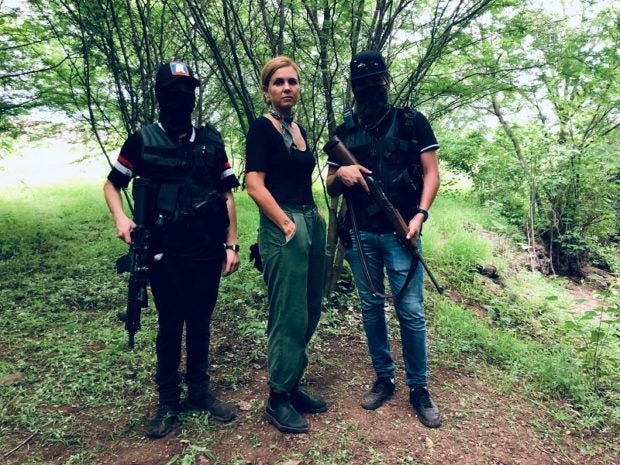 When people turn a blind eye, black markets flourish. That, for the most part, is the overarching theme characterizing each episode of Peabody-­winning investigative journalist Mariana van Zeller’s eight-part documentary “Trafficked,” which begins its run on Friday at 10 p.m. on National Geographic.

Nope, these aren’t just third-person accounts of crime-related cautionary tales. In fact, the eight-part series follows the pretty 44-year-old Portuguese journalist as she goes off the deep end to take viewers inside the most dangerous black markets on the planet.

Along the way, Mariana manages to lift the tight lid on the complex inner workings of smuggling networks involved in—hold your breath—sex trafficking, gunrunning, cocaine, fentanyl, steroids and other performance-enhancing drugs, fake money, lottery and investment scams and the systematic trafficking of endangered big cats.

Yes, she even crossed paths with the fascinating likes of Carole Baskin, Doc Bhagavan Antle and a surprisingly remorseful Joe Exotic long before their shared stories had captured viewers’ imagination in “Tiger King.”

How does she infiltrate these crime rings? “I don’t really take no for an answer. Giving up isn’t an option,” Mariana shares in a voice-over for the “Steroids” episode.” In the “Counterfeit Mo­ney” episode, she says, “You’d be surprised how many doors flattery can open.”

She never stops asking questions. In fact, during our recent one-on-one interview with her for this article, Mariana once asked us, “Did I really say that?”

It’s this persistence and attention to detail that have taken Mariana’s career to greater heights. But you only need to revisit her beginnings as a journalist to understand her gimlet-eyed focus and drive.

After college in Lisbon, she reportedly applied for a Master’s degree at Columbia University Graduate School of Journalism three times. But her first application was rejected, and her second was wait-listed. So, for her third application, in 2001, she flew to New York City, knocked on the dean’s door—and the rest is history.

Snippets from the binge-­worthy docuseries: In “Pimps,” Mariana demystifies the allure of prostitution and pimping as she talks to a nurse who moonlights as a hooker after her shift (“Sex is a renewable product that never expires”).

In “Scams,” she flies to Jamaica and Israel and goes undercover to expose the multibillion-dollar industries of investment and lottery scamming that victimize lonely and gullible retirees.

In “Tigers,” we watch how majestic beasts are bred to domestication and later sold to live under deplorable conditions in animal farms in Samut Prakan in Thailand, Laos and Myanmar.

In “Cocaine,” Mariana hikes with backpacking, drug-peddling muchileros—the so-called sherpas of the cocaine world—in the VRAEM valley of Peru after watching them turn 400-kilogram coca leaves into a kilogram of cocaine.

In “Guns,” she muses about “violence as a source of power” when she asks sicarios (hired killers) employed by Mexico’s Sinaloa Cartel to describe what they felt the first time they killed somebody.

In “Steroids,” Mariana tags along fitness influencer Dr. Tony Huge (he’s a lawyer, not a doctor) as he helps a Mr. Olympia contestant shed off his body fat from 21 percent to 5 percent in just nine weeks, with the help of a cocktail of performance-enhancing anabolic steroids.

In “Counterfeit Money,” we learn that 60 percent of all fake US bills are from Peru. And in “Fentanyl,” she goes deep inside the production pipeline and watches how 10 barrels of fentanyl are thrown out to sea as they’re being trafficked—in plain sight!

Asked where her fearlessness is coming from, Mariana was quick to answer, “It’s part of my DNA as a Portuguese. Like many of my ancestors, there’s that need to discover the world—exploration is in my blood. I truly believe the importance of shining the light on the dark corners of our world.

“And if we’re trying to address the root causes of black markets, or that of inequality and poverty around the world, the only way we can do that is with knowledge.”

Our Q&A with Mariana:

Which of the episodes did you feel most endangered your life?

There were different situations in different episodes that led to tricky and uncomfortable moments. There was a time while we were filming that illegal cocaine lab when we were told that we’d been spotted by the locals and that they were going to harm us if they found out that we were filming.

I saw how nervous the people we were with were and how they started running up the hill while we were carrying kilos and kilos of gear. So, definitely, that was one of those moments where things could have gone south really fast—and we were scared.

There was also that moment when we were filming with the “sicarios” in Mexico. The gunman told us, “While you’re with us, you’re protected, but if the Marines show up, there’s nothing we can do—and you just might end up getting caught in the middle.”

A few hours later, the Marines did show up and, again, it was a mad rush to get to a car. But then, I had to make the decision: Do we go with them and risk looking suspicious, or do we stay behind and hide and look even more suspicious? It was a really uncomfortable moment in which I felt the enormous responsibility, not only for my safety but, most importantly, for the safety of my crew.

It also got hairy when you went to Jamaica for the scamming episode and one of the bosses said, “You know, I planned to rough you up, but you’re so nice…” Didn’t that scare you?

Not looking scared is actually the best protection that we can have. If you show up to these places looking nervous, suspicious or like you don’t trust them, then they’re going to treat you the same way. So being calm, being open, or treating people with a lot of respect goes a long way.

What was the longest preparation spent for a particular subject? Because it felt like it took you forever to get access to some of them.

That’s for sure. I would say, I’ve been covering the opiate crisis during the opioid epidemic here in the United States for over 12 years. I’ve reported on everything, from oxycontin to heroin to fentanyl, so a lot of the reporting we did for that fentanyl episode was based on contacts and sources that I’ve had for years and years. And that’s partly why it’s one of my favorite episodes—and I hope it turns out to be one of the most impactful ones, as well.

Regardless of whether you’re male or female, you have breached borders in investigative journalism. Would you have had the same success if you were male?

But I’d say that being a woman, we’re seen as less threatening. It’s easier for us to appear “more disarming.” Also, in general, we approach the world with more empathy than men do. And for this kind of reporting, that is incredibly important. It was probably the only way for us to gain access into these impenetrable worlds.

I’ve read somewhere that Sean Penn outscooped you for an exclusive with Mexican drug lord El Chapo. How close did you get to that story? A couple of years ago in New York, I’ve spoken to Mexican actress Kate del Castillo, who helped Sean arrange that interview.

We went to his mother’s house and knocked on the door. We traveled for two or three days on rough roads to get to the little town where he was from, because we heard a rumor that he was hiding somewhere around there. And, then when he was caught, it wasn’t very far away from there.

We were definitely in the right region of Mexico. So I think we were close to where Sean Penn ultimately went with Kate del Castillo to meet him. So, yeah, it’s either a badge of honor or an enormous frustration that I was “outscooped” by Sean Penn for that story (laughs).

I hardly see you get emotional. But in the desaparecidos portion of the “Guns” episode, where grieving mothers later recover 78 missing bodies, you couldn’t help but shed a tear to commiserate with the mother of a desaparecido, Josimar. How do you keep your emotions in check?

I think controlling the emotions is not what I should be doing. I don’t like controlling them; I actually like expressing them, particularly when you’re connecting with people.

There are similar moments in the cocaine episode when I was talking to the muchileros, the backpackers. It’s not very hard to put myself in their shoes. In the case of Josimar’s mom, I’m a mother as well, so it was impossible not to get emotional when you hear her story.

Showing emotion is the best way to help our audience connect with these people—and that’s a huge goal of mine for this series. It isn’t enough to present the world as a sad, dangerous and depressing place.

Most importantly, I also want people to see that this complicated world is, in fact, very beautiful and inspirational. If we can find connections with and redeemable qualities from people in these parts of society, then we stand a chance of building a better world.