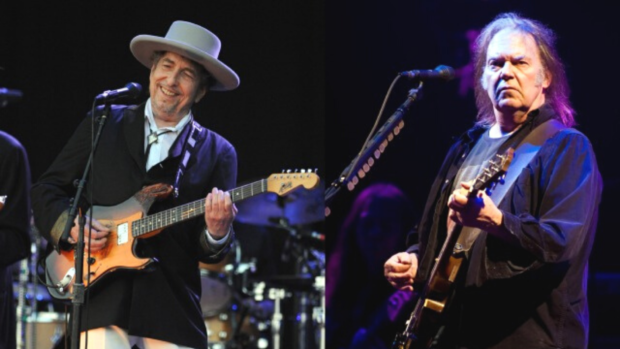 Bob Dylan (L) and Neil Young (R) are among the musicians who have recently sold the rights to their song catalogs. Image: AFP/Fred Tanneau, Leon Neal

Deprived of revenues from their world tours, songwriters are increasingly selling their song catalogs to companies such as Universal Music Publishing Group and Hipgnosis Songs Fund. These transactions are part of a growing trend in an industry that Goldman Sachs estimates will be worth $131 billion by 2030.

The latest acquisition to date is Neil Young’s prestigious catalog of 1,180 songs. The investment group Hipgnosis Songs Fund acquired half of his catalog rights. Although the company led by Merck Mercuriadis has not disclosed the amount of the transaction, it is reported to be $150 million according to several sources. Quite a substantial sum to acquire the economic rights to one of the most prestigious repertoires of rock music, which includes pieces such as “Heart Of Gold,” “Harvest Moon,” “Rocking In The Free World” and “Devil’s Sidewalk.”

Mercuriadis, who was Beyoncé and Elton John’s manager before creating Hipgnosis, is a big fan of Young’s. “I bought my first Neil Young album aged seven. ‘Harvest’ was my companion and I know every note, every word, every pause and silence intimately. Neil Young, or at least his music, has been my friend and constant ever since,” he said in a press release.

Hipgnosis’s latest acquisitions show that Mercuriadis also appreciates other artists as well as the Canadian rocker. Lindsey Buckingham, Debbie Harry, Nile Rodgers, Chrissie Hynde… These Rock and Roll Hall of Fame icons have all recently sold the rights to their song catalog to the publicly traded investment company. And they are not the only ones.

Bob Dylan made headlines last December when Universal Music announced that it was buying the rights to his entire repertoire for an estimated $300 to 400 million. Universal Music Publishing Group will now manage over 600 songs written and composed by the iconoclastic 79-year-old musician.

Formerly strongly discouraged, selling one’s song catalog has become an option that is increasingly seducing aging songwriters who prefer to take immediate advantage of their heritage rather than manage its commercial use in movies, TV series, commercials, video games.

“They need to manage their finances, especially since they don’t know when they will be able to resume touring to generate cash because of the health crisis. I propose to help them to monetize their assets while associating them and respecting their artistic aspirations,” Mercuriadis told French newspaper Les Échos.

And it seems to have paid off so far. In recent years, the value of song repertoires has risen sharply under the impetus of music streaming platforms, and their ability to offer a second youth to songs from the 70s or 80s.

“With the advent of Spotify, 30 million records woke up and got a new life,” Amy Thomson, chief catalog officer at Hipgnosis, told The Financial Times. For instance, the ballad “Dreams” by the group Fleetwood Mac, has recently accumulated millions of listens thanks to a viral video on TikTok. With such boosts in popularity, the band’s vocalist, Stevie Nicks, jumped at the opportunity to sell the majority of her catalog to Primary Wave Music.

As tempting as they may be, these transactions are not necessarily a risk-free investment since they rely on the continued growth of the music industry and the ability of songs like Blondie’s “Heart of Glass” and Bob Dylan’s “Forever Young” to generate ever-increasing revenues. In any case, Dolly Parton and David Crosby have already announced that they are considering selling their repertoire. Let the bidding begin! RGA