One night with Morrissey for ’80s New Wave kids 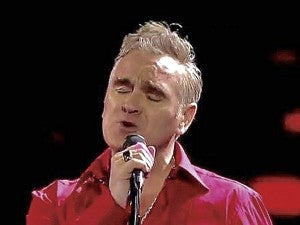 MORRISSEY at the Festival Viña del Mar in Chile in Feb. 2012. VIDEOGRAB

Morrissey is 52. His famous quiff is graying and he has gained weight. No matter, he’s still one of the most influential figures in alt-rock even as his famous band, The Smiths, has long broken up.

He’ll be here on Sunday for a one-night show at the World Trade Center in Pasay City. It’s got local New Wave kids of the ’80s all fired up.

Any memorable experience so far on your current world tour?

Every hour and everything is fascinating—most of all, I suppose, having police escorts around Peru, Chile and Brazil. Friendly escorts. It’s insane to be guided through the streets with police… waving traffic out of the way so you can pass. I kept wondering if that was actually happening.

You continue to be outspoken about many issues, like animal rights and politics. Any statement you regret?

Whatever I said, I meant. I am not outspoken; it’s just that the British press makes such a silly fuss about anyone who expresses an opinion that isn’t conservative. Yes, I believe the British so-called royals are a cunning dictatorship, and the fact that you cannot say such a thing in modern Britain proves that. Everyone I know wishes the British so-called royals would just go away. Instead, British people are beaten over the head by the royals every single day … how wonderful they are, how essential, how dazzling, how clever, how heroic …. things that we are told but that we never see for ourselves. No one can think of anything inspiring that the queen has ever said, though she’s allowed the British people to call her queen for 60 years.

Who are some current artists/musicians that inspire you?

Are there any covers of your songs (as part of The Smiths or as Morrissey) that you like or dislike?

There are a few solo singles that embarrass me, and I never liked “What Difference Does It Make?” by The Smiths. Over 30 years, there’s bound to be a few stinkers.

Having a career that spans four decades, what is the biggest challenge you’ve experienced as an artist?

I’ve had a lot of bad press in England. It doesn’t seem to happen to anyone else. I also realize I’ll never have a No. 1 single. Yet it happens so many times with songs that are appalling. I expect it’s all about pitching and whoever you have in the label that is determined to make it happen for you.

How do you keep your old fans and gain new ones?

I have absolutely no idea. I don’t know how people hear about me. I’m never on the radio, and I’m rarely on the television. The songs just seem to seep through against a million barriers.

What keeps your music fresh?

I think it remains … as you say … “fresh” because it isn’t promoted. It isn’t rammed down people’s throats. It remains a secret. A very large one, but a secret nonetheless.

Is there anything else you want to accomplish?

I’d like to do three more albums, then star in a French film directed by Guillaume Canet.  Then I’d like to have my own television show in mid-sentence.

It’s your first time in Manila, what can Filipino fans look forward to?

They can look forward to walking out of the concert hall seven inches taller than when they went in.