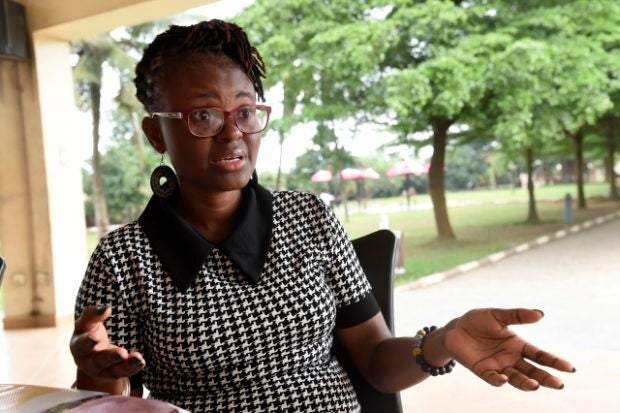 On screen, Oloture is the hero of a Netflix drama, a journalist who infiltrates a prostitution ring, but in real life, Tobore, who inspired the film, is the shadow of her former self. Image: AFP/PIUS UTOMI EKPEI.

Clad soberly in a checkered knee-length dress, Tobore Ovuorie hardly seems as if she once walked the streets of Lagos in a revealing outfit and high heels.

A freelance reporter with a burning desire to uncover the truth about a sordid backstreet trade, Ovuorie dressed as a streetwalker to infiltrate a prostitution ring.

She took on the dangerous mission after a friend left for Europe, became a sex worker and died, leaving Ovuorie shocked and beset with questions.

Today, Ovuorie’s remarkable story has been turned into a hit Netflix film, “Oloture,” which has shone a bright light on one of Nigeria’s darkest trades.

“I needed to do justice, to know the truth. I wanted to know the process, the back story about these ladies,” the 39-year-old reporter told AFP.

By dressing up, she sought to gain the prostitutes’ trust, the first step to introducing her to a “madam” — a pimp.

After eight months working undercover in 2013, Tobore Ovuorie emerged with a terrifying account about the victims of sex trafficking.

She published her story in 2014 in the Nigerian newspaper Premium Times and Dutch investigative magazine Zam Chronicles, inspiring a production company in Nigeria to adapt it for the screen.

Released in October on Netflix, the story has been widely watched and applauded in its home country, Africa’s most populous market.

But in this case, the reporter was also “the torch that led us into the lives” of victims, he said.

Sex trafficking is rife in Nigeria, in particular in southern Benin City, a recruiting ground for criminal gangs who smuggle women to Europe.

How many are trafficked is unknown but in Italy, authorities say that between 10,000 and 30,000 Nigerians are prostitutes.

Several thousand others are stuck in Libya or other African countries, often exploited by criminals who make them believe they will one day reach Europe.

In the film, a journalist named Oloture, playing the part of Ovuorie during her investigation, heads to neighboring Benin with a dozen other girls.

Instead of heading to the border, their minibus stops in a gloomy training camp on the outskirts of Lagos.

There, the girls are roughed up and divided into two groups: “street” prostitutes and “special” prostitutes reserved for wealthier clients.

On screen, the most gripping character is Linda, a young uneducated woman from a poor rural background, who becomes friends with Oloture.

Linda “represents many of those young ladies and how they get in disillusion” said Ovuorie, who came across such a character during her investigation.

For the director, it is exciting that the film is a success in Nigeria.

“We have to see how to make this film available in remote places for young vulnerable women who might be susceptible to be trafficked to Europe,” said Gyang.

On social media, the movie — and its ending — have triggered passionate debate.

“For most of these ladies there is never any light at the end of the tunnel,” said Gyang, “So why would you try to make a film that would end on a happy note?”

Ovuorie said that what she saw and experienced during her investigation still haunts her — she is trying to find the women she was meant to go to Europe with, and tell their stories.

Her work has inflicted a heavy emotional cost, she said.

“I’m a shadow of myself, I try to smile, to look bright, but most of the time it’s been just me fighting to hold onto life.” CC

WATCH: Julia Montes deals with virus outbreak at its worst in ’24/7′ trailer