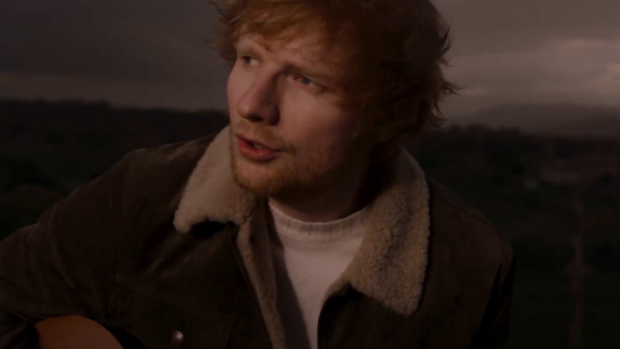 The singer announced the track on his Instagram page alongside a short clip of him performing it with an acoustic guitar.

“Hey guys. Afterglow is a song I wrote last year that I wanted to release for you,” he said.

“It’s not the first single from the next album, it’s just a song I love, and hope you love too. Enjoy! Have a safe and happy festive break and New Year’s,” Sheeran added. “Back to dad land for me now, ciao x.”

The 29-year-old artist also released the live performance music video on his YouTube page. The simple production shows Sheeran outdoors under a dark sky, singing, “We were love drunk waiting on a miracle / Trying to find ourselves in the winter snow.”

“So alone in love like the world had disappeared / Oh I won’t be silent and I won’t let go,” he continues. “I will hold on tighter ‘til the afterglow / And we’ll burn so bright ‘til the darkness softly clears.”

“Afterglow” is the first tune Sheeran has released since he dropped his fourth studio album, “No. 6 Collaborations Project,” in July last year. It was in the same month that he confirmed his marriage to his childhood sweetheart, Cherry Seaborn.

Though Sheeran has been keeping a low profile on social media lately, he proudly revealed the birth of their first child, a daughter named Lyra Antarctica Seaborn Sheeran, last September.

“We are completely in love with her. Both mum and baby are doing amazing and we are on cloud nine over here,” the singer expressed at the time. “We hope that you can respect our privacy at this time.”  /ra