Pia Wurtzbach hailed ‘Woman of the Year’ by luxury magazine, defends self from bashers 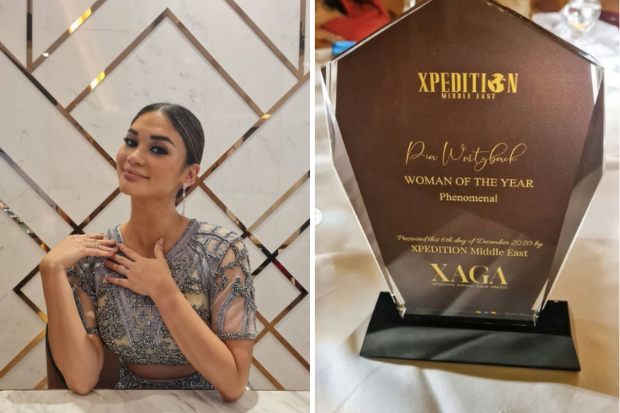 Miss Universe 2015 Pia Wurtzbach could not help but stand up for herself after being bashed over her “Woman of the Year” recognition from Dubai-based luxury magazine Xpedition.

While she is grateful for the award, the beauty queen revealed that some people have been telling her that she does not deserve such a title, telling her, “Wala ka namang ginagawa (you haven’t done anything).”

“Thank you so much @xpeditionmagazine @josh_yugen @yugenpr for the invitation and the award. 15 awards were given out tonight and I’m so grateful to receive one of them. Thank you for recognizing my efforts,” Wurtzbach posted on Instagram yesterday, Dec. 7.

“I noticed a few bashers questioning why I was given this award, also saying that I dont deserve it.. I usually [don’t] like answering them but I have to admit, nahuhurt ako pag sinasabing ‘wala ka namang ginawa’ (I get hurt when I am told that “you haven’t done anything”). So let me explain,” she added.

In the comments section, Wurtzbach shared that she has indeed done something amid the global pandemic, pointing out that she conducted her own fundraiser for the first time this 2020, among many other things.

“After the success of my very first fundraiser I gained the confidence to do more. So then when Vestido and Aquafina asked me to donate gowns I wore as [Miss Universe], I said yes! Gowns and shoes were auctioned off all for charity,” Wurztbach said.

“A few months later I was asked by WWF to join their team and I was so happy to be a part of it and learn more, also because Jeremy [Jauncey] who is a global ambassador to WWF, has been teaching me so much about it. Now because of safety reasons, I haven’t done any [on-ground] work yet but I helped with their fundraisers and [since] I joined their team we closed [three] campaigns,” she added.

Wurtzbach disclosed that these campaigns were able to generate around P300,000 to P400,000 each. She also shared that she auctioned off her watches to Anne Curtis and Angel Locsin’s fundraiser, while also conducting free talks with UNAIDS every three months.

“Earlier this year when the pandemic started I did my very first fundraiser. Usually, I just join other fundraisers but this time I started my own. Literally me handling the monetary donations myself, without an org to work with,” she said in the following comment.

“And keeping it all transparent para sure na lahat talaga madodonate (that everything will be donated). I was able to collect over 1 million pesos. I used the money to donate PPEs to hospitals earlier this year when they were harder to get by. I also donated money to the fundraiser myself,” the beauty queen added.

Wurtzbach stressed that only her cousin, friend and driver helped her with the deliveries, noting that she does not have a big team or staff.

“Around the same time I also partnered with a local restaurant to [continuously] deliver lunch and dinner to the UCI unit Makati Med for weeks and that was with my own money,” she added. 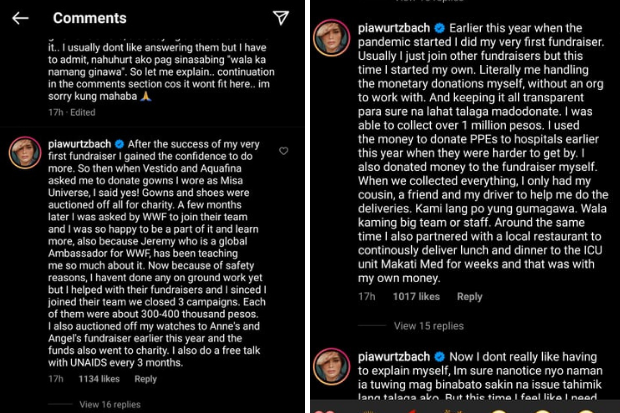 “Now I [don’t] really like having to explain myself, [I’m] sure nanotice nyo naman [na tuwing may] binabato saking issue tahimik lang talaga ako (you noticed that I always remain silent when an issue is thrown at me),” she stressed in another comment. “But this time I feel like I need to say something.”

Wurtzbach noted that while she posts about her efforts, people only tend to notice her “glam pics” and her photos with Jauncey.

“This year has been tough for me too. [I’ve] been trying to keep my head up and balance work and businesses, my personal life and even family issues,” she said. “I’ve been through some really dark times tihs year (even Jeremy has seen it) but somehow [I’ve] been able to fight through it and I [haven’t] forgotten the people who believe in me.”

She then told bashers that while they may not like her, she is doing okay as there are people and organizations who still believe in her and “that’s all that matters.” 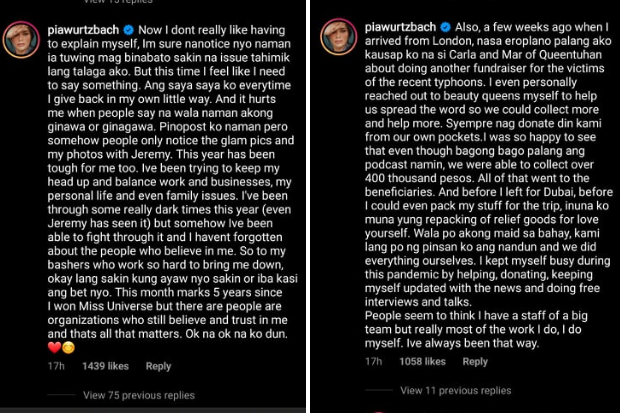 Wurtzbach also revealed that last week she planned doing a fundraiser again for victims of the recent typhoons. She has also reached out to fellow beauty queens to help with the relief effort, noting that they have raised around P400,000.

Before she went to Dubai for the said recognition, Wurtzbach also shared that she packed relief goods first with her cousin.

“I kept myself busy during this pandemic by helping, donating, keeping myself updated with the news and doing free interviews and talks. People seem to think I have a staff of a team but really most of the work I do, I do myself. [I’ve] always been that way,” she added.  /ra