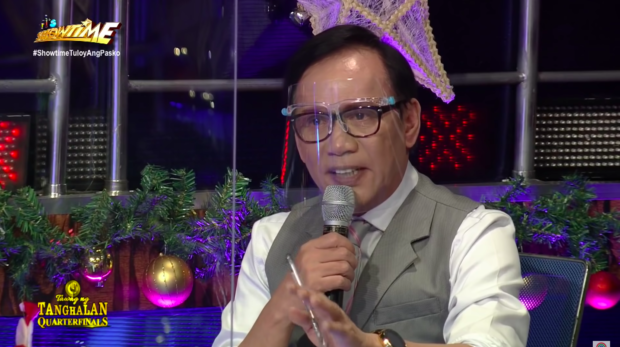 Rey Valera let out his sentiments about the country in Tawag ng Tanghalan. Image: screengrab via YouTube/ABS-CBN News

As a judge in singing contest Tawag ng Tanghalan, OPM legend Rey Valera did his best to contain his emotions, but he could not hide his sadness after one of his songs was performed onstage.

Wincel Mae Portugal-Maglanque, who hails from Batangas, gave a heartfelt rendition of “Malayo Pa ang Umaga” during the contest’s quarterfinals which aired yesterday, Dec. 5 on “It’s Showtime.” She was an OFW working as a singer in Macau but lost her job after singers and musicians were let go from her workplace.

(I was close to tears a while ago. I pity the Philippines. It is as if I feel our sufferings even more.)

He noted how going abroad and comparing the life others have with those of Filipinos breaks his heart.

(When we go abroad, we see tattered roofs. When you go to another country, it is so orderly.)

(Then you feel sorry for the Philippines. Then you see all that is happening to us. Then this [shutdown] had to happen to ABS-CBN. In my own way, I want to give support as much as I can.)

Valera, dubbed the “King of Tagalog Songs,” has countless hits under his belt including “Pangako Sa ‘Yo” and “Kahit Maputi Na ang Buhok Ko.”

After her moving performance, Portugal-Maglanque moved on to the semifinals, along with contestants Almira Lat and JM Yosures. JB