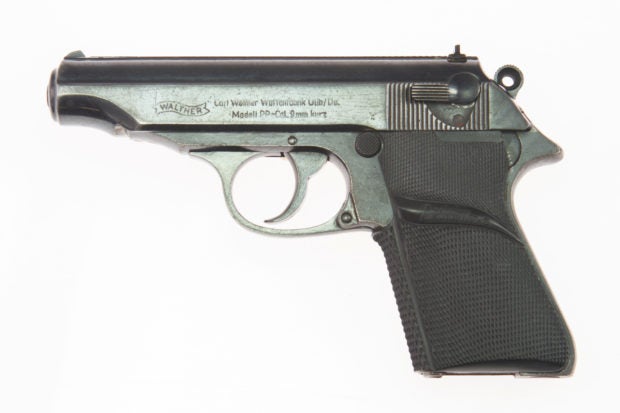 FILE PHOTO: A semi-automatic Walther PP gun used by the late actor Sean Connery in the 1962 film “Dr. No” is seen in an undated photo before an auction in Beverly Hills, California, U.S. Courtesy of Julien’s Auction/Handout via Reuters

LOS ANGELES — A handgun used by the late Sean Connery in the first James Bond film sold for $256,000 at auction in Beverly Hills on Thursday, topping earlier estimates for the piece of Hollywood history, Julien’s Auctions said.

The deactivated semi-automatic Walther PP pistol, which along with its smaller model the PPK became one of the film franchise’s best-known images, was used by Connery in the movie “Dr. No” in 1962.

Connery, the first James Bond in the franchise, died on Oct. 31 at the age of 90.

Julien’s said the winning bidder, who asked to remain anonymous, was an American who had seen every James Bond movie with his or her children. The auction house had previously estimated that the gun would fetch between $150,000 and $200,000.

Read Next
Geneva Cruz defends LGBT, gay marriage: ‘We don’t choose who we are’
EDITORS' PICK
vivo brings to the Philippines a powerful smartphone with a slimmer body, the vivo Y02s for only PHP 6,499
Apple warns of flaw that lets hackers into iPhones, Macs
46% of schools nationwide to have full face-to-face classes on Aug. 22
House energy committee chair Arroyo bats for cheap electricity
What to watch out for when selecting a video surveillance solution
Heads may roll at BOC, says Palace if sugar smugglers are allowed to use recycled import permits
MOST READ
DepEd to give teachers P5K cash allowance within first week of classes
LOOK: Miel Pangilinan dazzles in glittery pre-debut shoot
DOJ indicts bank officer in $2.1 billion Wirecard fiasco
PH importing sugar after all: Marcos okays 150,000 MT
Don't miss out on the latest news and information.