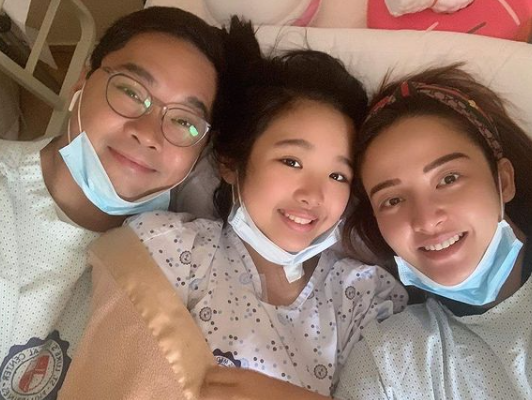 Renowned broadcaster Anthony Taberna opened up on his heartache after seeing his young daughter go bald as she undergoes chemotherapy for leukemia.

Taberna, who shared a photo of a smiling Zoey who had just gotten her head shaved, noted that he did not expect his daughter to allow him to post it in public.

(She is smiling but I knew her heart was breaking when her hair started falling off due to chemotherapy.)

(When Zoey agreed to have her head shaved and when I found out that my wife was on the way to the hospital with Ate Tet, I left for a while. I thought I was strong enough. It turns out that I was weak.)

(There is a video of Zoey having her head shaved. Every time I see that, I cannot stop my tears from falling. Having short or no hair is one of the reasons for Zoey’s insecurity.)

(But when I saw her post this, I asked for her permission to post it as well. I admire our eldest child’s courage. I love you, Zoey.)

Taberna also directed followers to read about Zoey’s account of her journey in battling leukemia, which she likewise posted on Instagram yesterday.

“[One] year ago today, [I] was rushed to the hospital at [2 a.m.] because [I] couldn’t walk and my legs were so painful. [We] had no idea what was happening to me,” Zoey recalled.

“[At] first, we thought [I] had a problem with my bones. but after running multiple tests, [I] was diagnosed with bone marrow disease, which ended up to be leukemia,” she added.

“[I] was very scared. [Just] the word ‘leukemia’ itself made me so afraid. [Especially] since [I] had to undergo chemotherapy. [I] needed to chop off all my hair. [And] that made me very insecure and sad all the time,” Zoey shared.

While she admitted that she thought her life “would already end there,” Zoey noted that she “stayed strong and did my best.”

Taberna shared that Zoey was 11 years old then when she was diagnosed with bone marrow disease, which they later found out was leukemia. NVG

Farmer moves to Manila to seek treatment for son with leukemia