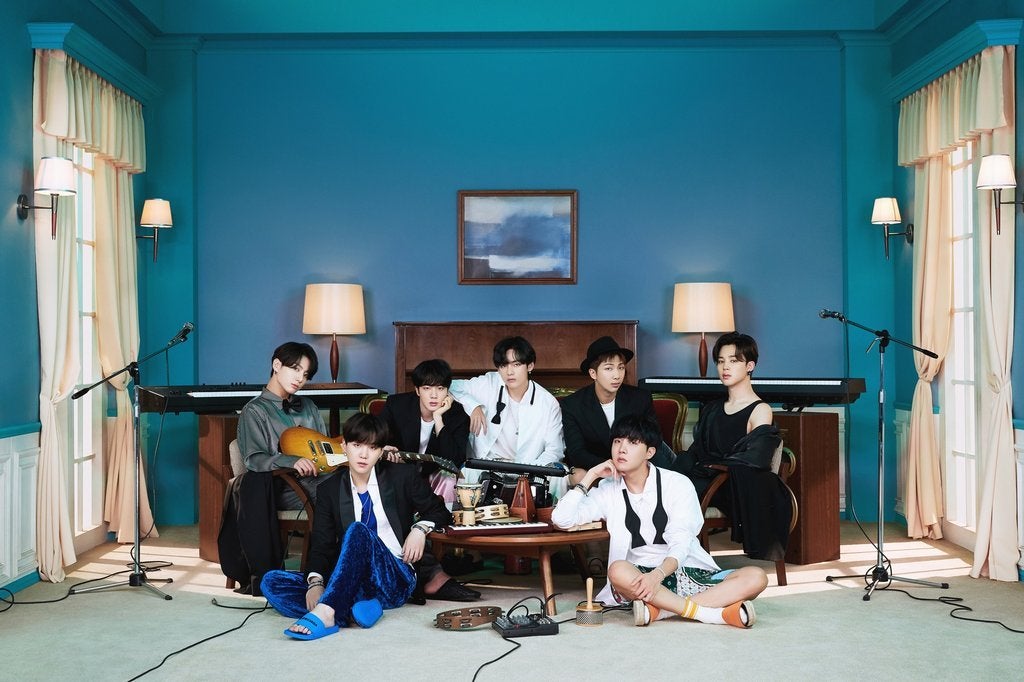 SEOUL — It was not the first time that sensational K-pop boy band BTS had seen its name at the top of US music publication Billboard’s main singles chart, but this time it was different.

Billboard on Monday announced via social media that “Life Goes On,” the lead track of the band’s latest album, “Be,” debuted at No. 1 on this week’s Hot 100, the coveted singles chart, becoming the first song sung predominantly in Korean to top the chart in its 62-year history. It also marked the first non-English song to debut in the top spot.

While the group has celebrated the milestone of topping the Billboard main chart earlier in September with their prereleased single “Dynamite,” the disco-pop song had been an all-English song and had sparked controversy as to whether it could actually be considered part of the K-pop genre.

“Many people had been wary even until now, saying ‘Dynamite’ became No. 1 as it is an all-English song, degrading BTS’ value as musicians,” Lee Gyu-tag, a cultural studies professor at George Mason University Korea, told The Korea Herald. “‘Life Goes On’ has proved that BTS could succeed without the exquisite strategies targeting the US music market.”

Lee explained that such a feat by “Life Goes On” is more significant, as it could hint at diversification in the global music industry.

“It’s a soft ballad song singing words of comfort to people worn out from the virus pandemic. Although it was unclear whether both the song and its message could succeed commercially, the members pushed through with voicing their honest thoughts in their own way, and this seemed to have won the hearts of many listeners,” Lee said.

“Just a decade before, K-pop songs were often considered exotic and even mocked. With the efforts of BTS and many other Korean artists, much of the wall has been torn down.”

Meanwhile, the eight-track set, released Nov. 20, debuted atop this week’s main albums chart, the Billboard 200, becoming the group’s fifth consecutive chart-topping album, spanning just 2 1/2 years. The band is the first act to achieve five No. 1 hits on the albums chart since British rock legends the Beatles in the 1960s. BTS is also the only act other than Taylor Swift to grab top placements on both the main singles and album charts in Billboard history.

The last track of the album, “Dynamite” climbed back up to No. 3 on the chart from No. 14 last week, remaining on the chart for 14 consecutive weeks. The band is the first act to debut multiple songs on Billboard’s main singles chart.

“We thank you so much. It’s grateful that we not only reached No. 1 but hold two songs in the top 3. We’re sincerely grateful to all the Army who love us,” BTS said on social media on Tuesday, reacting to Billboard’s announcement. “Army” refers to the band’s official fandom.

Pop culture critic Jung Min-jae said the feat achieved by “Life Goes On’” shows that BTS’ fandom has reached another milestone in the United States.

“While ‘Dynamite’ had enjoyed explosive US radio streams as an English song, ‘Life Goes On’ showed a disappointing number in terms of radio plays. And this proves that BTS now holds a fandom huge enough to guarantee them a No. 1 in the launch week just with digital streaming and downloads, as well as an enhanced reputation among the general public in the US,” Jung said.

“But this just proves BTS is at the pinnacle of stardom, as all pop culture has always revolved around such fandoms that make the stars, and in return, enforce their stardom even more. This has applied exactly the same to other global stars, such as Michael Jackson, Madonna and the Beatles. Stars only exist upon huge fandoms,” the critic added.

Jung explains that with popular K-pop idol groups such as BTS, the unique fandom culture in this digital age — which supports artists through aggressive streaming and advertising on social media — has amplified the power of stardom in the US, which was once considered too big a market to be targeted by a single fandom.

With the top US music charts now under the group’s belts, hopes are higher for BTS to also take down music’s top award — a Grammy — after the act became the first K-pop artists to earn a nomination.

Stating he had been predicting a win even ahead of Billboard announcements Monday, professor Lee said, “Based on BTS’ achievements and popularity this year, I would not be surprised to see them win — or rather — disappointed if they didn’t.”

Jung was more cautious in promising a win, stating a nod as a finalist is symbolic in itself.

“The nomination proves that this team has become a rightful part of their industry and that it is impossible to disregard them,” the critic said.

“While the Recording Academy (which presents the Grammys) has been making efforts to embrace more diversity in their members in recent years, this has not led to a significant difference in the results.”

At the 63rd Grammy Awards, slated for Jan. 31 in Los Angeles, BTS will vie in the category for best pop duo/group performance against stars including Lady Gaga, Taylor Swift and Dua Lipa.

Read Next
Netflix’s ‘Money Heist’ to get Korean remake
EDITORS' PICK
Metro Manila posts lowest temperature yet this ‘amihan’ season at 19°C
Acer starts the year off strong with the Aspire Vero National Geographic Edition
Over 3 Million worth of prizes to be won at Smart Padala’s SENDali Manalo Promo!
Gear up and get ready to play with Yamaha Mio Gear
DOH: 28,471 new COVID-19 cases in PH; active cases now 284,458
On Day 2 of implementation, gov’t says workers now exempt from ‘no vax, no ride’ policy
MOST READ
Derek Ramsay on being married to Ellen Adarna: ‘Gumaan ‘yung mundo ko’
Emma Stone calls Andrew Garfield a ‘jerk’ after he ‘lied’ about his ‘Spider-Man: No Way Home’ appearance
Lucky plants to grow in 2022
Retirements prompting major reshuffle in PH military
Don't miss out on the latest news and information.