Pacquiao OK with sons joining show biz, but says no to entering the ring | Inquirer Entertainment

Pacquiao OK with sons joining show biz, but says no to entering the ring 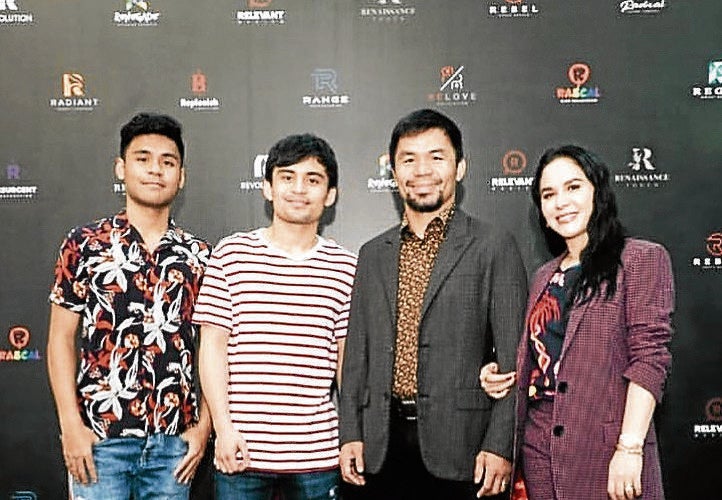 Sen. Manny Pacquiao has no problem with his two eldest sons, Jimuel and Michael, pursuing show biz. He and his wife, Jinkee, are actually supportive of it, he said.

“My firstborn, Jimuel, really wants to box … experience amateur competition. But if you will ask me, I don’t want him to. Boxing is a tough sport. I let him experience the rigorous training, so he can realize that it’s not easy,” he related in a video group interview, which introduced him as the newest endorser of the ubiquitous online multiplayer battle game “Mobile Legends: Bang Bang.”

Not only is boxing punishing, but also dangerous, he pointed out. And his fears aren’t unfounded. “It’s a serious sport that can get you killed … like what happened to my friend. It can happen and can’t be totally avoided,” said Pacquiao, who lost his close friend, Eugene Barutag, after a bout in 1995. They were only 16 then.

“Boxing is one of a kind. You have to be a true warrior in order to sustain yourself and fight in the ring. You don’t just go stepping into a fight. You need to have focus and make a lot of sacrifices. You need hard work and discipline—all these qualities,” he said. “I don’t want my children to experience that.”

Jimuel, 19, has expressed interest in acting and has been undergoing workshops. Michael, 18, is an aspiring rapper and has already put out his first album. And this early, the two are already getting a taste of public scrutiny that goes with being in the limelight.

Jimuel’s relationship with ex-girlfriend, actress Heaven Peralejo, was fodder for tabloid gossip. And though Michael’s Wish 107.5 Bus performance of his song “Hate” drew raves and 13 million views on YouTube, it also attracted critics, who think that he only benefits from his father’s name. They have to be ready for these, Pacquiao said. “Michael isn’t used to that. There are bashers and sometimes he can’t handle it; he gets sad about it,” he said of his second child.

You can’t please everyone. That’s one of the pieces of advice he gives his children. “I just make them understand that not everyone in social media will be supportive. Some will bash them. And I tell them to be understanding,” he said. “This has happened to me, from the beginning of my career until now… I try to draw inspiration from that.”

Pacquiao has three other kids: daughters Princess, 14, and Queenie, 11; and son Israel, 6. And while his children’s lives can never be more different from the life of poverty he and Jinkee led growing up, Pacquiao makes it a point to show them where their parents came from.

“We teach them household chores. We had them study in General Santos City (his hometown) for two years, so they could realize that life isn’t just about comfort and luxury, which they enjoy now. I want them to know the kind of life we had so that they grow up humble and helpful to others,” he said. “Thankfully, God is good, and the children are kind and respectful.”

Meanwhile, Pacquiao said he accepted the role as “Mobile Legends” ambassador mostly because of his kids. “I already know of the game even before they got in touch, because Jimuel plays the game on his phone, and regularly streams with friends. So, why not be a part of what my son loves?” he said.

He’s not that strict with his children when it comes to gaming, but they should be able to manage their time responsibly, stressed Pacquiao. “They just have to be responsible, and make time for themselves, their family and their studies.”