‘Virus Hunters’ out to prevent the next contagion | Inquirer Entertainment

‘Virus Hunters’ out to prevent the next contagion

Dr. Kendra Phelps on cases of mind-boggling COVID-19 reinfection and speculation that it was ‘manufactured’ in a lab in China
By: Rito P. Asilo - Entertainment Editor
Philippine Daily Inquirer / 12:15 AM November 28, 2020 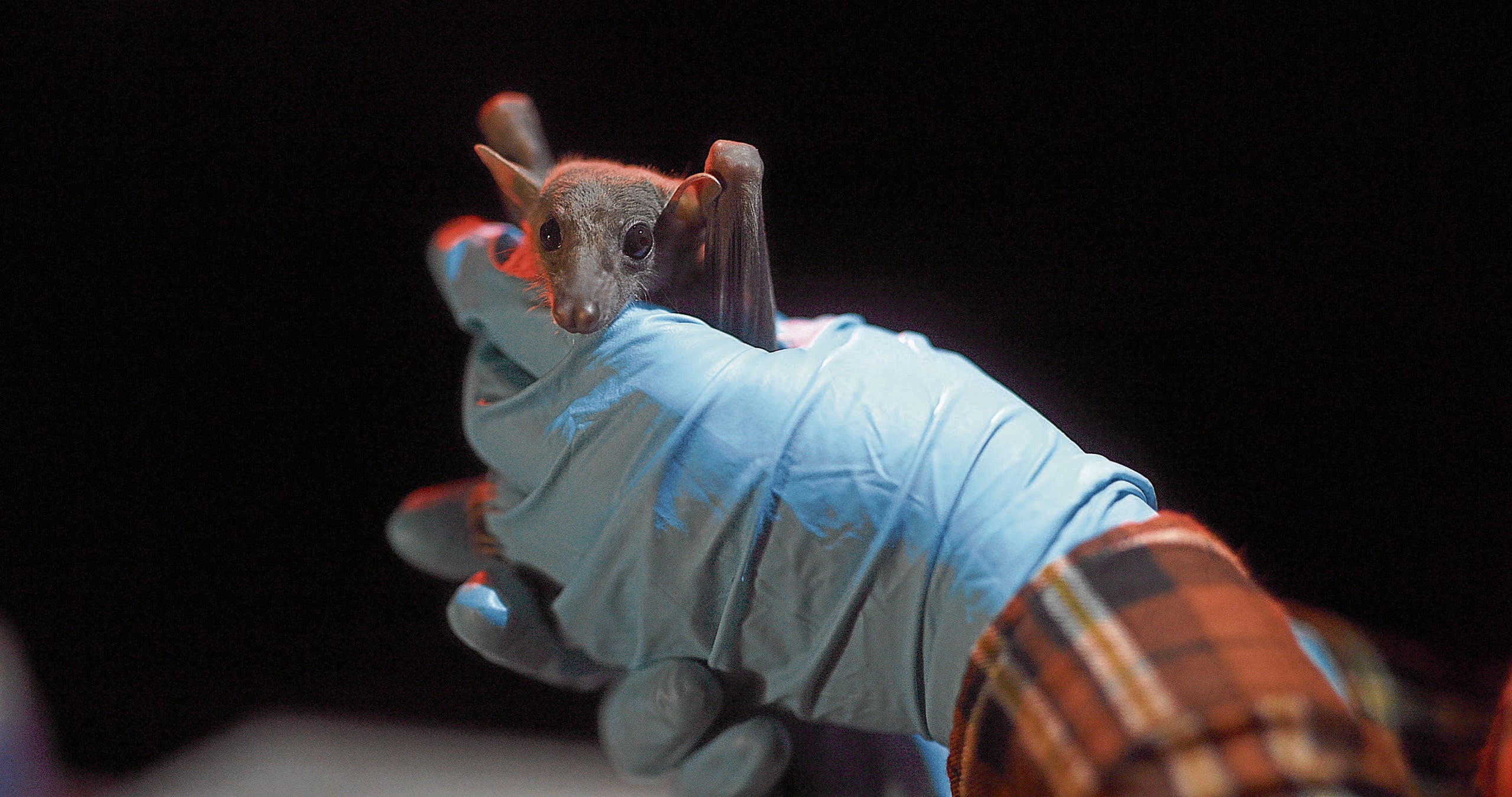 A bat being tested for viruses

You can throw your fear-driven conjecture about the deadly COVID-19 disease just by talking to Dr. Kendra Phelps.

Thanks to the upcoming documentary “Virus Hunters,” which premieres on Dec. 3 at 9 p.m. on National Geographic, I recently had a most enlightening Zoom chat with the pretty bat surveillance specialist about zoonotic viruses (those that jump from animals to humans), bats (one of her fields of expertise) and the Philippines as a potential hotspot for another disease outbreak.

To get the “elephant in the room” out of the way, I asked Kendra about the conspiracy theory being floated around that the coronavirus was developed in a laboratory in China. Is there a way to know if a virus could have resulted from environmental or laboratory manipulation based on virulence or symptomatology?

“I can guarantee it’s not man-made or lab-based,” Dr. Kendra pointed out. “We collaborate with the Wuhan Institute of Virology, so I can assure you with all of my spirit that it wasn’t created in a lab. While slightly different, these are RNA viruses.

“The virus that causes COVID-19 is called SARS-CoV-2. If that tells you anything right there, it’s very closely related to what we already know about SARS and similar to previous viruses that have infected humans.

“We know that SARS originated in bats, transmitted to humans through live animal markets—not directly from bats, but from catching and containing them at markets with other species, which then got the virus and transferred it to the human who purchased it for consumption.

“But there may have been an intermediate host, probably a pangolin—which is the most trafficked animal on the planet. The Philippines has its own endemic pangolin, which there aren’t many left unfortunately. We’re still trying to find out more about it.”

To bring myself up to speed for my chat with Dr. Kendra, I looked up EcoHealth Alliance, the NGO (nongovernment organization) she’s affiliated with that is focused on research aiming to prevent pandemics and promote conservation in hotspot regions worldwide. Then, I sat through a trio of NatGeo documentaries, which shine the spotlight on efforts carried out by researchers racing against time to prevent another contagion.

Other than “Virus Hunters,” which features Dr. Kendra explaining her work in a bat-filled cave in Turkey to Dr. Christopher Golden and ABC news correspondent James Longman, I also watched “Breakthrough Virus Hunters” (shown last Nov. 26) and “Going Viral: From Ebola to COVID-19” (which takes its bow on Dec. 10 at 9 p.m.).

Kendra knows whereof she speaks. Other than establishing a network of bat disease ecologists in Western Asia, her vast experiences also included working in the Philippines (as a Fulbright fellow, almost 10 years ago), where she studied cave-dwelling bats’ responses to interactions with humans.

But there is another reason behind Dr. Kendra’s close proximity to the Philippines: She’s married to a Filipino (Jovenal Arañes), who proposed to her inside a cave! It’s safe to say he fell head over heels in love with Kendra “as blind as a bat,” pun very much intended. 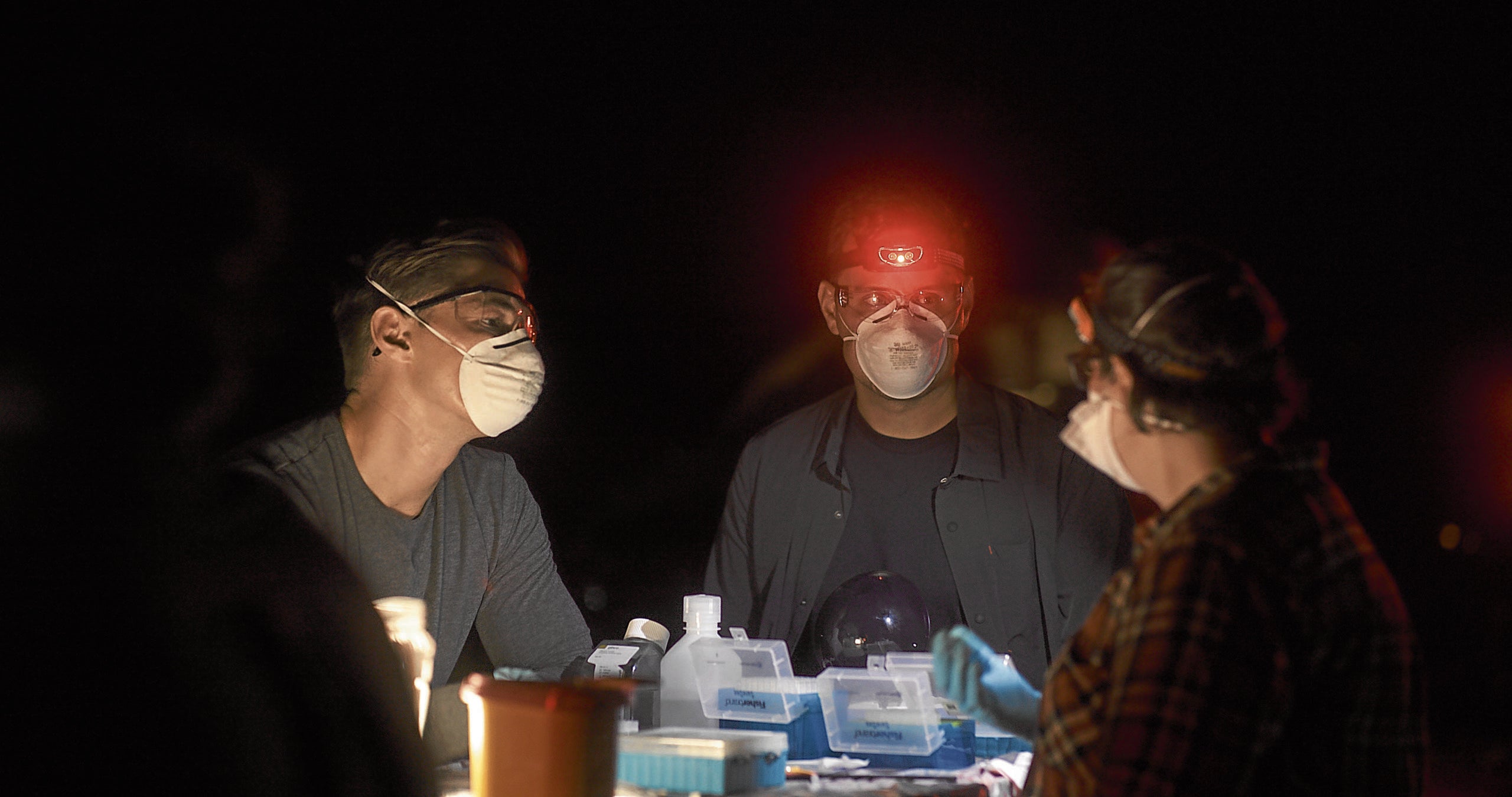 James Longman (left) and Chris Golden talk to Phelps about her team’s research on bats in Mersin, Turkey. —PHOTOS COURTESY OF NATIONAL GEOGRAPHIC

Our Q&A with Dr. Kendra:

If influenza is deadlier than COVID-19, why hasn’t it crippled world economies the way COVID-19 has? Not even the Ebola Zaire virus, which has a 90 percent mortality rate, was able to do that.

With Ebola, we’re talking about very different viral groups. There’s actually an Ebola virus endemic in the Philippines. It’s the only Ebola virus found outside of Africa, called the Reston Ebola virus carried by macaques, but it doesn’t have much effect on humans—which is quite unique.

People who work with pigs can get infected by it, but it doesn’t have the fatality rate of the typical Ebola Zaire (90 percent). Zaire, on the other hand, kills most of its hosts. Because the fatality rate is so high, it spreads throughout the population quickly, then burns itself out.

[For a virus] to be very successful, it has to have a low mortality rate and a very high transmission rate—which is what we’re seeing with COVID-19. This was the case with the great influenza of 1918, which killed millions very quickly. But now we have a vaccine for it. The worst part about this is that is we have flu going on at the same time as COVID-19. So, the combination of the two is very scary.

COVID-19 doesn’t have the highest fatality rate among coronaviruses that infect humans—that’s MERS, at almost 35 percent mortality rate. But we only see hotspots of that. But COVID-19 has done a pretty good job of having a high transmissibility from human to human, particularly when people are infectious without showing symptoms. That has played to its advantage, as well.

In terms of disease transmissibility, what do bats have that others like rats and insects don’t? Is it because of their ability to fly?

Well, there’s budding research into the immune system of bats speculating that flight is very “energetically expensive” for them. It raises their body temperature, so every time a bat flies, it gets a fever. So, viruses that evolve over time have had to adapt to an animal whose temperature rises [to a certain level]. Bats have viruses that are very virulent, and they have to adapt to a host that can raise his body temperature to a very high degree, which is usually how our body copes with illnesses.

In the docu, it was mind-boggling to see Ebola Zaire just stop infecting people. Isn’t that a possibility with COVID-19?

Ebola Zaire killed the entire village, so there was nobody left to infect anymore (laughs)—and that is its main crutch. It kills so quickly that it doesn’t have time to jump from human to human as quickly. But we’ve caught on to the fact that burial practices common to the culture in Central and Western Africa were actually routes of transmission. Once that connection was made, a public policy was created encouraging people to treat their dead differently.

Could you talk about your time here in the Philippines?

I didn’t spend a lot of time in Manila. I just remember Roxas Boulevard getting flooded regularly (laughs). But I heard that Duterte has cleaned up a lot of that area.

It was the first place I’ve ever lived where earthquakes and brownouts were common. I stayed in a rural area, not in a place like Makati. I remember brownouts with no warnings. I developed a lot of patience waiting for buses there, because I didn’t drive.

But everybody is so kind. And I have a very large family of in-laws there. My Filipino husband is one of 11 children! He’s Boholano. 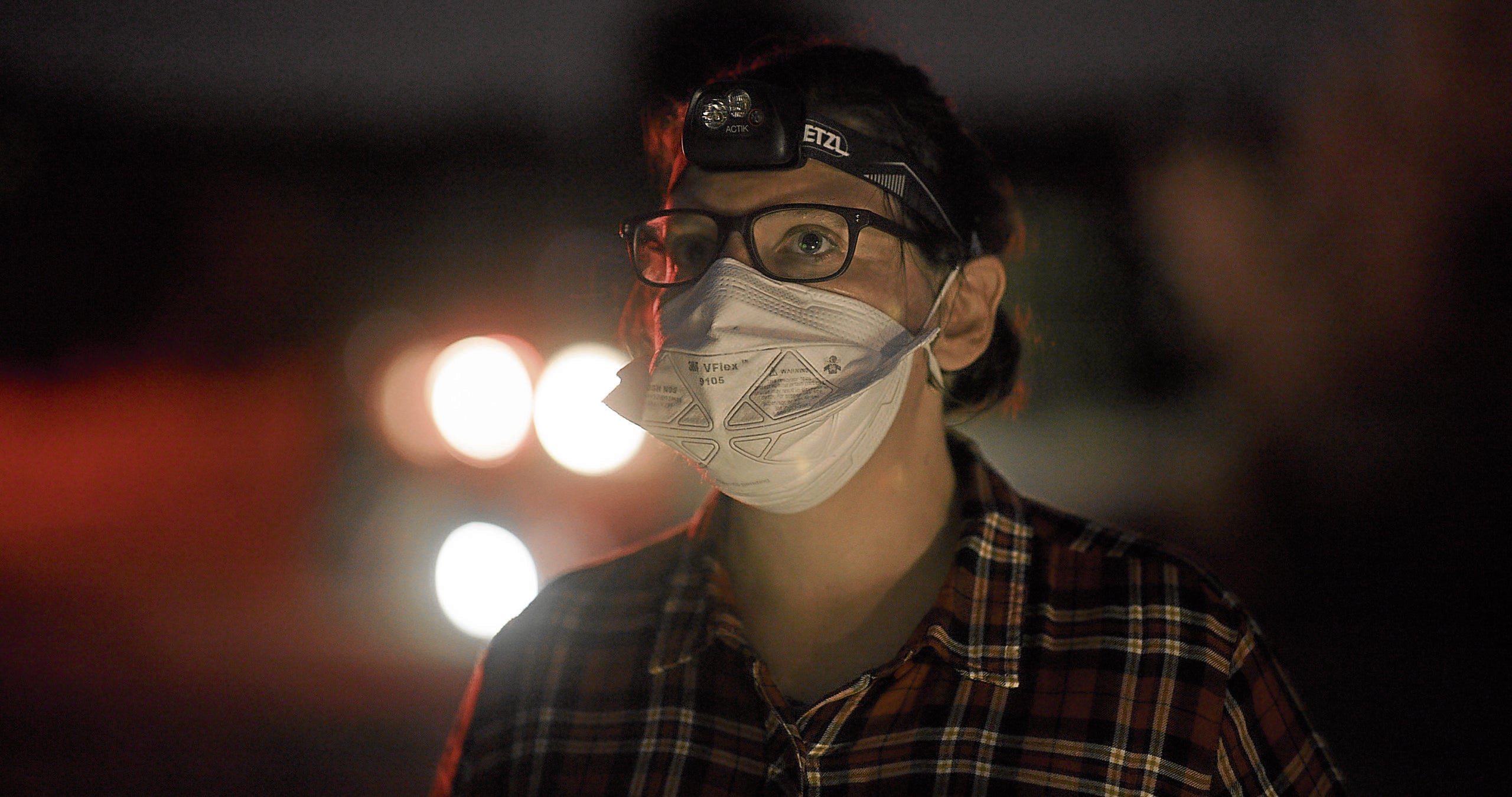 It scared me just by watching your team catch those bats in a cave in Turkey. Why do you pursue this line of work despite the risks?

I don’t feel like I’m in danger at all. Honestly, I feel most comfortable in caves (laughs), and I often joke that the most peaceful place you’ll ever take a nap in is inside of a cave. I’ve done that plenty of times, when I’m trying to catch bats and they’re not cooperating. So, I just lay a tarpaulin down and, before I know it, I’m knocked down sleeping—until I hear little chewing noises in my nets, and that’s when I know I’ve caught something.

The Philippines is full of caves. So, I’ve met a lot of crazy people via the caving society who like crawling through wild caves. I enjoy seeing bats roosting in the caves.

My husband even proposed to me in a cave (laughs)! So, that should tell you something about how much time spent in caves.

Do you see the Philippines becoming a hotspot for a possible contagion?

I’m actually putting together a grant to do some research, to test [the possibility] of that. I mean, we’ve had some outbreaks here, like the Nipa virus (NiV) in Mindanao, but those were very small outbreaks. Dengue is more of an issue there. But that’s something we’re interested in looking into—not only bats, but the rodents and primates, like the macaques in particular.

Even the tarsiers that you sometimes see at roadside parks—we know nothing about tarsier virology at all, yet people pay money to hold these animals. And obviously, they’re stressed out from being confined, so I am trying to do more work on that. We hope to do a proactive wildlife disease surveillance to figure out what viruses are out there.

And even though there’s the Wildlife Act or the Cave Protection Act in the Philippines, you still get people to go into caves. I’ve even caught some having discos inside caves… These are instances where we’re pushing ourselves into where these animals live—and they were there first! So, we’re kind of creating our own problems.

What do you think explains the cases of COVID-19 reinfection? And what can we learn from this pandemic?

We can learn that we still have a lot to learn. Still, we don’t know how long antibody responses would last. But we know from SARS that people typically showed the loss of antibody protection after two years. By then, SARS had already been eliminated.

But now, we’re seeing COVID-19 cases in the US where a healthy 25-year-old male, who was infected earlier in the pandemic, recovered, tested negative multiple times, then was later reinfected. So, we’re still learning about how our body responds to it, and how long the antibodies that are produced stick around.

We’re rushing to develop vaccines that, fingers crossed, are very effective. But how long those will last, it’s going to take time to find out. Will we be required to get booster shots on a regular basis, like the flu vaccine?

We need to come at it from a multidisciplinary approach, with biologists like me figuring out what can potentially infect people, then epidemiologists and virologists finding out how, and policymakers creating decisions that prevent it from happening. As you can see, it really takes a lot of different people playing together nicely.